In the aftermath of Hurricane Sandy, one smartphone feature seems to reign supreme for the millions of East Coasters without power: Battery life.

The vast, newly-christened New York City neighborhood of "SoPo" -- "South of Power," or anywhere in lower Manhattan below 42nd Street where electricity does not flow (until the power began to be restored on Friday evening, that is) -- has seen impromptu phone charging stations pop up in unpredictable locations to serve those who couldn't otherwise power up their phones at home. Hotels, banks and coffee shops have offered free power strips to passersby in need. A CNN news truck whose crew was filming in the West Village allowed anyone to charge devices. One man in Union Square hooked up a power board to his car battery and placed a homemade sign in front of his Frankenstein creation: "Charge Your Phone FREE."

A scrum of about a dozen New Yorkers gathered around his Jeep and waited in the cold, hands thrust in their coat pockets, as their phones juiced up.

So, sorry, Siri: In a neighborhood without electricity, where working power strips and outlets can be miles apart and difficult to locate, the amount of juice your gadgets can get out of a single charge has suddenly become paramount. In "normal" times, battery life is not the sexiest tech spec, nor the single facet of a smartphone you should make your purchase based upon. But in the past few days its relevance for those without electricity has been crystallized.

It's a Swiss army knife that only works with a juiced battery, however, which is why we thought we'd survey the smartphones, tablets and laptops currently on the market that deliver the most power on a single charge. These gadgets represent the upper limits of battery life in their respective fields, and though they are not, necessarily, the "best in class" overall, they do deserve plaudits for their superior power-packing capabilities.

There are a few different ways to measure battery life on smartphones. Three of the most common are talk time, video playback time and web browsing time. Each smartphone can vary in how well it performs in those three different fields, though typically phones with strong batteries will rank at or near the top in each category, while phones with weaker batteries will rank near the bottom.

When you view the expected battery life of the Droid Razr Maxx in graph format against any other phone, the results often appear hilariously skewed toward Motorola's flagship smartphone. GSMArena, a technology blog that runs extensive battery-life tests on various smartphones as part of its typical review process, found that the original Maxx got more than 21 hours of talk time over a 4G connection. The next-closest competitor got 20 hours and 30 minutes in talk time -- impressive, until you realize that the next-closest competitor was this year's successor to the original Razr Maxx, the Razr Maxx HD.

After those two, Samsung's Galaxy Note II achieved 16 hours of telephone time -- a full five hours behind Motorola's battery behemoth -- and the numbers only declined from there. 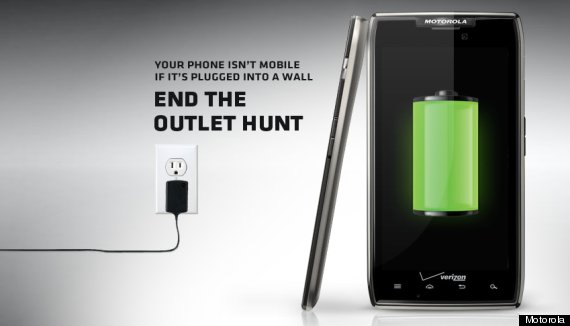 An advertisement on the Motorola website for its Droid Razr Maxx HD. (Motorola)

Again, that's only one metric, on one site, but if you're scanning through different tests, the Droid Razr Maxx typically appears either at the top or just below the top of most battery torture tests.

Other smartphones do approach it, however. The large Galaxy Note II, for example, offers much improved battery life from the first version: Laptop Magazine actually found its battery to be more impressive than that of the Maxx, and other sites have its test scores sitting just below it. Apple's iPhone 5, despite a battery that is physically smaller than those in the Razr Maxx and Galaxy Note II, also performed well in the battery tests of GSMArena and the highly-respected technology site AnandTech.

AnandTech's writers also found the HTC One X, recently refreshed and available on AT&T, to be one of the top battery life performers. Those three smartphones, however -- the One X, the iPhone 5, and the Galaxy Note II -- all generally withered during testing in comparison to the Droid Razr Maxx, their screens going dark far before that on the Motorola flagship phone.

Again, strong battery life should not count as the only factor you use to choose a new smartphone. Too many other factors -- speed, reliability, features, cost and more -- also matter to leave your decision to a simple Talk Time hour count.

And, too, if you're trying to conserve battery life now, there are many excellent Internet guides that can help you accomplish just that on the phone you do own: Wired has published a thorough explainer in the wake of Sandy, as has CNET. For iPhone owners, HuffPost Tech has prepared a battery-saving guide as well, which you can read here.

Battery Life Champions: Smartphones That Get The Most Power On One Charge
7 Comedians Rant About Tech
1 / 9
Louis C.K. On Ungrateful Smartphone Users
"Everything is amazing and nobody's happy. [...] This is what people are like now, they've got their phone, and they're like, 'uhhhh, it won't--' GIVE IT A SECOND! It's going to space. Can you give it a second to get back from space? Is the speed of light too slow for you?"