How many of our fathers, uncles, grandfathers, great-grandfathers fought in the Battle of the Bulge in WWII seventy years ago?

Let's not forget the war efforts of the distaff side, our mothers, aunts, grandmothers, great-grandmothers.

Vassar classmate Caroline Cleinman's mother, Clara Ofenloch McCormack and Aunt Caroline Ofenloch, for whom she is named, were both First Lieutenants in WWII's Army Nurse Corps on opposite sides of the globe, her mother in the Battle of the Bulge, her aunt in the Philippines.

As 70th anniversary remembrances wind down, the Battle of the Bulge, also known as the Ardennes Campaign, remains the U.S. Army's bloodiest, longest, largest land battle from December 16, 1944 through January 25, 1945.

Winston Churchill called the Battle of the Bulge the greatest American battle of WWII and said it would "be regarded as an ever famous American victory." The Oxford Guide to WWII, published by Oxford University Press, 1995, p. 40.

Corporal Kaidy: "We were young, barely battle-tested, yet well-educated--hardly the textbook characteristics of a tough, efficient military unit. Exhausted from a bone-numbing 300-mile road march in open trucks from Germany's Saar Valley by way of Rheims, France, on Dec. 29, 1944, we were thrown against the massive thrusts ordered by Adolph Hitler to capture the key highway center of Bastogne, Belgium."

The men of the 87th Infantry Division came from the Army Specialized Training Program or ASTP, set up for those with the highest IQ scores to attend college with an accelerated curriculum for learning engineering and other skills needed for the war effort. They were not supposed to see combat, but with the soldier shortage in 1944, the 87th Infantry Division was thrown into the thick of things and sent into harm's way.

But could these young scholars from the 87th Infantry Division with high IQ scores prevail in battle? That was the question waiting to be answered.

I had the honor of meeting and later becoming friends with Mitchell Kaidy, first at the 87th Infantry Division's reunion in 2006 in Arlington Heights, Illinois and later at its legacy association's reunions for veterans and their sons/daughters in Pittsburgh in 2010 and 2011. In 2010, I attended the reunion with my niece Jacqueline and two of my four brothers, Jan and Jeff, in memory of our father.

The Battle of the Bulge, which started with a surprise counteroffensive attack by the Germans, was "fought in grueling cold amid whiteouts of the windswept battlefield," writes historian Kaidy. Trench foot, frostbite were common among American soldiers, including my dad. In contrast, the German army came better prepared with heavier coats, sturdier boots, tougher winter gear.

Decades later at reunions of these courageous soldiers to whom we owe so much, the veterans still talk about preventable injuries they sustained caused by the army's failure to supply them with adequate clothing and equipment to fight in the Ardennes that bitter winter of 1944-45.

"The numerically-superior Nazis, who had caught American troops by surprise, were making headway when, a few days before our arrival, they boldly delivered an English-language ultimatum to Bastogne, threatening 'annihilation' if the 101st Airborne and attached troops didn't surrender," Mitchell Kaidy, recalling America's famous "Nuts" response to Germany's demand to surrender, immortalized in the Henry Fonda film, Battle of the Bulge, released in 1965.

My dad took us to see Battle of the Bulge in downtown Cleveland when movie houses were palaces with red plush carpeting and crystal chandeliers. Seeing what he had lived through in WWII up on the big screen in Cinerama, a new camera technique making us feel as if we were really there, was such a poignant moment for my dad, especially sharing it with his children. In the closing credits, the film is dedicated to the million who fought in the Battle of the Bulge.

Victories by the 87th Infantry Division in towns outside of Bastogne at Libramont, St. Hubert, Moircy, Pironpre, and Tillet "broke the back" of the German counteroffensive and liberated Bastogne, critically important in winning the Battle of the Bulge, assesses historian Kaidy. Overcoming youth and inexperience, hellish weather, and not enough time to conduct adequate reconnaissance, coupled with the 11th Infantry Division's not being able to coordinate with the 87th as planned, due to the 11th's massive casualties, all this made the 87th's harrowing victories, including hand-to-hand combat in Tillet, even more impressive.

Maj. Gen. Troy H. Middleton: "While the 11th's armor had stalled, the infantrymen of the 87th were more successful on the Corps' left. On Dec. 31, Jan. 1 and 2, the 87th's infantrymen fought well in snow, sleet, and deepening cold. They accomplished their mission of cutting the highway linking the Germans at St. Hubert with supply sources back in Germany." From Middleton's biography on p. 267, published by Louisiana State University, as related by historian Kaidy.

Gen. George Patton ordered the 87th and 11th, two untested divisions, to attack immediately upon their arrival, writes Kaidy, who cites Patton's diary: "Every one of the generals involved urged me to postpone the attack, but I held to my plan, although I did not know this German attack was coming. Some call it luck, some genius. I call it determination."

The young, inexperienced scholars with high IQ scores, had prevailed despite being far outnumbered by the Germans on the battlefield. 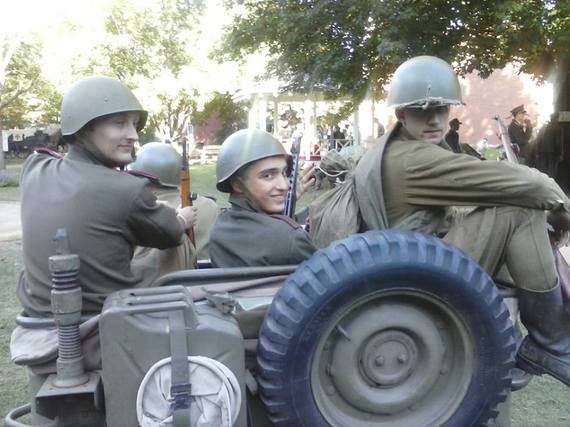 More than 1200 WWII re-enactors come from all over the globe, wearing authentic uniforms and helmets with vintage WWII tanks and jeeps, camping outside in tents, engaging in narrated field battles that include pyrotechnics. Quite the production!

"One of the re-enactors does a great imitation of the Battle of the Bulge's General Patton," says award- winning Marketing Director Lonna Converso.

Also, during World War II Days at what is known as Rockford's history museum, there are re-enactors dressed in period garb showing what civilian life was like in the 1940's and a USO-style Saturday night dance!

My dad, like many of his generation, never talked much about the war. Except when our red-and-white station wagon would careen on Cleveland's icy winter streets or driving through blizzards. Then dad would calm our fears of ending up in a ditch or worse, telling us this was "duck soup" compared with what he went through in WWII. That we'd make it home okay. Unlike our men and women in uniform in harm's way, who don't make it home okay.

So, whenever I see someone in uniform, I make a point of thanking him or her for their service. Whatever the war. Wherever they're stationed. Hope you do, too.

Lonna Saunders may be reached at lonna2@msn.com