Who knew that politicians were even bigger, lustier love objects than even Hollywood's most infamous ladies man — George Clooney? I mean really could even America's Sexiest Man Alive have managed to have multiple affairs while also holding down a steady or somewhat steady relationship like New York's new luv gov — David Paterson?

Those of us who cover Hollywood regularly and have covered the antics of Britney, Tom and Lindsay have come to the steadfast conclusion that truth definitely trumps fiction. We never in our most imaginative dreams could have made up the scenarios that this trio, for example, has lived through.

Now, we need to extend 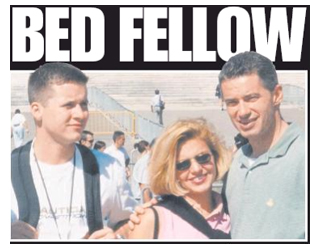 our thinking. It seems that politicians out-trump even the most supposedly seductive stars when it comes to racy sex lives.
In the last few weeks we've reeled from hearing about ex-New York Governor Eliot Spitzer's hooker hookups, to former New Jersey Governor Jim McGreevy's three ways with his ex-wife Dina Matos and ex-driver Teddy Pedersen. Now, just when we thought we were getting a real deal Mr. Squeaky Clean to replace the former Mr. Mean and Clean Spitzer, we find out that both David Paterson and his wife Michelle have had self-confessed multiple affairs during their 15 year marriage.

I have to hand it to these politicians; they must be even hornier and handier than Hollywooders, even if they ain't handsomer.

And Hollywooders have really good excuses for falling off the monogamy wagon. As LA-based marriage and family therapist Dr. Jenn Berman, who even treats Big Names, points out, "It's hard for anyone to stay faithful, but when you're in a career where women are showing up at your hotel room door or are throwing panties at you when you perform on stage, it brings a whole new level of challenge to monogamy."

Plus, points out New York divorce attorney Vikki Ziegler, actors and actresses "are often away from their spouses for long periods of time shooting movies or TV shows with other very attractive people and they have lots of money" to book romantic hideaways.

And let's not forget that when gorgeous actors and actresses are thrown together, they often have very long hours on secluded sets away from spouses and it can be their job to "act" in multiple romance and sex scenes. They have a license to make out with each other. They also have their own personal private trailers to retreat to together to "rehearse" and they stay in luxurious suites at hotels with their own security teams to keep them safe from prying eyes.

"In many celebrity families there is a 'don't ask, don't tell' policy between spouses when one or both of them are on the road, on tour or on set," reveals Dr. Berman, author of the "A to Z Guide to Raising Happy Confident Kids."

Now consider politicians — the challenges to cheating are much greater, at least if they don't want to be caught. 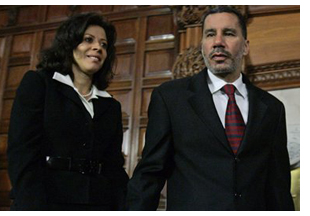 They don't have the multimillion dollar paychecks so they can't afford fancy hotels. Governor Paterson had to go to a Days Inn on Broadway in New York City to conduct his sexy assignations. Even if they have the moolah like Eliot Spitzer, the IRS keeps a close eye on their "shell accounts." They are rarely as gorgeous as a Brad Pitt, Jude Law or David Beckham, so they have to work harder to find their cheatee or they have to pay for them (Spitzer) or put them on the payroll (McGreevey). They also have to work harder to stay undercover. They don't just have the press and paparazzi on their trails, they also have determined opposing politicians looking to dig up any dirt they can find.

"Celebrities don't run on a platform of being righteous — we expect their marriages to end. We expect them to be narcissistic, self-consumed and hedonistic," points out psychologist Dr. Victoria Zdrok, author of the book Dr. Z on Scoring. "However, we still have the expectation that at least some politicians believe in the values they espouse." Funny us.

This means the penalties for being caught are even greater for a politician than an A-lister. Actors won't lose their next movie role if they cheat, but for politicians...well, we've seen what can happen.

So why are these politicians so driven to do It? "They must have something extra — it takes a lot of risk, strength and power just to go into politics. There's something that they have in extra sizes," believes New York Post uber gossip columnist Cindy Adams who is renowned for covering both the worlds of Hollywood and politics. She points out that actors also have the easier exit from a less than sexually exciting marriage. "Actors get divorced more. They're on to the next in 20 minutes. And they get PR from it all — PR from, 'they're dating, they're engaged, they're living together, they're getting married, they're having a baby,' and they get off on that PR," says Cindy.

Politicians on the other hand are generally more electable if they're married and even their wives — hello Silda Spitzer, Michelle Paterson and Dina Matos McGreevey — also have a big stake in the power and prestige that comes from being the governor's wife, according to Dr. Zdrok. "Both members of the marriage are interested in having "the appearance of a marriage. It's convenient."

This for me all adds up to a definitive conclusion — politicians are the more hardcore cheaters. They take more risks to do the deed and they get fewer benefits since ultimately they need to stay in their marriages. That doesn't mean that Hollywooders aren't going to keep up with the cheating challenge. Just this week, Star is lifting Hollywood bad boys back into the headlines, breaking a story in which insiders are claiming that "Dancing with the Stars" star Drew Lachey, who is married and has a baby, has cheated on his wife with his dancing partner Cheryl Burke.

Maybe those evolutionary psychologists are right after all — monogamy isn't a normal state for humans, or at least not for political and Hollywood stars.

So what do you think? Who are the bigger, badder, cheaters: politicians or Hollywooders? 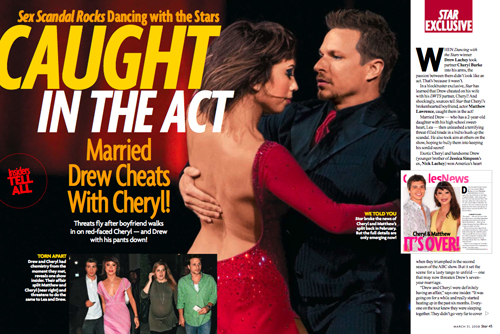