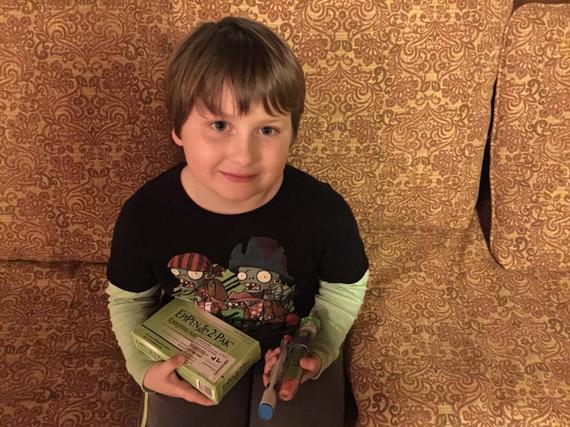 Can we talk about the exorbitant cost of EpiPens?

Let's face it: Another person whining about the high cost of health care in America.

Hell yes, I'm complaining! I just had to pay $440 for two EpiPens so my son, um, won't die if he inadvertently eats a tree nut.

According to the FARE (Food, Allergy, Research and Education) website, researchers estimate that up to 15 million Americans have food allergies and that this potentially deadly disease affects 1 in every 13 children (under 18 years of age) in the U.S. That's roughly two in every classroom.

But did you know that state law requires all students with life-threatening health conditions, such as nut allergies, to have medication for each child prior to attending school?

What if you can't afford one?

When I was a kid, I didn't know of one kid who had a nut allergy.

And I'll admit I blamed all of the other preschool "helicopter parents" who were stopping my kid from the freedom of eating his beloved peanut butter and jelly sandwiches for snack.

I became a believer when I handed our 3-year-old son, Patrick, a granola bar he'd never tried before (it had tree nuts, not peanuts), which he summarily projectile vomited all over and was immediately covered in hives.

Afterward, my son was diagnosed with a tree nut allergy that required a yearly prescription of EpiPens.

And thankfully, for the last five years, although it's a condition that could potentially be fatal, we have been fortunate to have an ample supply of EpiPens.

Like clockwork, once a year we got a 'script from his allergist, which we brought through the drive thru pharmacist, and in roughly the same amount of time it would take to order a chai latte we had a to-go-sized bag filled with boxes of EpiPens for a $50 co-pay.

We were swimming in EpiPens!

Enough to store one in each of our family's two vehicles, at our house, at grandma's, at the neighbors...

We were pretty clueless about how lucky we were. Although, one year I do remember driving away with another year's supply of EpiPens and my 8-year-old daughter holding up the bag, saying, "Wow, Mom, in the corner of the receipt it says, 'your insurance saved you $1,200.'"

My husband had a great job as a computer programmer, and I was thankful that our family (we have five kids) had access to life-saving medicine.

The cost of EpiPens only became relevant when I received a warning from the school nurse that Patrick's EpiPen was due to expire Jan. 31, and we needed to replace it or he wouldn't be allowed to attend school.

Our "new" high-deductible insurance it would cost us $440 out of pocket (which includes the use of a coupon that the Mylan Company, the makers of the EpiPen, passes off to patients as a $0 co-pay when really it only takes off $100).

Our stockpile of cheap EpiPens had lulled us into middle class complacency. And, like a rooster comin' to call, our cache of EpiPens were useless.

Laying awake the other night, I wondered how we would pay for the EpiPens.

My husband had researched options online. Surely this was a mistake. How could a once-cheap medication now be so expensive?

According to an article on NerdWallet, there is no generic EpiPen available due to the manufacturer's patent. Because of this, Mylan, the maker of the device, is allowed to charge what it wants without direct competition. And what it charges is alarmingly high.

Apparently we could buy one from England for $120, with a minimum purchase of two. Or we could drive to Canada and buy one for $100.

On the one hand, I was being stubborn. It would be difficult, but we could afford it.

I thought of a friend whose son has a nut allergy. I could offer her a couple hundred dollars for a couple doses if she had extra? I would certainly rather give her the money than the Mylan Corporation who manufactures the drug.

I wondered it that was even legal?

The FARE website advised that the economic cost of children's food allergies is nearly $25 billion per year.

The school nurse seemed so relieved when I delivered the EpiPen on Feb. 1 I told her I was writing a piece about the situation.

"I know I shouldn't be saying this, but try to get the story national," she whispered. "This is so hard on families, especially the working class, and the medicine is for children! Make sure that you explain to parents to insist on an EpiPen from the pharmacist that expires in a year. So many parents have bought EpiPens from pharmacies that push their old stock and give them prescriptions that expire in six months!"

I can't tell you how many times people say that health care for the middle class is in the toilet because of Obamacare.

I grew up poor with a single parent, and not having health care or food is something you don't and shouldn't forget.

I wholeheartedly believe in universal health care for all, even if it messes with our family's once "cush" situation.

Like most parents, of course we would and did pay, and in the larger scheme of things, our son's health trumps all.

But this whole thing feels rotten.

Here's an excerpt from a recent NPR interview:

"A slick marketing campaign is part of the reason why. That campaign included lobbying Congress to get EpiPens in schools. Forty-seven states now suggest or mandate that schools have such devices on hand. ... As the popularity of EpiPens has grown, so has the cost. The wholesale price of the drug has increased by about 400 percent as it has been heavily marketed."


I have a serious problem with drug companies grossly taking advantage of people, especially children, because they can.