It's an epic battle that has been raging since before humans walked the earth: and with a business like ours, we hear all about it, all the time. Which sex truly reigns supreme? While it may be a futile and moderately subjective debate, it is one that will never really be put to rest. So, we hoped to break some ground on this hot debate by sharing some of the most interesting battles of the sexes going on in the animal kingdom.

Ladies, you know how much time and effort you spend on getting yourself dolled up before a date, hoping to attract your man? Well, these dudes can relate. The more colorful and brighter a male's feathers are, the more likely a female is to mate with him. The female doesn't have to worry about whether her feathers are bright... or whether her eyeliner is even. Must be nice. 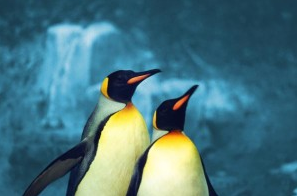 The male and female penguins are similar in appearance, but their behavior is what sets them completely apart. Once a male and female have laid eggs, the female ditches to hunt and gather food for her babies when they're hatched. Meanwhile, papa penguin is keeping the eggs warm back home. He's got the whole stay-at-home-dad thing on lock. 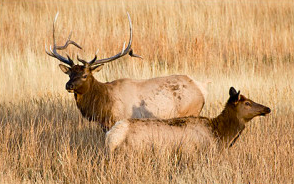 This species mostly hangs out in same-sex herds, chilling together with their own kind. When it is time to mate, the male elk have to worry about who has the largest antlers and who can yell (or, known as "bulge") the loudest. These two factors are what attracts the females the most. The female elk only has two offspring tops, so there's none of that Mom-and-Dad-elk-plus-eight stuff here. 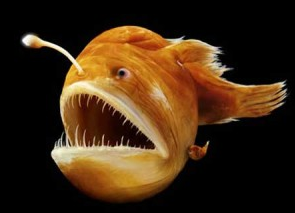 Easily the most radical creature on this list; prepare yourselves. The female angler fish has a spine with a luminescent bulb attached to help attract prey. Her jaw is so huge that she can actually swallow prey up to twice her size. And the male? He spends his whole life searching for a female anglerfish to attach to. When he does, he completely melts into the female, leaving only his testes. And this is how baby anglerfish are born. I think it's clear who won this battle. 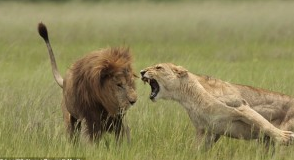 While lions are considered the king of the jungle, it is the female lions who are the main hunters of the species. The females join hunting parties and can kill animals much larger than themselves-up to 1,000 pounds. That's pretty badass if you ask me. And the males? They stay home, combing out their manes, trying to look all tough. Sound like anyone you know? 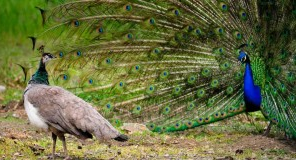 The male, known as the peacock, has what the female doesn't: a beautiful, train of colorful flowers, that can reach up to five feet. The female's feathers are mostly brown, grey, or white. Females can get quite aggressive when it's mating season, all fighting for the top peacock... sounds a lot like "The Bachelor," right?

More:
Dating Advicedivorcelet gobreakupbattle of the sexes
Newsletter Sign Up
An essential daily guide to achieving the good life
Subscribe to our lifestyle email.
Successfully Subscribed!
Realness delivered to your inbox