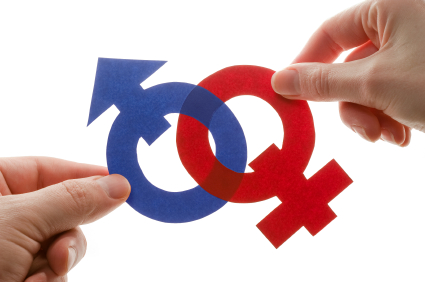 I'm just going to put it out there: Women are better than men. I don't mean in everything, just most things. And especially in the sick and ailing department. Let the hate mail begin.

Let's just call it like it is. Women take pain, panic, worry, anger, hurt and fear without missing a beat and all the while, wearing a smile. Not to mention the fact that we deal with bloating, bleeding, hot flashes, failing bodies, fickle children and wandering husbands, all with a grain of salt, a dose of drama and a nicely prepared meal on the table. Bam! We are nothing short of amazing.

What brings this topic to the forefront, you ask? My fiancé is facing a small surgery this week. He took a tumble while out walking and it resulted in a torn rotator cuff. Ouch! After a series of x-rays and an MRI, the surgeon was scheduled and the procedure arranged.

I love this man, but you would think he was going in for open heart surgery or an arm amputation. There is severe angst, planning, building panic and more planning. There is no question that this is a painful condition to suffer (you'd be surprised how many times you rotate your shoulder). But, this surgery is an outpatient procedure and he will be home safe and sound tucked in his bed the very same afternoon. I'm thinking his job is easy: he sleeps through the procedure and rests in bed for a few days to recover. And yet the anxiety mounts. His, not mine.

As for myself, I am tapping into my immense but dwindling supply of patience and understanding. The former running a bit low as the big day approaches. My job will be to take care of him, feed him, change his dressings and make sure his pain meds are taken regularly. All the while, not allowing his demanding neediness to provoke me to want to suffocate him in his sleep with his pillow.

Just as a point of reference, when I had foot surgery, he placed juice and food bars on my nightstand and disappeared for hours. But I digress.

He has spent hours on the phone with the insurance company to secure the EZ Ice Therapy unit. A wildly expensive contraption that amounts to two old fashion ice packs secured in a sling. Really. This is where I mention that I managed just fine with multiple one gallon zip lock bags filled with ice. Just saying.

In his defense, I don't think his reactions are exclusive to him, but rather a standard response of the male species towards anything that may involve pain or require that they relinquish control. How many times has it been said that if men endured the pregnancies, the planet would cease to be populated? Or the fact that when a woman catches a cold, life goes on. But when a man catches a cold you would think he is walking the Bataan Death March. Men are babies, plain and simple.

Still, one has to wonder: If men are the weaker sex why do women need them to kill spiders, catch mice, take out the Christmas tree and solve internet access problems? There is some poetic justice there.

Every woman knows that I'm telling the truth and nothing but the truth. Every man will know it in his heart but will offer reasonable and good explanations as to why they are the way they are. We love our men, but many of us wish their mothers had done a better job at toughening them up for the inevitable sniffles, bruises and breaks that life brings to us along the way.

In the meantime, Steven and I have come to an agreement to better help us get through this major trauma. I'll try not to commit homicide if he tries not to provoke me.