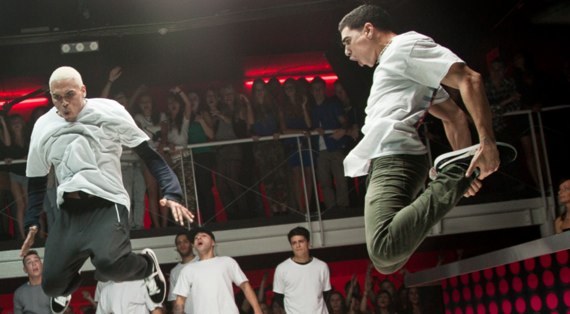 If you find yourself at parties asking, "Hey, whatever happened to break-dancing movies?" you are in luck. There is a movie about break dancing called Battle of the Year, and it will be at your local movie theater this Friday. Battle of the Year stars Josh Holloway (who you remember from Lost). He doesn't break dance in the film, and is probably wondering what he's doing in a break dancing movie as much as you are. Chris Brown is also in this movie, so ... yeah. Anyway, as a service, we answer every question that you could possibly have about Battle of the Year.

Q: Will I enjoy Battle of the Year?

A: If you've ever thought to yourself You know, I like Breakin', but I wish it had less plot, then, yes, you might.

Q: Will I find myself rooting for the dancers in Battle of the Year?

A: If you've ever thought to yourself You know, I like Breakin', but I wish Turbo had been played by a guy I don't like in real life, then, yes, you might.

Q: Why is Josh Holloway in this movie?

A: Josh Holloway plays Blake, a tough-as-nails coach who is begged by a man named Dante (Laz Alonso) to take over the American B-boy team. At first, Blake refuses.

Q: What does B-Boy stand for?

A: Blake lost his wife and child in a car accident two years prior to the events of this movie. Blake is also now an alcoholic who drinks booze from a flask.

Q: Does the line "This was a prison visit and this is your cell" convince Blake to coach the team?

Q: Is there a dramatic moment when Blake looks at that flask, shakes his head in a not today type fashion, then throws the flask in the trash can?

Q: On the night that Lost aired its final episode, did Josh Holloway participate in a Jimmy Kimmel comedy sketch that foreshadowed his break dancing future?

A: Yes. Holloway jokingly said that his next movie will be Snakes on a Plane 2: Electric Boogaloo.

Q: What's the best part about that video?

A: That we actually get to see Josh Holloway dance.

Q: What's the saddest thing about that video?

A: That Snakes on a Plane 2: Electric Boogaloo sound like a much more interesting movie than Battle of the Year.

A: Did you not watch that video of Josh Holloway?

Q: Do we at least get to see Blake break dance?

A: For better or worse, we do not get to witness the break dancing styles of the man who played Sawyer on Lost at any point during Battle of the Year. Blake is a former basketball coach and, along with his assistant, Franklyn (Josh Peck), is there to install discipline into his new team. Though, he does seem to understand more about break dancing than most normal human beings.

Q: What is Franklyn's most overly dramatic line of dialogue in Battle of the Year?

Q: What is the goal of all this?

A: To win the Battle of the Year, a break dancing competition in France that the United States hasn't won in 15 years.

Q: At your screening, how many minutes was the 3D so out of whack that it caused an almost kaleidoscope effect?

Q: Did the theater apologize for those 20 minutes of your life?

A: No. Then again, they didn't apologize for the other 90 minutes either.

Q: Is the Sony Tablet properly advertised during Battle of the Year?

A: Yes, along with many, many other Sony products.

Q: So does most of Battle of the Year depict what happens at the dance competition?

A: Most of Battle of the Year consists of training montages, watching people running laps and, every so often, a personal squabble between dancers over a variety of nonsense.

Q: Do the dancers actually engage in physical altercations?

A: There's a lot of tension because it's three months of training and, once a week, a dancer is sent home, a la Survivor or American Idol. There's one true fist fight, but most of the time it ends with someone getting flipped the bird. There is a remarkable amount of bird flipping in Battle of the Year.

Q: What was your favorite break dancing name in Battle of the Year?

A: Of the many, many choices, I'm going to have to go with "Intricate."

Q: What's the best thing about Battle of the Year?

A: Chris Brown's sure to be Oscar nominated turn as "Rooster."

Q: Without using sarcasm, what's the best thing about Battle of the Year?

A: The dancing. Of course it's the dancing. Though, the rules of the competition do seem fairly arbitrary. There doesn't seem to be any explained reason why any one team is awarded more points than any other team.

Q: What's the worst thing about Battle of the Year?

A: This is by no means a good movie, but there are sequences that could be considered fun. Though, Chris Brown's presence is legitimately distracting, to the point that I often found myself rooting against the team that the movie wanted me to root for.

Q: After a massive change of heart by the French crowd, what's the only thing missing from the ending of Battle of the Year?

Q: If you're going to be blurbed in this weekend's commercials for Battle of the Year, what quote do you assume will be used?

A: "Reminiscent of Rocky IV!" - Mike Ryan, The Huffington Post