Battlefield Earth may go down as one of the most controversial books of all time. Written by Church of Scientology founder, L Ron Hubbard, Battlefield Earth was published in 1982 to mixed reactions. The novel was criticized as a bloated and reductive science fiction adventure meant to propel the ideals of a strange faith. Things didn't get better when the "best seller" status of the book was revealed to be the product of a book buying campaign from the church. Everything came to a head in 2000 when the film adaptation was released. A film Roger Ebert called "unpleasant in a hostile way."

All that controversy begs the question, why would anyone attach themselves to the property now or ever. Well, voice actor, impressionist, and director Jim Meskimen is doing just that with the Battlefield Earth audiobook. It seems if we're able to look beyond the baggage of the novel, there is an incredible science fiction journey that is relatively well received among general audiences.

I caught up with Jim to discuss directing the audiobook adaptation, the themes of the novel, and what compelled him to take on the job that seemingly no one wanted to do.

The audiobook clocks in at a massive 47 hours long. What made you want to take on such a task, and why Battlefield Earth?

Jim Meskimen: 47 and a half! I was a big, big fan of the novel. I read it when it first came out, in paperback when I lived in NYC, and I missed sleep, subway stops and appointments reading it every spare minute I had, getting totally transported by the story. I subsequently returned to the novel every couple of years to enjoy it again. It's so rich and the suspense just "reboots" with each new reading.

A few years back, I had been hired by Galaxy Audio to direct multi-cast audiobooks of the early pulp novels, the westerns, sea and air adventure, fantasy and sci fi stories Hubbard wrote in the 1930's and 40's, and had a wonderful, totally fun experience bringing those to life (the Stories From the Golden Age series) and soon after we finished that the opportunity arose to tackle Battlefield Earth.

After the cinematic failure, what made you want to adapt Battlefield Earth into an audio book? What was difficult in approaching talent to cast in the audio book?

The main problem of the film is that in adapting this huge story and vast canvas of the almost 1000 page novel, certain compromises were unfortunately made. The script omitted the Scots, for one, which was a big heartbreaker for a lot of the fans. Actually, I don't think it's quite as bad a movie as it's made out to be, but it was rather ambitious, and sometimes movies are savaged by critics simply because they don't measure up to those grand aims.

For the time, I think it was a pretty well told story, especially for the budget they had, and it was an attempt, anyway, at translating the massive action of the book. I think it could eventually inspire a longer form, Game of Thrones approach for a TV show or series. It's certainly a rich and engaging enough plot, and the characters, as they are in the book, are some of the most carefully and consistently developed in the genre.

There weren't difficulties in approaching the cast, particularly. I think everyone knows that audiobooks are a different animal than films, and the professional voice actors we contacted were very attracted to the kind of characters and scenes that we were offering them. Voice actors love this kind of story, indeed, this is the kind of story that many of us got into voiceover to do.

How did you take the spirit of L Ron Hubbard's vision and inject it into the audio book?

I'm an admirer of Hubbard. I've read and directed most of his published fiction, and he has a very clear objective in his storytelling. It's artful, and diverse stylistically, but actually quite easy to follow, and I appreciated as a director that he made the intentions of the characters, and the action and settings quite real. His style could perhaps be called "old school", but it's real literature. He has a way of painting a very clear picture in the mind of the reader, or in our case, the listener. You can't direct 100 hours of his stories and not come away with less than a profound respect for his writing, not to mention the wealth of original ideas.

As he mentions in the Introduction to Battlefield Earth, "Some of my readers may wonder that I did not include my own serious subjects in this book. It was with no thought of dismissal of them. It was just that I put on my professional writer's hat. I also did not want to give anybody the idea I was doing a press relations job for my other serious work."

That being said, it's still a story about integrity, and strength of character that harmonizes well with his other contributions.

What was the most challenging aspect of directing the adaptation, did you take any liberties with the story?

We took zero liberties with the story. It's complete and unabridged.

The big challenge, which we didn't collide with on the recordings of his early pulp work, was the massive scope of the novel, and the need to record over 100 characters, as well as the narrator. I never saw a complete script, but if I had, it would have been over 2000 pages long at least. Compare that to the typical Hollywood movie script page count of 150.

It was clear that we needed a new production approach, and we settled on recording each actor separately. I spent months in the booth beside the narrator, Josh Clark. I found being actually in the booth near to the actors was a more efficient way to direct quickly and with each performer, many of whom played multiple characters.

The good part of that way of working was that we got excellent recordings of each actor; the tough part was that I had to read the dialogue against them, and somehow keep the level of performances in my mind that we had already recorded, or would be recording. As it happens, I was able to do a fair job of it. And since I'm an impressionist, I would often just imitate what I'd heard the other absent actor do, or imagine what they would do at a later session. I got to be pretty good at it!

Why is Battlefield Earth important to you? What does it say about us as a species and what challenging questions does the narrative ask?

Battlefield Earth asks a question that is very intriguing; if we aren't indeed alone in the universe, as many believe, how should we prepare for a threat from an outside civilization who, like the Psychlos in the novel, might be at some future date be determined to rob our planet of natural resources? Could the devastation that was brought in the early history of America on the Native American nation, with disease and conquest, befall an entire planet at some point, and how could mankind work together to plan a defense? Interesting question, and typical of the kind of prescient questions asked by sci fi authors since the "Golden Age", and right up to the latest Star Wars or Star Trek offering. 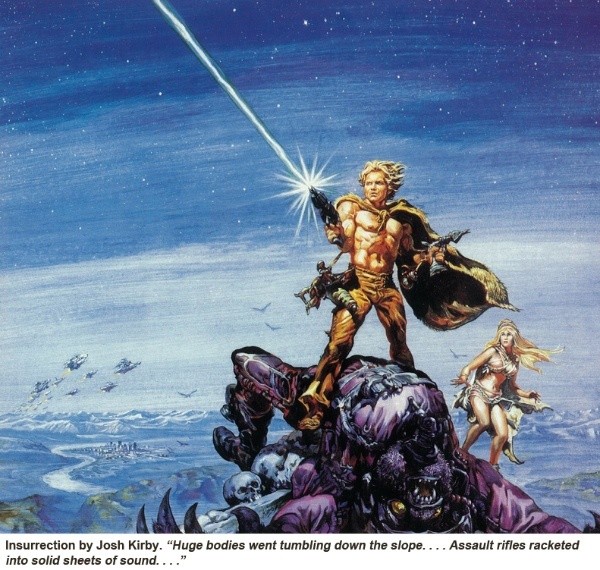 The audiobook is #1 nationally and as you may know the book was the subject of a massive book buying campaign from the Church Of Scientology. Does the Church have anything to do with the success of the audiobook?

Battlefield Earth has been a global phenomenon since its first publication. I'm sure church members have been part of the large buying public, but are by no means the only people who appreciate an escape into a great novel.

The fanbase for sci fi, as you know, is one of the largest of any genre and just keeps growing. We live in a world that just a few years ago would have been classified as "Science Fiction." Battlefield Earth doesn't need charity to be a major best-seller, it's just an excellent story that continues to resonate with readers of every stripe.

I understand it was officially released on June 14th. Where can someone purchase a copy?

Amazon, Barnes & Noble, and Audible.com And wherever fine books and audiobooks are sold.