On Thursday, the Supreme Court weighed in with its ruling to uphold President Barack Obama's Affordable Care Act. Friday morning, across key 2012 battleground states, it was print media's turn to analyze the court's decision. The coverage suggests a mixed bag, with editorial boards generally praising the decision and newspaper front pages either playing the news straight or framing it in ways that would likely make the White House uncomfortable.

In Ohio, the court's narrow 5-4 decision was met with uncertainty. How would the ruling impact health care spending? Will it change the ongoing debates in Washington and on the presidential campaign trail? Canton's Repository summed up the feeling with a huge headline dominating its front page: "Fight Not Over Yet." The Cincinnati Enquirer echoed the sentiment with its own above-the-fold headline: "Furor Goes On."

In Raleigh, N.C., the News & Observer followed a similar theme. One front page headline warned, "Health Care Issues Linger Like Bad Cold." The story pointed out that the ruling does nothing to scuttle the "white-hot politics surrounding" the law. The Charlotte Observer reported that the political fight won't just be a national one with its headline, "Despite Ruling, Local Divide Over Health Law Continues."

Several editorial boards in battleground states offered their own take on the Supreme Court's health care decision. The Cleveland Plain Dealer's board suggested it was time to move on from the mandate debate:

What everyone, but especially the law's opponents, need to remember is that the status quo is unacceptable. Americans want coverage that's accessible and affordable. Businesses that pay for their employees' coverage need lower costs, and both they and health care providers need certainty about the rules of the road.

In that light, Obamacare's opponents should stop fighting the mandate and focus on building a workable system. In Ohio, that means Gov. John Kasich and Lt. Gov. Mary Taylor need to move ahead to design a statewide insurance exchange where consumers can shop for the best deals. In Washington, that means the Obama administration should encourage competition and innovation to fight health care inflation.

After two contentious years, the court fight is over. It's time to craft reforms that work.

The Detroit Free Press's board was even more blunt: "don't repeal." The board wrote for this morning's edition:

That should be the mantra for health reform going forward in Washington, now that the U.S. Supreme Court has done away with the legal challenges to the president's landmark law.

The old status quo -- under which health care gobbled an ever growing percentage of the economy while the ranks of the uninsured continued to grow -- just isn't acceptable. It was crushingly expensive. And it was immoral.

The Richmond Times-Dispatch expressed disappointment in the ruling:

The Pittsburgh Post-Gazette argued that the rulings fate is now up to the American people:

The decision gives some 30 million uninsured people hope. It addresses the concerns of those who feared Obamacare was robbing them of freedom by reminding them that Congress certainly does have the constitutional power to levy taxes. It has also helped restore the Supreme Court's damaged reputation as an independent arbiter of the law...

By the time the people next exercise their judgment, Mr. Obama and his fellow Democrats must make the case like never before that this legislation will cut health care costs and not lead to rationing of services or a shortage of doctors. Mitt Romney and the Republicans have to face the fact that the bill is constitutional and come up with an attractive plan that goes beyond just ending it.

All photos from Newseum 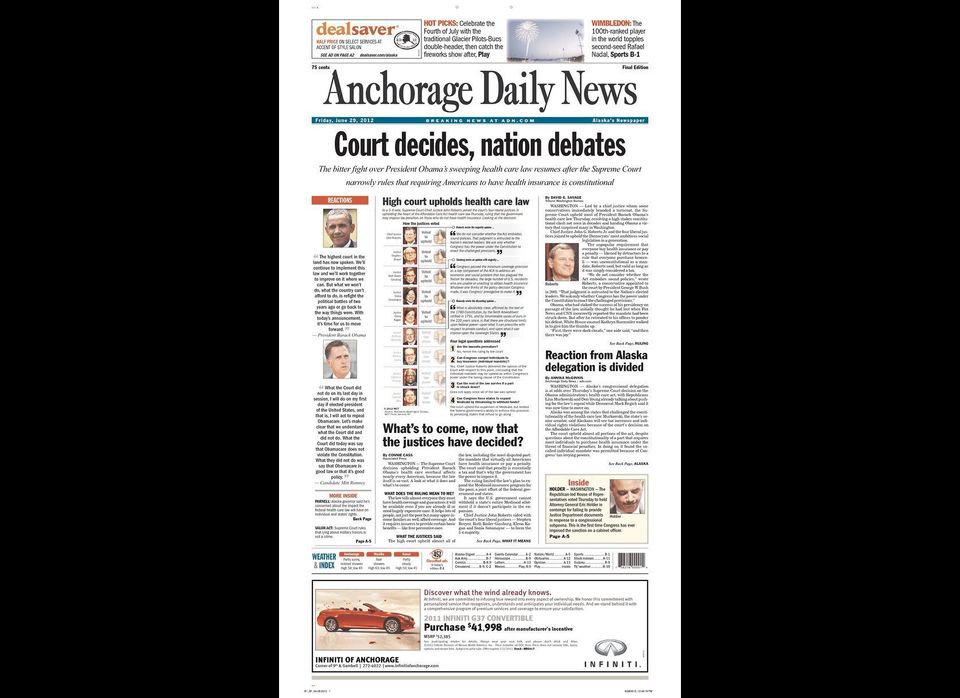