Since bending ears and boggling minds with Mirrored in 2007, Battles has been a Shibboleth of musical taste. The band name people whisper to each other to mean, "Yes, I've seen the light," yet one you would be hard-pressed to find in heavy rotation, or catch drifting through a party. Battles was something you appreciate from afar. Sip, and savor like a scotch--complex and thrilling, but not what you might call a daily drinker. La Di Da Di, out September 18th on Warp, changes that entirely. 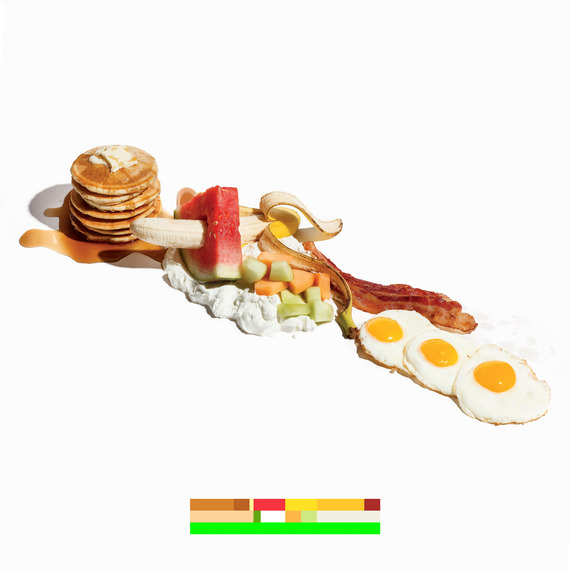 But first the backstory. There are two parts of the Battles saga that have perhaps held the band back. First, their tendency to release an album only every four years or so--a tough pill to swallow for any fan, and one that increasingly threatens to drown bands in the growing glut of music.

Second, that since Mirrored, it's apparently impossible to write about Battles without mentioning Tyondai Braxton.

For the uninitiated, Braxton was the band's chopped and pitched singer or yore whom, in spite of being just another spasmodic instrument in the mix, every interviewer asks the band about about with wet lips and glittering eyes. Because, drama.

To make matters worse, the "without" album, 2011's Gloss Drop, had difficulty delivering against the hype. What Braxton offered more than vocals was a focal point in the frenzy, and without it Gloss Drop disintegrated into rock repetition and reductive parts, like planets spinning without a sun. The moments on the record where guest vocals did emerge saw the band to their most watered-down, reduced to a backing band for famous names.

The new story is that with La Di Da Di, all of that goes away. Battles has emerged from their weird, math cocoon as something, perhaps for the first time, full-fledged. Finely focused, and with a purpose that will put all past comparisons to bed.

Through its dozen tracks, La Di Da Di builds a landscape of instrumental beauty that is bassier, bigger, and more confident; guiding the listener with call-and-response riffs through compositions of more familiar and far weirder things than ever. After the already-released opener, "The Yabba", professional madness ensues with tracks that can only be described as:

"Dot Net" is savory blubber and burbles, sausage squirted into an electric casing.
"FF Bada": bird hiccups and intoxicating elephant farts.
"Non-Violence" makes a little more sense, rallying around some semi-overdue innovation to John Staniers' stoic setup, but when "Dot Com" popcorns in to beg for a melody you could swear there are notes you cannot hear that are holding the song together. 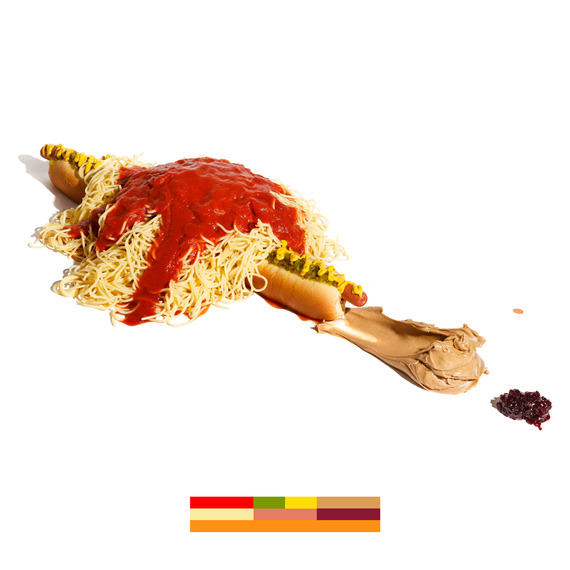 Throughout the album, whenever Battles' style becomes a straightjacket, they shrug it off easily with cooling tracks like "Cacio e Pepe" and "Tricentennial". "Megatouch" brings a smile of haunted camp to the lineup. And the closer, "Luu Le", lets you down in a gentle acid dream, floating on a lotus through some summer night on a planet far away.

And the four tracks not mentioned yet? They're every bit as good as the others.

On every level, La Di Da Di is a beautiful realization of Battles' promise. It is silly, thrilling, dark, insane: benefitting from close listening and but delivering so thoroughly on the surface that it begs regular listens. As if that's not enough, the Lesley Unruh-photographed food sculptures that parallel the sonic portion are meditative, disgusting works of art that thrill all on their own.

After more than a decade playing together, Battles has delivered a 10/10 tour de force. An album that will stand up to the next four years and keep fans warm through the long winter. And one that assures Tyondai Braxton's name will never come up again.