People that are on duty on the Nemtsov Bridge seem like kamikaze to me, they are NOT going to stop guarding the memorial, despite these attacks. 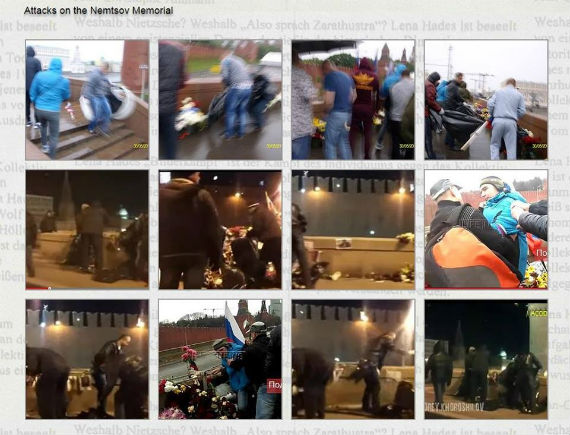 You understand that if such a world-known man was killed so brazenly and with impunity, and the exterior surveillance cameras on the Kremlin wall all suddenly broke down, what can we then expect from the chimeras of the law and justice, if one of the volunteer-guardsmen will get hurt -- the chimeras will get away with it once again... 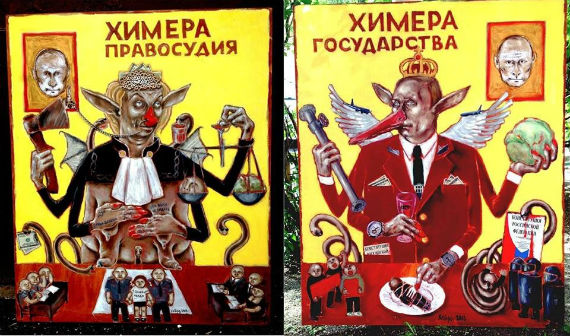 About the volunteers on the Bridge I can say one thing: they are idealists, who believe in the human mind, and the meaning of human existence, and in some higher powers, that will save them while standing in the edge of the abyss... from falling into it...

Volunteering at the Nemtsov Bridge is to stand on the edge of the abyss! For the sake of common sense, the volunteers guard the Nemtsov-Grand Moscvoretsky Bridge. They guard not just the flowers, portraits, poems and placards from vandalism, theft and desecration, but also the small piece of land in asphalt and granite where the common sense prevails in spite of a tsunami of stupidity and obscurantism. 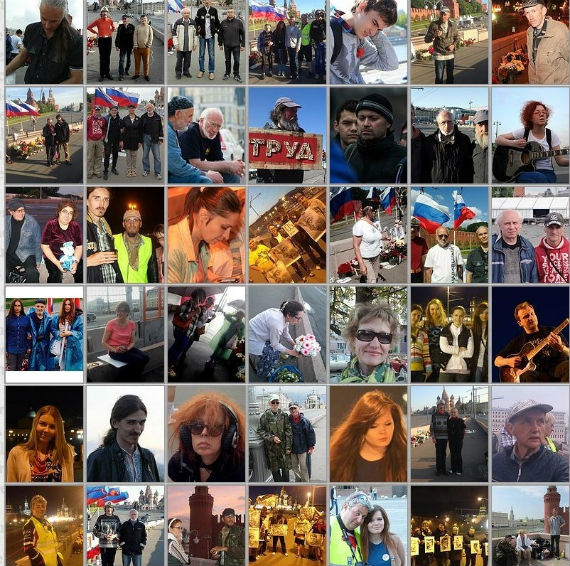 Among them are actors, students, doctors, teachers, engineers, artists, programmers, some of them are already retired, others are younger than 25 years old. They all share one motive: not to allow the ones in power to erase the memory of the murdered politician.

There were numerous attempts to destroy the memorial in past 240 days. There were multiple raids by the members if the SERB radical organisation during which flowers, placards, posters, photographs, candles and baskets of flowers -- brought by supporters and followers of Nemtsov -- were simply dumped into lorries and taken in an unknown direction. This is an ongoing struggle with the Gormost (the city corporation that maintains the bridges). I remember how on one April evening, an employee of Gormost stood on the bridge with a large black bag in which he collected all the flowers brought to the memorial. Once I had to stand and personally rescue the bouquets. It was raining, strong wind was blowing around, and -- as always -- there was a Gormost man with a trash bag... I did not allow the bouquets to lie on the pavement, and so they would not end up in the trash I collected them. The bouquets accumulated into a mountain (because endless crowds of people brought and brought them) -- and suddenly the other volunteers appeared. Gormost employees retreated and we laid out a huge sign "БОРИСЬ!" ("FIGHT!") made of flowers. 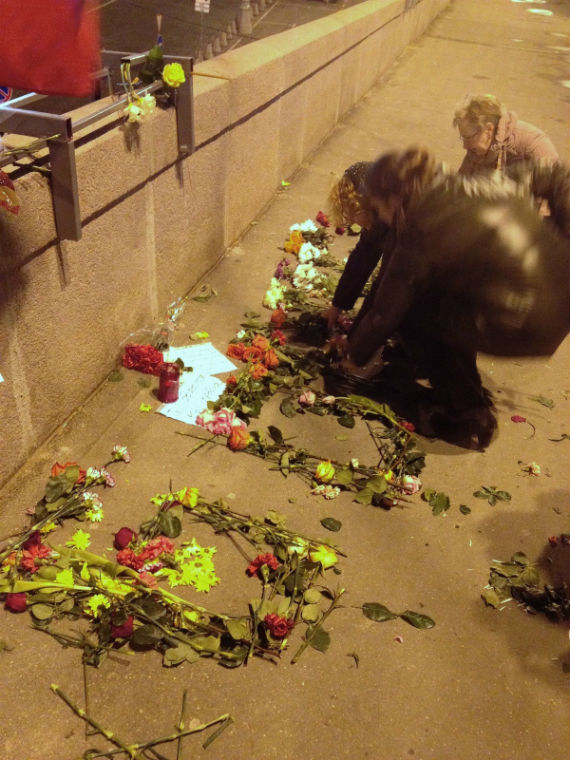 That's what happened during the night duties, when the bridge was guarded by volunteers Igor Gordeev, Pavel Kolesnokov and Liubov Sergeeva. Back then Gormost used to clean the pavement every night using sand blasting machines and chemicals. At midnight as usual, such machine appeared with a team of Gormost employees. Their supervisor told the volunteers that they interfere with cleaning of the bridge from dirt.

After that a group of man in black camouflage came up the stairs towards them. They surrounded Kolesnikov and Gordeev and began to push Sergeeva away from the flowers and portraits, which she bravely defended. In order to somehow suspend the lawlessness, Sergeeva pulled out her camera and started recording, but the brave man in black tripped her up, she fell, the camera instantly fell away from her hands, and the shooting of the offenders was interrupted. She later tried to find her camera in the bridge, but never did! Unfortunately this attack was not suppressed: the memorial was completely destroyed, the bridge was denuded, the flowers and portraits were taken away as ordinary trash.

But the next day the people's memorial was restored. Just like a phoenix it is being reborn again and again.

What awaits the people's memorial in the future? How long will it last? How still and strong will be it's defenders? There are no answers to these questions. Guarding the memorial and the bridge every day for long five months is a very difficult task, because one can not move away from it, not for a minute, not for a second. It's just like standing in the Guard of Honour day and night, and like Shiva, the many handed God, manage to do hundreds of things at once: keep order, change the flower water, answer the questions of the ones passing by, speak to the supporters if Boris Nemtsov, who came to the bridge with flowers, prevent vandalism or demonstrative disrespect to the murder site... Such a long standing and confrontation, think about it, lasts for 240 days already! That is an unprecedented case in the world history! A group of volunteers without any financial support has been guarding Nemtsov's memorial -- in rain, snow, wind, cold, heat, hurricane, in any weather... The volunteers suppress the numerous attacks of the vatnik-patriots, who insult them and accuse of corruption and improbity. These brave people often risk their own health and even lives for the sake of... victory of the reason, for the peaceful future of Russia.