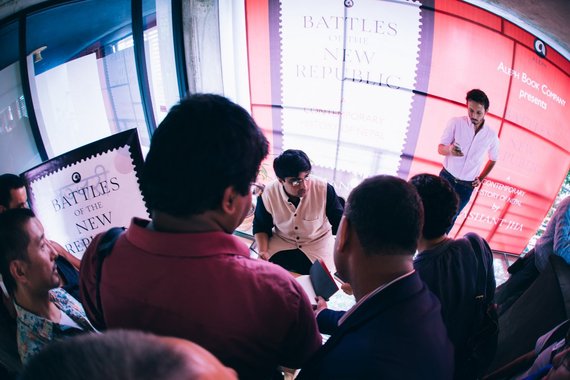 The audience was eager with anticipation at the City Museum on Monday afternoon, waiting for the program to start. By 3:15 pm, every seat was taken and two of the panelists - seasoned journalist C K Lal and newly elected politician Gagan Thapa were ready to start. When former Prime Minister Baburam Bhattarai, the third panelist, was ushered in by security guards, a hush fell, everyone's attention was directed to the front of the room, introductory welcome remarks made and Prashant Jha took over.

Jha, who was a regular columnist at major Kathmandu dailies, rose to fame during the period after the monarchy was overthrown in 2006. His sharp political reportage - some based on travels through semi-rural Nepali towns - and relentless dedication sought to provide clarity to a confused public and to a nation reeling with instability. Jha is known for his people skills. Within a very short time, he was able to gain back-room access to top-level political discussions during the peace process and was privy to information that most Kathmandu journalist didn't have.

Battles of the New Republic is Jha's personal account of Nepal's political transition. "I would like to thank everyone of you for being here today and to many of you whose contributions made this book possible," said Jha, before introducing the panelists. "I was able to learn a lot during that time period. But I also didn't see and hear everything. I have written an honest book, rather than an objective one." 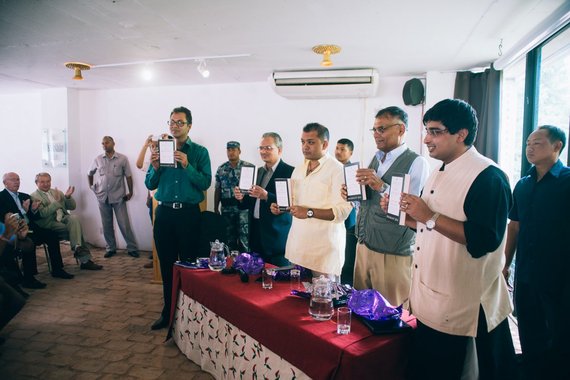 Adhikari: What do you make of your portrayal in the book? Bhattarai: Before answering that question, I want to acknowledge that this book needs a Nepali translation so that it can be accessed by mainstream Nepali society. If you don't read this book, you might miss a very significant portion of Nepal's history. Prashant's descriptions and details are largely accurate. I haven't found this kind of portrayal in any other book.

Adhikari: You have written a few books yourself. But a big part of your life is still unknown to our society - how you lived and what you did during the years preceding the revolution. Do you have plans to write a memoir? Bhattarai: If there is time, I would. But I lost my notes from that time period. Still, I would like to clear a lot of inaccuracies that's part of the public imagination. For example, somebody wrote that the Maoists were trained by India. That is not true. We did not keep a close relationship with India. We first came into conversation after the palace massacre. At that point, we decided to send a letter to all three nations - USA, China and India - stating that we would like to maintain a diplomatic relationship. But that fact was misconstrued by a lot of people.

Adhikari: What about you Gagan? How do you feel about your portrayal in the book? Thapa: I want to state right away that I may be biased when I answer that question because I consider Prashant a very good friend. And now that I am a parliamentarian representing Nepali Congress, I have a responsibility to choose my words wisely. But I will say that Prashant has presented the movement and my role justly. This book could be an exemplary account in terms of the language, descriptive conversations and portrayals of the key players. It will hold a special place in Nepal's history. My one criticism is that it may be inaccurate to say democratic federalism in Nepal started after the Maoist Revolution. I think the momentum for the movement had started a long time ago.

I also agree that India has a lot of influence. They used veto in 1990 and they also used veto in 2006 to remove Gyanendra. One has to learn to live with the neighbor and this is our neighbor from three sides. Now we have to think about ways to make the Nepali society and polities aware of this dynamic.

Lal: This book has a lot of facts, but very little truths. I am afraid that people who are not interested in politics may not be interested to read this very factual account. Truth comes from passion and emotions. Facts have utility but truth is of interest to everyone. Having said that, this is an important book. And Prashant has made India's role and influence very clear. 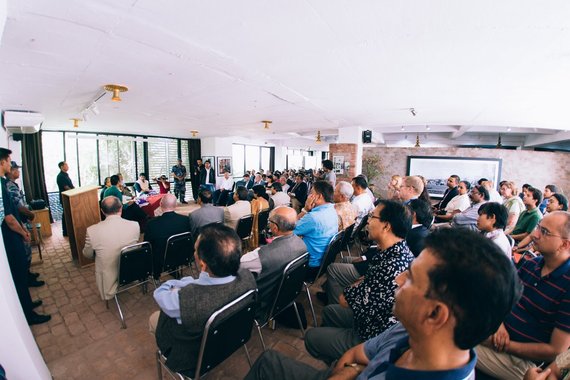 Adhikari: I would like to talk about India's intervention. How have you interacted with Indian representatives? Have they pressurized you in any way? Bhattarai: I want to refer to the chapter titled "Politics of Partial Sovereignty." Can it ever be partial? My understanding is that sovereignty can't be partial. Still, what happened recently in terms of Nepal-India relationship is not new. This dynamic has been there since the time of the Sugauli treaty. No matter how much we Nepalis complain and bicker, this imbalance in our relationship remains. In fact, when I was at Jawaharlal Nehru University, half of my thesis had to do with this imbalanced relationship with India. I still believe that Nepal can't fully develop because of this imbalance. But in realpolitik, one has to maintain a sound relationship with both neighbors and enemies. We believe that maintaining a diplomatic relationship with India will only benefit us.

Adhikari: I now have a question for Prashant. We all know about your incredible access to politicians. Does this kind of access compromise your writing? And how do you do it? I bet the journalists in this room would like to know. Jha: Well, I think I was at the right place at the right time. When I returned from India in 2007, the Madhesh movement happened. At that time, Madhesh wasn't recognized in Kathmandu. Being a Madhesi enabled me to convey the ethos of the movement to mainstream Nepali press. In terms of access, Nepali politicians are very accessible compared to politicians in other countries. As for my access to Indian officials, since I studied in India, I had a network that helped me. If you maintain your integrity and independence, you can win people's trust. I have never asked for any favors from Indians, hence it was easy to gain access.

At that point, I was also writing for an Indian paper, The Hindu, which was willing to provide some space to Nepali politics. Between 2009 -2011, I was very critical of Indian intervention. The extent to which India went in order to isolate the Maoists during that time is unforgivable.

Adhikari: I would now like Gagan to introspect a little bit. Gagan, you grew up in a middle-class Kathmandu family. But you are able to connect with people from outside the valley. You are liked by the young and the old, by the middle class and the working class. Initially you were regarded as a radical, but now people see you as a politician. What do you make of all this? Thapa: When I was at TU, we talked about nothing other than democracy. We would have discussions regarding inflation and petrol prices. But since 2000, I started becoming more aware and conscious of my place in society. When I entered politics, I was able to connect with the people because I acknowledged their problems. So I was labeled a radical. But now, as a politician, my job is to start suggesting solutions. And when you do that, people resent you. I believe that our problems lie in institutions, yet we spend a lot of time talking about personalities.

Audience member: So how does one balance India's positive and negative influence? Lal: I once related a Panchatantra story to Rakesh Sood, who was the Indian ambassador at the time. It's that story about a mouse and a lion and how one day, when the lion is trapped by a hunter, the mouse cuts him loose. My message to Rakesh Sood was: You may be a lion in South Asia but friendship can only happen on the basis of equality. Rakesh Sood didn't take that message well. And I suspect that he put my name on the Embassy blacklist. I haven't been invited to any event since.

Thapa: Well, stop asking for scholarships and favors from India. If we continue that habit, we are asking for micromanagement. My impression is that the new establishment in India is genuinely ready to work with us.

*** Bhattarai: I want to respond to Jha's phrase "Death of a Dream" from the book. I request that you add another postscript because we are working to rewrite the constitution. Our dream has not and will not die. I have learned that every party has to compromise a little bit while writing the constitution. Our mistake last time was that we all stuck to our visions and no one was willing to budge.

Lal: There are two ways to interpret the phrase "Death of a Dream" - either the dreamer has died or has woken up. I think Nepal has woken up from the dream. And the reality looks very different.