Last week, the overlooked morsel of brilliance known as "Battleship" was released on Blu-ray. At this point, I can only assume that you own a copy and sleep with it every night, tucked away under your pillow, hoping against hope that its genius can somehow get digitally transferred to your brain overnight as you sleep. But! Did you know there is a novelization of "Battleship"? (Neither did I until I unexpectedly received it as "the greatest gift ever received" last night.) Written by Peter David -- who is held in high regard when it comes to movie novelizations -- the book adds another level of brilliant ridiculousness to a story that was already over its ridiculous quota. I spent some time reading through the novelization, and picked out the five most awesomely absurd passages. Here are those passages.

Hopper had just enough time to feel something jammed into his back before his body was jolted by electricity. He tried to say I give up but the only thing to come out of his mouth was "Urkh." As he fell, he flipped the burrito to The Girl. It wasn't so much a toss at it was a spasm, but it was enough to send the burrito angling toward her in an arc. She caught it on the fly, but did so more out of reflex than anything else. If she was still hungry, the feeling was very likely forgotten in the wake of the insanity she was witnessing.

Hopper fell to his knees. The cops had his hands pinned behind his back and were busily applying cuffs to them. All right. Old school. Not those stupid twist ties, like I'm a plastic garbage bag. Real-life handcuffs. Makes me proud to be an American.

He managed sufficient breath to get out two words, directed to The Girl: "Bon appetit.

Nagata studied the grid, thinking, seemingly impervious to the prospect of impending doom. "FOXTROT 24," he said at last.

Raikes dialed up the coordinates. "FOXTROT 24," she confirmed.

Two more Harpoons exploded from their tubes. Raikes quickly loaded two more in anticipation of having to use them.

Seconds passed, and Hopper was certain that during that time not a single person exhaled.

Suddenly there was a distant sound of explosion, and if they had been up on deck, they would have seen an abrupt and brilliant burst of light upon the horizon. Ord's voice came screaming over the walkie-talkie, "Holy shit! Hit! Big hit"

Since the dumb-ass monster had been generous enough to stand still so she could draw a bead on it, she felt that thanking it for doing so would only be polite, even though it couldn't hear her.

The alien was just starting to turn the direction of the gun when the projectile punched through its head, in through the already cracked faceplate and out through the back. The now headless alien actually continued to stand there for a moment, its arms out to either side. Then it slumped backwards and tumbled over the railing.

"Just in the Nearly Headless Nick of time," said Raikes, whose deepest darkest secret was that she was a fan of Harry Potter.

He heard a crunch and the sound of something breaking within the armor. The helmet came flying off its head, revealing a butt-ugly face, which Mick promptly made even uglier as he slammed the rock into it. There appeared to be some manner of tubes visible in the top of the armor, and Mick's assault broke some of them, causing what appeared to be salt water to pour all over the place.

An assortment of old salts -- Navy men who were actually more ancient than the ship whose deck they were striding across -- were approaching them. They were grizzled, and they weren't moving particularly quickly. But they walked with their heads held high, distinct pride and -- of all things -- an attitude of certainty that, now, that they'd been called in, everything was going to work out just fine.

'Battleship': 5 Most Awesomely Absurd Passages From The Novelization
&#039;Battleship&#039; Stills 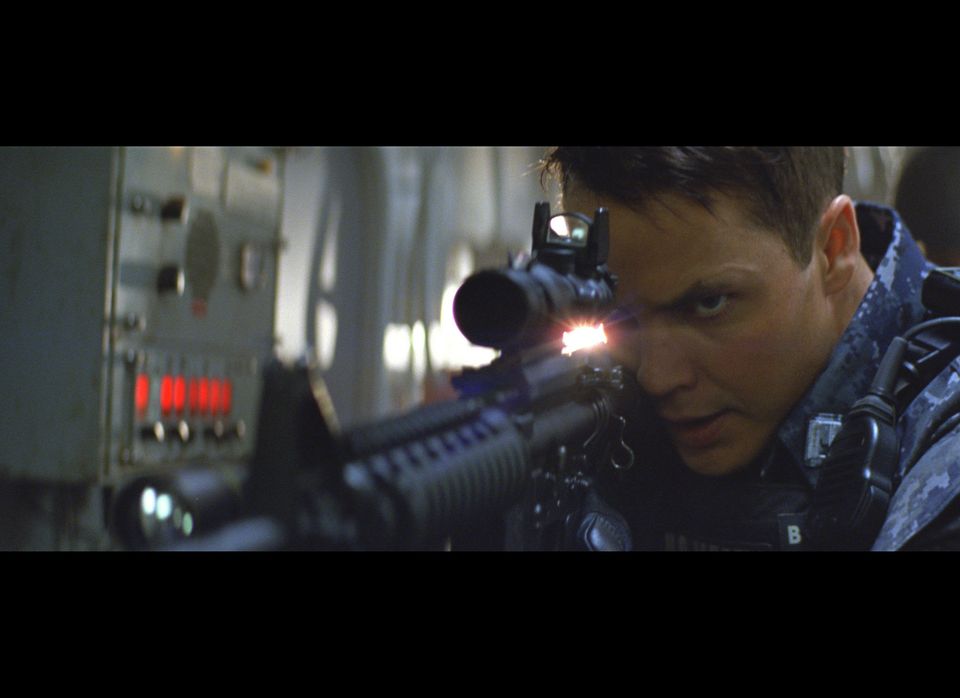