Most readers might remember Judd Winick from his stint as a reality TV star back when that was nothing to hang your head in shame about. He was a cast member and struggling cartoonist on MTV's The Real World: San Francisco back in 1994 and has been rising through the ranks of comics ever since.

With DC Comics relaunching all of their titles, Judd was able to take over two brand new books in the Bat-Universe. The first of which, Batwing, hits shelves this week and we have an exclusive preview below.

Batwing is a brand new character, spawned from Bruce Wayne's desire to franchise the Batman name across the globe, Batwing is Africa's Batman.

There was a modest amount of eye-rolling from the right when a new, black Batman was announced, citing a liberal need for affirmative action and political correctness, but this story seems largely apolitical in that regard.

I had a chance to talk to Winick about it the book. My first question was why Africa and why Batwing:

Africa as a landscape is somewhat untouched in the DC universe in a significant way and we thought Batwing was just the kind of character to deliver these fresh stories. Both as a straight up super-hero story, this is a guy flying around in armor with a big bat insignia on his chest fighting other guys in other crazy outfits, but it's set in Africa which is this highly politicized landscape where we don't really have to come up with super villains. We have men in Africa that call themselves warlords who kidnap children and put guns in their hands and hop them up on meth and have them go kill people. These are the real guys. So we thought that combining the really over the top super-hero elements along with the very established politicized environment of Africa could make for great story telling. And with that I should say this isn't Lion King, we're not gonna have Batwing running around the jungles with animals or things like that. There are jungles and rural areas, but it's not going to be that kind of story.

Are there other political touches to the book?

On what could be considered the more political bent is that Batwing is an AIDS orphan. He lost both his parents to AIDS. Which some folks might call that politics. From where we sit, we're just trying to be true to life in Africa right now. In most of the regions, one-fifth of the population is HIV positive or living with AIDS. And there are somewhere in the neighborhood of 16 million AIDS orphans out there.

It rang kind of true to us especially in the Bat universe. Batman himself and most of the other members of the Bat family come from tragic beginnings. That's sort of the motif. That's sort of the opera of it all. It's not like Batwing was out there doing pre-law for a while, starting his own practice, and then decided "Hey, I'll put on a costume and start beating up bad guys."

We usually don't come from that place. It's usually that they have rather sort of tragic beginnings. The fact that he lost his parents to AIDS and never knew them is one piece of that puzzle.

The level of violence and sort of the timbre of the culture is different than Batman where the worst thing he has to deal with is the Joker or criminals killing a whole bunch of people, but on a sliding scale that isn't as bad as warlords abducting children and putting guns in their hands. Do you see this book as being darker than the Batman books which are already renowned as being the darkest in comics?

Yeah, if you consider that we're coming from a starting place that this is a Batman who lost his parents to AIDS and was a boy soldier. That's square one for us. In the first couple of pages Batwing is talking about the fact that one of the things Batman has to do is instill fear. And Batwing points out that he's not really sure that a man dressed up as a bat is really going to scare the average criminal in Africa. Batman just tells him that "you're just going to have to sell it." And that's the point, it's a different world. I'm treating it like even the fact that he can drop out of the sky and is wearing all this armor, a criminal in Africa who isn't some guy who is gonna rob a liquor store or a bank, has seen and done terrible things. He's not gonna cower back and scream "Ahhhh it's a bat," it's just not gonna happen. Things have to be more frightening. So it's less about him instilling fear into criminals than it is just trying to fight the fight. It's a little bit of a war. That's what Africa is, it still has many many wars going on right now.

As a writer what is the difference between writing this compared to Catwoman, which you are relaunching?

It's apples and Volkswagons. It's an entirely different book. Catwoman lends itself to a lot more humor than this book does. I've got my ears boxed over the years for making some of my super-hero books too funny or too snarky here and there. That isn't the case with Batwing. Does it have levity? Yeah, a little here and there, but it's fairly serious subject matter. Or rather a fairly straight ahead super-hero story in that way. I like quips. I like joking around in that respect. And Catwoman is a criminal. She steals things. There is more of an Ocean's 11 stance on that book. So it's a little bit of dark fun whereas Batwing right from the first issue the stakes are enormously high. And I feel that sort of speaks true to the climate of Africa. It is considered high adventure, it's out there and a lot is happening. It's walloping fun in the sense of the high-end nature that we're detailing.

Here's an exclusive look at some pages from Batwing #1: 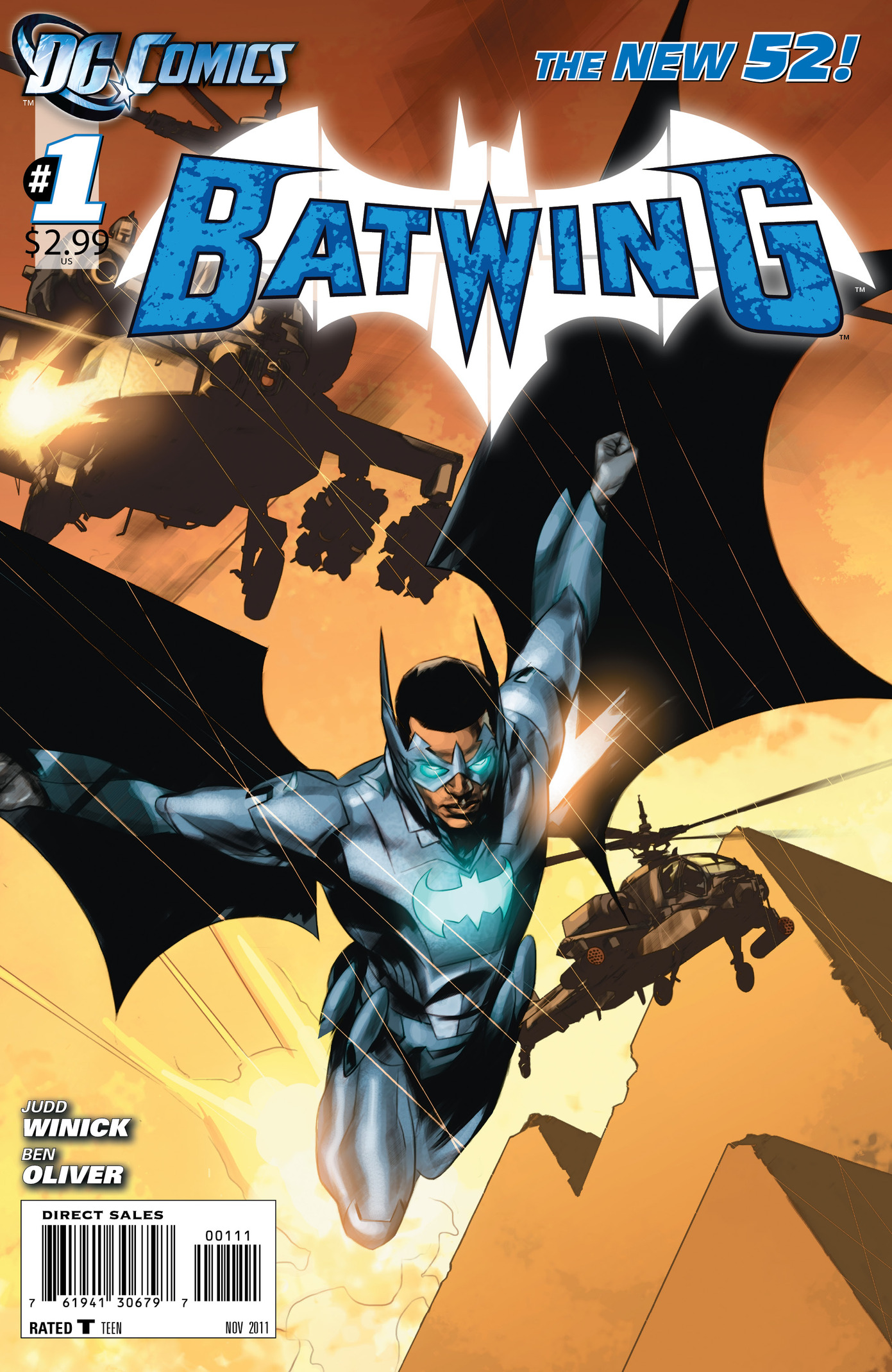 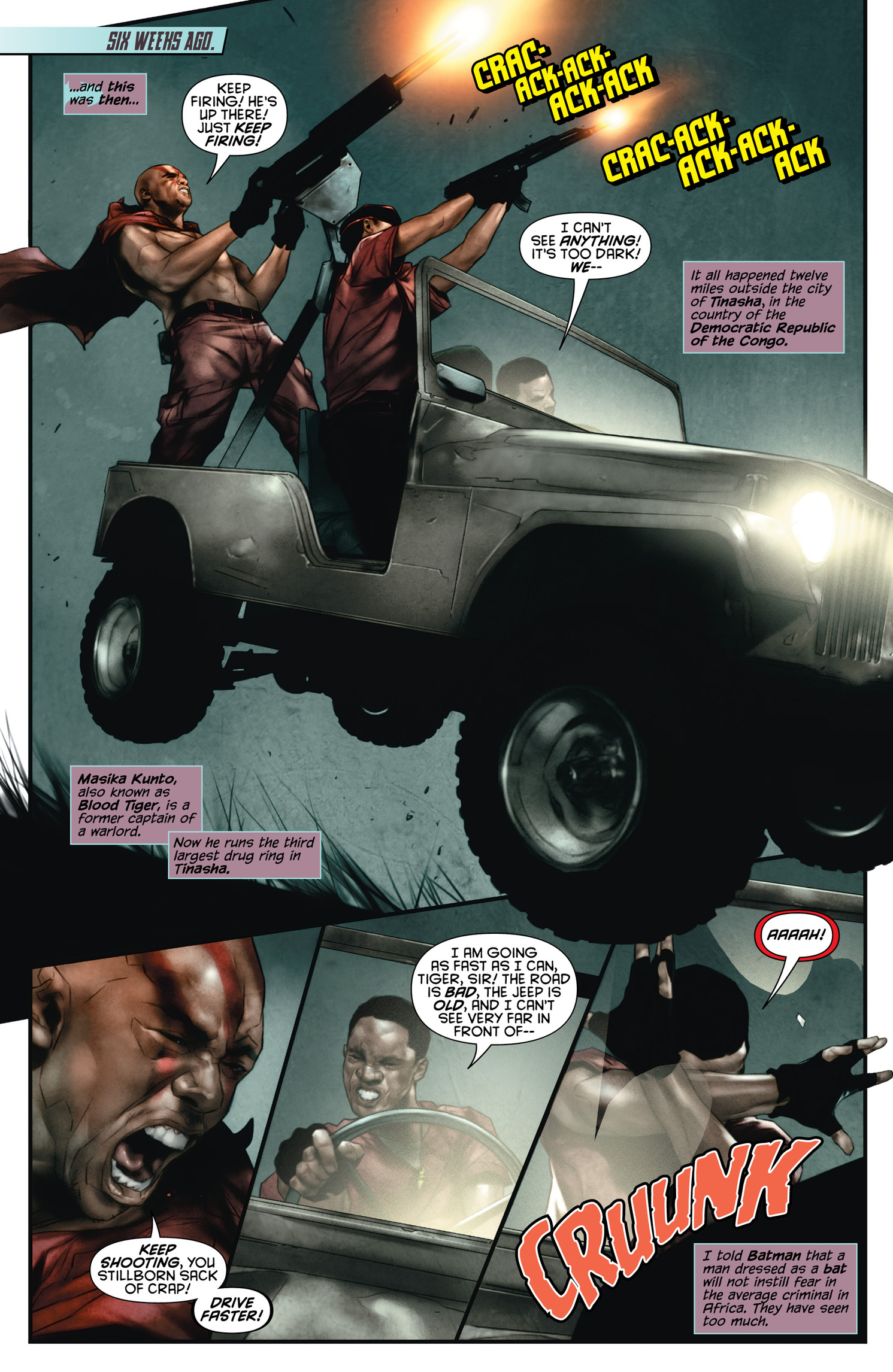 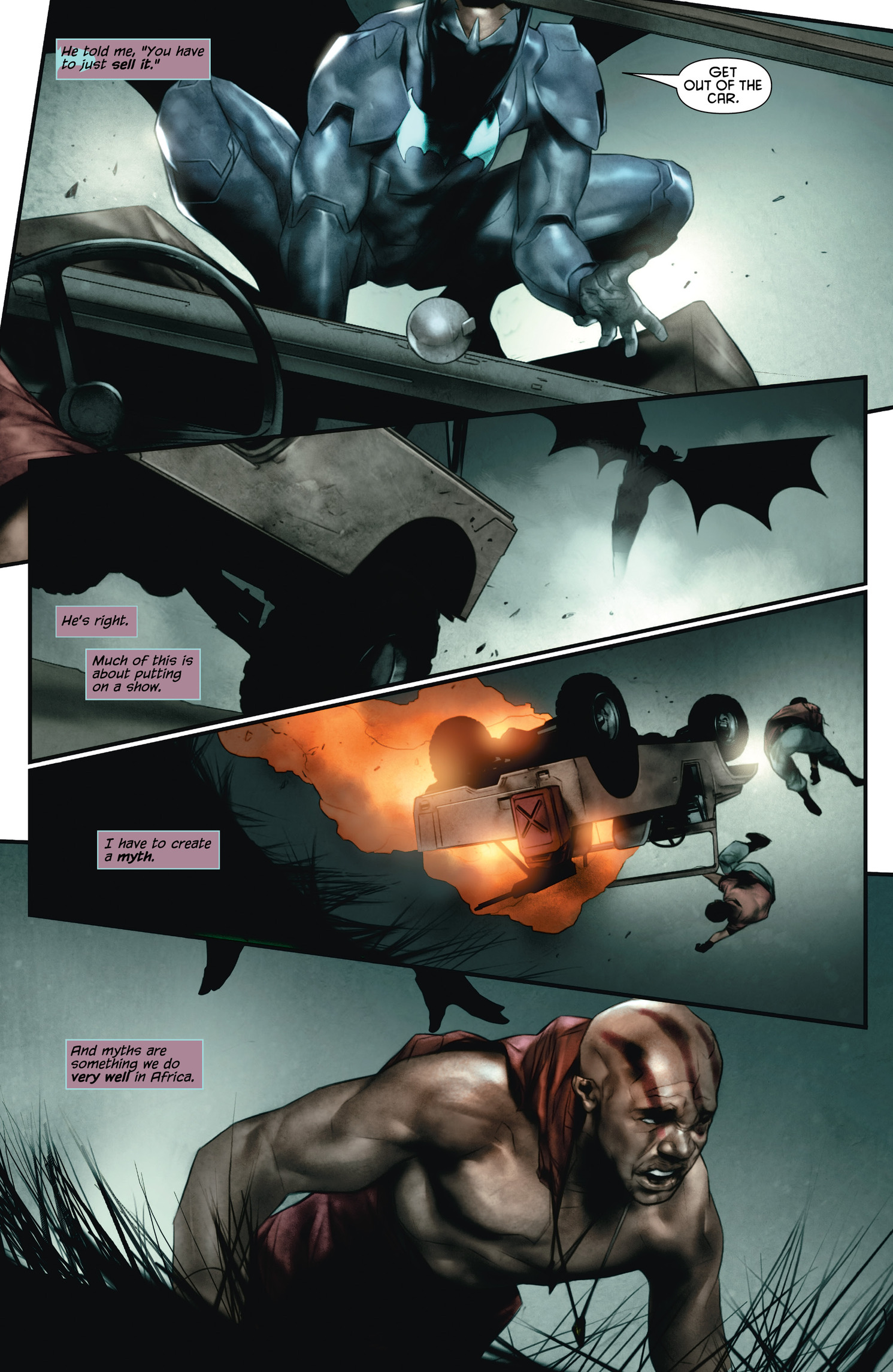 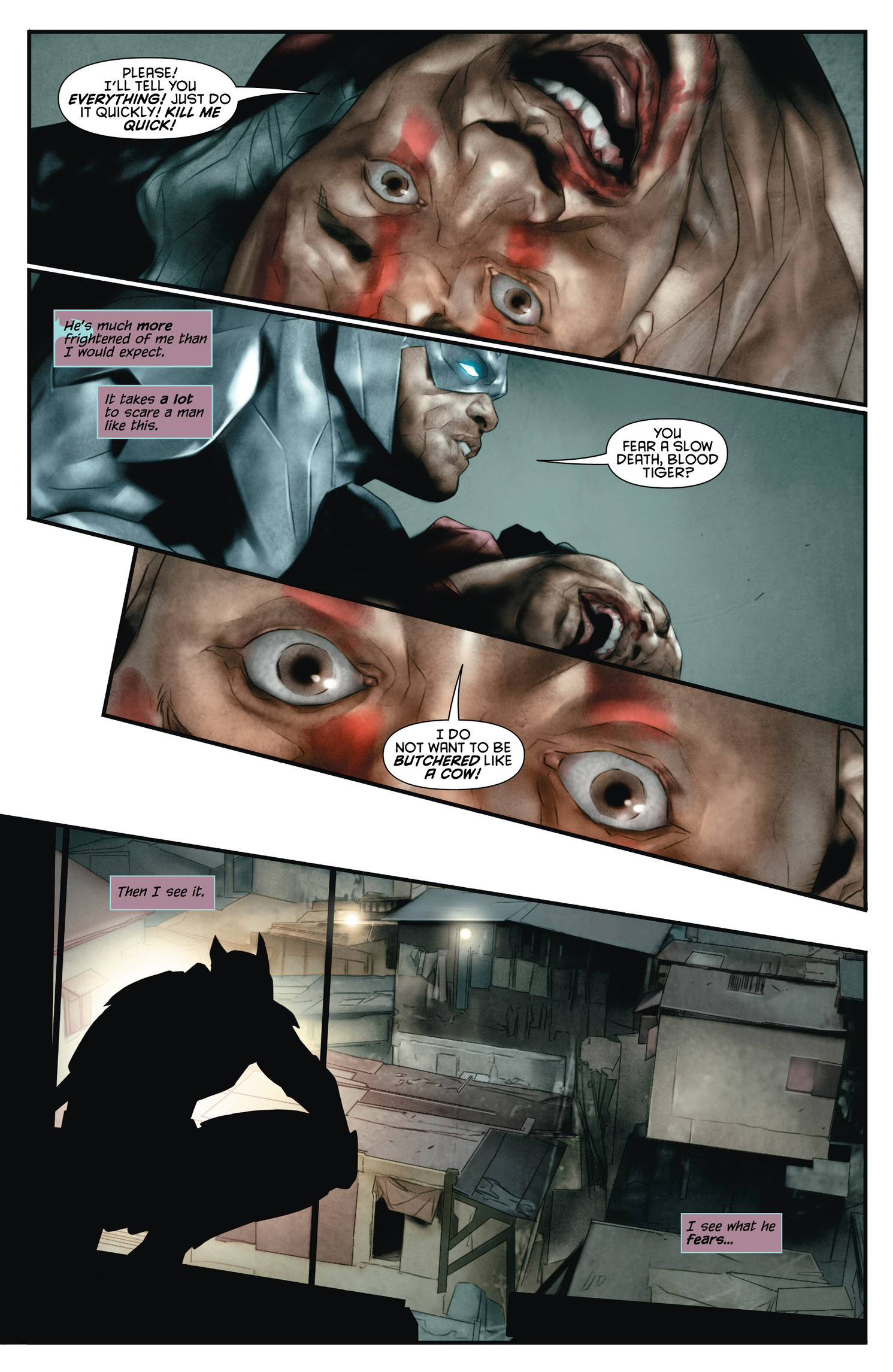 I'm one of those suckers who seems to buy every book with a Bat-logo on it and I was on the fence about this book. After talking to Judd about it though, this shot up to near the top of my list of must read. Doubly so after looking at these gorgeous pages. There's a lot of fertile areas to explore in Africa, it's a big continent. One thing Winick and I talked briefly about was that there would be stories in the Unknown Soldier sort of Africa as well as the Africa of Casablanca. You can read more about that on Big Shiny Robot!

Bryan Young is the editor of Big Shiny Robot! and the author of Lost at the Con.