Artist David Mesguich is deeply proud of his latest work. “It is projects like this which upset the sense of fatality!” he exclaims. His pride stems from the extraordinary nature of his project: instead of a gallery or museum, Mesguich has been working to beautify one of France’s harshest prisons.

Last February, Mesguich worked with prison inmates who were receiving medical and psychological treatment to paint two immense murals against backdrops of gray cement and barbed wire. His goal, he says, was, “to show the prisoners... that beautiful and positive things can still come from inside them.” 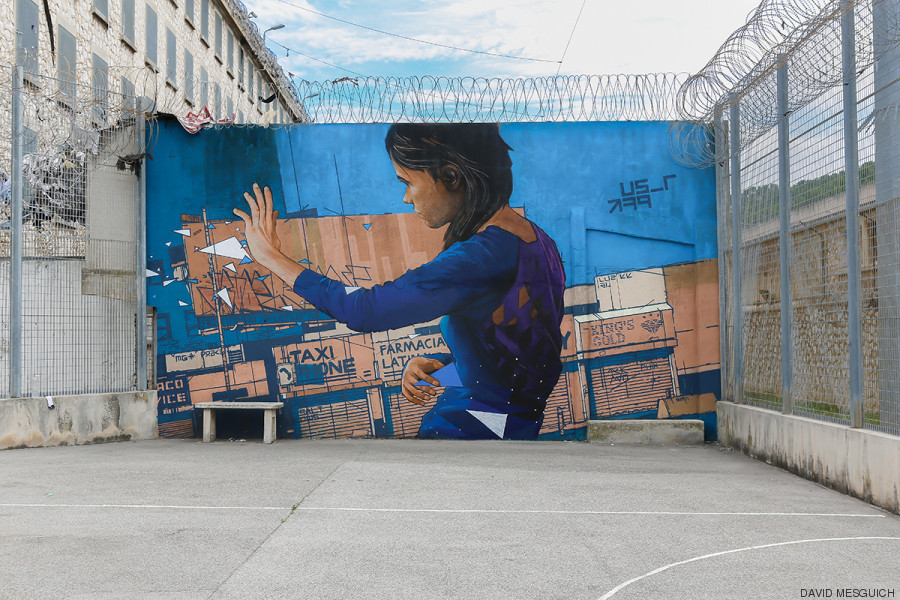 Marseilles’ Baumettes prison is one of the most notorious in France. Earlier this year a scandal erupted when inmates posted images of themselves on Facebook posing with money, drugs and weapons. The proliferation of forbidden goods and weapons among prisoners highlighted Baumettes’ critical shortage of staffers.

For Mesguich, working in this prison was a deeply personal project. “I encountered the prison world very early on, due to a rough upbringing,” he says. “As a young boy, I visited a number of prisons, and, as an adolescent, I knew of Baumettes, where my father was incarcerated. So, since childhood, I have reflected on isolation and separation.”

This reflection led him to the idea of a “monumental” project: two murals, each over six-feet high, painted by six prisoners in the complicated conditions that accompany incarceration. 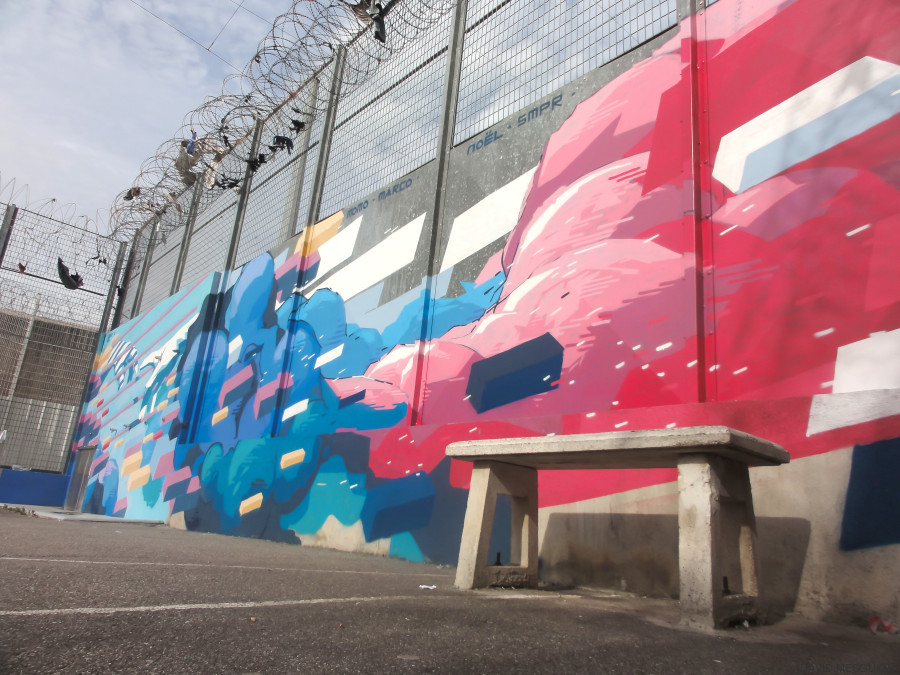 “It was not simple to put this in place, because the constraints of the prison environment determine the way the work can happen,” Mesguich explained. “For example, I did not have the right to use a ladder to reach the top of the mural when the prisoners and the nurses were with me. And time for work on the mural was limited to two hours for the prisoners. So I came back during off-hours, between noon and two, and continued alone at the site with the ladder. The rest of the time, I waited in a room while the time passed.”

Working in a prison was a deep calling for Mesguich, who has frequently taken his artwork to the streets. But his work also poses the question of the real benefit this type of project might have for inmates.

Sociologist Jean Bérard, a professor at the University of Montreal, has worked on the history of French prison reform. According to him, “It is difficult to respond on behalf of [the prisoners] about what such an initiative can bring to them. But the limits of such initiatives are known: they involve a minority of prisoners, and cannot radically transform the way an institution of imprisonment operates.”

For Didier Fassin, sociologist and author of The Shadow Of The World: An Anthropology Of The Penal Condition, the initiative is compelling -- although difficult to assess without commentary from the inmates.

“It transforms the prison space, and brightens it, while emphasizing by contrast the ugly and oppressive character of the metal gates, the barbed wire, and the walls,” he says. “This being the case, the question is more general, as is the case with cities. Making murals in a city does not change its reality.”

But what is essential for Mesguich is the fact that “these creations bring humanity to a place where it is lacking.” He did not wish for the inmates to serve as the manpower for the realization of his project. What he wanted was for them to participate at his side in the creation of a shared work. And so the murals bear his signature, but also those of the prisoners who worked on them: Marco, Noël, Momo, Jeoffrey and Michel.

This article was originally posted on HuffPost France and translated into English. It was adapted for an American audience.