In November, 1939, in East Calais, Vermont, two collectors recorded a rare ballad called "The Frozen Limb," sung by a lumberjack and sawyer named Elmer George. The collectors were Helen Hartness Flanders, the wife of U.S. Senator Ralph Flanders, and Alan Lomax, a Library of Congress folklorist. In sprightly, amusing verses, George sang of a young man named Leurin, who visits his girlfriend Mary complaining of a "frozen limb." She allows him to melt the appendage in her "warm bath," prompting him to explain:

This warm bath of Mary, so soft and so hairy,

How eager, how tranquil this fair maid she lay,

It had not been in it much over a minute

Before all the stiffness had vanished away.

(If you're worried about Leurin's staying power or Mary's pleasure, don't fret; Mary "freezes" and "melts" his limb over and over again until morning!)

Helen Hartness Flanders and Elmer George at the Library of Congress, February 1948.

The Library indexed the song, and a Greek letter delta, resembling a small triangle, was drawn on the catalog card. This obscure symbol, for reasons nobody remembers, was Library code for a bawdy song. 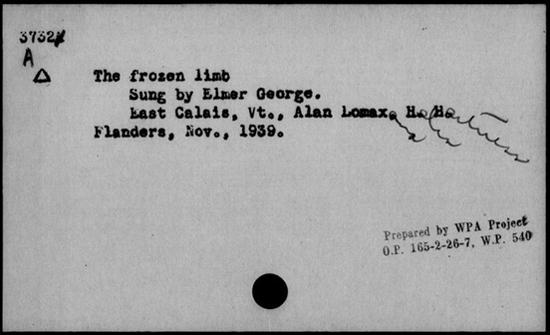 The catalog card for "The Frozen Limb." Note the Delta, to the left of the title.

Bawdy songs deal with those aspects of life we think of as "dirty." They especially concern what the Russian literature scholar Mikhail Bakhtin called the "bodily lower stratum": asses and genitals. A song is bawdy if it mentions anything we do with those body parts, including sex (alone or with others), urination, defecation, farting... or even getting your pudendum pinched by a crustacean. There are hundreds of such songs, in folk, literary and popular traditions alike.

How did Bawdy songs originate? Nobody knows. Most cultures have them. In English, dirty ditties go all the way back to the earliest recorded Anglo-Saxon poetry, especially the so-called "Riddle-Songs." (Here's a single example.) The origins of individual bawdy songs are diverse; some are ancient folk ballads, but others started out as parodies of popular poems by Rudyard Kipling and Robert W. Service. Still others were actually written by famous authors; Robert Burns was fond of writing bawdy songs, and you can find elements of the bawdy song in Shakespeare, Chaucer, and other classic poets. Vaudeville, music halls, Tin Pan Alley and hokum blues, too, contributed many items that are still sung today.

Who sings such songs? Just about everybody -- but certain groups more than others. Historically, bawdy songs have been noted among single-sex groupings of men: sailors, soldiers, students, prisoners and lumberjacks (like Elmer George). More recently, sports teams have been fertile ground; in Britain, "rugby songs" and "bawdy songs" are practically synonymous. Lately, scholars have noticed that single-sex groupings of women, in such contexts as textile mills and girls' schools, also had dirty songs -- a point often missed by the mostly male collectors of the past. 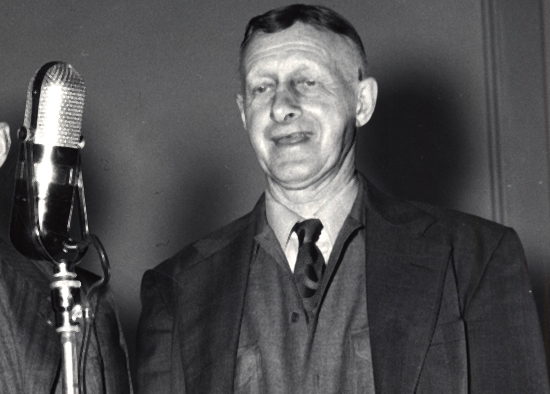 Elmer George prepares to sing at the Library of Congress, February 27, 1948

Bawdy songs come in several varieties. In "tease songs," also known on the renaissance faire circuit as "clean songs," the meter and rhyme-scheme convince you you're about to hear something dirty... but then you don't. "There was a young sailor who looked through the glass," one of these begins, "and he spied a fair mermaid with scales on her... island." Kids learn this kind of misdirection early; "Miss Lucy," the popular schoolyard rhyme, is a tease song: "Behind the refrigerator, there is a piece of glass/ Miss Lucy sat upon it and it went right up her ask me no more questions..." While not actually dirty, such songs do stretch the bonds of propriety. For kids, they test the limits of what can be said in front of adults, and challenge the maturity of other kids: how many of the double meanings do you get? For adults, they inject some naughtiness into otherwise proper settings -- a situation which (who knows?) might lead to actual teasing. In all cases, tease songs force us to negotiate not only how much smut we understand, but how much we admit understanding, and to whom.

Other songs are less subtle. Scatological songs dealing with urine and feces are common. In one of our oldest and most widely distributed bawdy ballads, a man buys a live crab for dinner and stores it in the chamberpot overnight. His wife gets up to pee, and the crab grabs her genitals. Her husband tries to help, but the crab grabs his nose with its other claw. The climax comes when the wife attempts to blow the crab off with a fart:

Well, she heaved and she ho'd, and she come a little bit,
And she filled John Henry's face full of shit.

Some are simple ballads about cowboys, like the classic "Blinded by Turds." Others are downright epic; in 1781, writer James Tytler, stung by a bad review, composed a satire about the critic, whom he named "Alexander Tumbleturd." The song, entitled "The Farto-Turdoniad: A Ballad," is 20 quatrains filled with flatulence and feces. (It's available in Secret Songs of Silence, reprinted in this book.)

My old mentor in folklore, Kenny Goldstein, used to comment that no matter how much sex or shit they had in them, songs weren't truly offensive unless they were violent. Indeed, a small minority of songs combine sex with rape or other ugly violence. One well-known example is the blues ballad "Stagger Lee," which in some versions features the protagonist committing murder and immediately raping the victim's mother; in other versions, he goes to hell and rapes the Devil and the Devil's wife. There are many songs along the same lines.

Where can you find bawdy songs? There are lots of books and recordings. The classic American text is Ed Cray's The Erotic Muse. Many older books and manuscripts, such as Robert Burns's Merry Muses of Caledonia, Thomas D'Urfey's Wit and Mirth, and Robert W. Gordon's Library of Congress "Inferno Collection," are available online. As for recordings, the classic North American performers were Ed McCurdy, who recorded the "Dalliance" series, and Oscar Brand, who has recorded more than ten albums of bawdy folksongs. English folklorist A.L. Lloyd liked bawdy songs, and organized an album of British bawdry. Scottish recordings include various takes on Burns's Merry Muses. Of course, you can come to the Folk Archive at the Library of Congress, now known as the American Folklife Center, and listen to field recordings of Elmer George (or even Burl Ives!)

Finally, for live bawdry you can come to the Annapolis Maritime Museum on February 2 for this concert, at which I and three musical friends will sing a selection of smutty ballads, including "The Frozen Limb" and many of the others I've discussed here. We're even thinking of writing some on current events. So come and say hi--we promise not to fling poo!