SAN FRANCISCO -- Close your eyes and think about poverty in America. What does it look like? What space does it occupy? The picture is probably something like this: racial minorities living in crowded inner city slums.

That vision may have once been largely accurate. But now, in a post-recession world buffeted by persistently high unemployment and a housing market yet to regain its footing, poverty has taken a profoundly a different shape. In places like the San Francisco Bay Area, it's been moving from areas surrounding the high-rises of city centers into the formerly empty spaces on their outskirts.

A DIFFERENT KIND OF HOMELESSNESS

A recent study by the Federal Reserve Bank of San Francisco found that, over the past decade, poverty in the Bay Area has shifted out of the cities and into the suburbs. From 2005 to 2009, the percentage of people living in poverty in the suburbs grew by 16 percent, compared with a 7 percent increase in urban areas.

This migration of many of society's neediest has been an issue for years. Yet a new trend -- an upward spike in real estate prices in the area between San Francisco's tech-fueled economic success story and the economically depressed towns of the California's San Joaquin Valley -- threatens to push the phenomenon into overdrive.

"We're seeing a different kind of homelessness," said Capt. Michael Paugh, who has run the Salvation Army in the central California city of Modesto for about a year. "There's fewer chronic homeless and more people just lost their jobs and couldn’t keep up on their home payments."

The Salvation Army has been in Modesto since 1890, providing hot meals, emergency shelter, job training and free child care for people in need. Rarely have those services been in higher demand, said Paugh.

"During the summer, there are whole entire families coming in for a meal. With school out, these are the only hot meals these kids are getting," Paugh explained. "It’s been an eye-opener to me. When you think of the homeless, you think of people that--for whatever reason--can't or don't want to work. But homelessness here is seniors, veterans, people living on a small amount per month and have to chose between food and shelter. It's good people who just lost their jobs."

Modesto is unquestionably full of good people who have lost their jobs. The unemployment rate in the region is 15.7 percent, down from a mind-boggling 17.4 percent earlier this year. That's not counting the chronic underemployment of people who do have jobs, and therefore aren't counted in the statistics, but aren't able to book enough hours to make ends meet.

In a recent Forbes list of the most "miserable" cities in America, Modesto ranked fourth. Neighboring Merced and Stockton were third and first, respectively.

"There are certain subdivisions in Modesto where one out of every two or three houses are in foreclosure," said Ruben Villalobos, an attorney and Modesto school board member.

THE BUBBLE AND THE WAVE

Many of the area's problems can be traced to the collapse of the housing bubble. During much of the 2000s, scores of Bay Area residents took advantage of cheap, sub-prime financing and bought homes in the San Joaquin Valley. Housing prices shot through the roof and the construction industry boomed.

When the bubble popped, home values plummeted and new home construction, a driving force of the region's economy, slowed to a crawl. A sea of wealth quickly evaporated.

It wasn't just the lure of big houses for low prices that drew many to the outer rings of the Bay Area. Some people could no longer afford the growing cost of living.

"In [East Bay cities like] Oakland and Richmond, the most recent census saw the African American population there decreasing by about 25 percent due to people in those communities being priced out of the market," said Gloria Bruce, deputy director of East Bay Housing Organizations. "Minority groups like African Americans are often the most vulnerable to being pushed out of their homes when prices rise."

If the housing bubble, and its subsequent collapse, left many of the most vulnerable on the geographic edges of the Bay Area, the shape of the local recovery will likely have the same effect.

"Think of the housing bubble like a wave," said Eli Davidson of the real estate firm Marcus & Millichap. "Depressing home prices in Stockton and Modesto, then coming through the East Bay and the finally making its way into San Francisco. As it recedes, it's going to see increases in San Francisco first and then the East Bay and finally make its way back into the Central Valley."

While that wave has yet to wash all the way back to the San Joaquin Valley, the resurgence of the housing market in the Bay Area's urban core is already well at hand.

San Francisco has arguably the strongest housing market in the country. Rents are the priciest of any major city. The home sale prices aren't just the highest in the nation; they're increasing faster than anywhere else. Funding cuts to the city's affordable housing programs have increasingly made San Francisco unaffordable to people on the lower rungs of the economic ladder.

The city's high cost of living has long pushed residents, especially families, into East Bay cities like Berkeley and Oakland. However, over the past six months, home prices in some portions of the East Bay have also soared. Demand continues to rise sharply as employees of the surging, social media-fueled economies of San Francisco and Silicon Valley search for affordable housing.

The supply of new East Bay housing units, on the other hand, is still being constrained by the recession. Since it can take up to a decade to get from Point A ("Let's build some houses!") to Point B ("Here are the keys!"), there aren't a lot of new residential properties opening.

This mismatch between between supply and demand has the potential to further exacerbate the new trend of poverty moving to the outskirts while people with money remain in urban cores. And its effects aren't difficult to predict.

"I can see people being forced further and further out from the immediate Bay Area and moving into the Central Valley," said Maeve Elise Brown, executive director of Housing and Economic Rights Advocates.

LIFE ON THE MARGINS

Far-flung suburbs lack the services regularly utilized by the working poor. There aren't as many housing shelters, soup kitchens or job training centers as in cities. Public transportation infrastructure isn't as developed: Modesto has a solid bus system that hooks into the Bay Area's larger public transportation grid, but access can be spotty and, in some areas, nonexistent.

Paugh explained that emergency shelters in Modesto offer space for less than a dozen families, woefully inadequate for a region where some 20,000 individuals have undergone foreclosures.

The lack of strong city governments hurts the situation further. A recent article by California Watch found that areas like Modesto are spotted with unincorporated zones that have little access to government services.

"It's like people are living in colonies of the United States," Miguel Donoso, a longtime Latino community advocate in Stanislaus County, told California Watch. "Living in a Third World country, that's close to what you see here today."

Moreover, the collapse of the housing bubble and the drop in the tax base has made maintaining governmental services more difficult.

Nearby Stockton, which recently became the largest American city to ever file for bankruptcy, was forced to lay off 40 percent of its government workforce.

Resources at the state level has also decreased precipitously. "We're only receiving 60 cents on the dollar from what we're supposed to getting from the state," Villalobos said, noting that school dropout rates have increased not only in his community but across the board. "Without that funding, students are more likely to slip through the cracks."

Villalobos was also quick to point out that while much as the effects of poverty's suburbanization are economic, there's also a devastating social aspect. Housing instability has made it more difficult for individuals to cultivate roots.

"Modesto is a different place now," he explained. "Ten years ago, if you went to the grocery store, you'd run into people you know. That's not as true anymore. We seem to be a far more transient community."

Check out these aerial photos of California's Central Valley region: 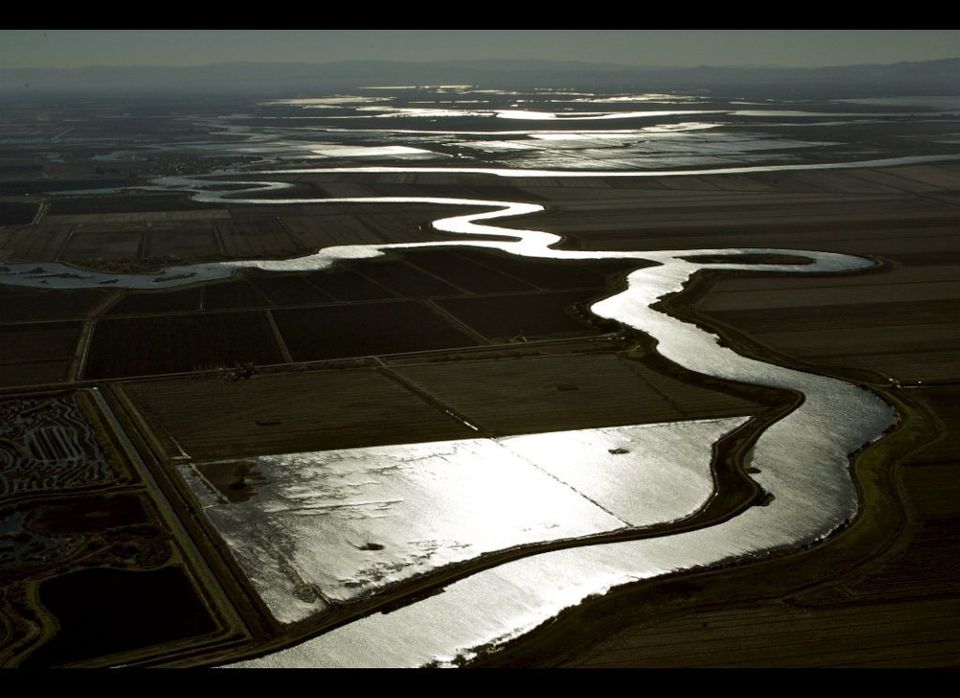