An extremely elusive creature called a bay cat has been photographed in stunning detail in its native Borneo in Southeast Asia.

The new image, which was captured by a photographer working with the wildcat conservation organization Panthera, is one of the first high-resolution images taken of the enigmatic species. Previously, grainy camera-trap images were the main evidence of the cat's existence. 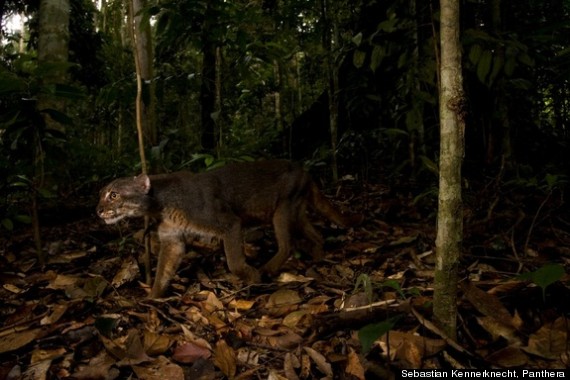 The bay cat, or Pardofelis badia, is a mysterious little wildcat that lives only on the island of Borneo, which includes the countries of Malaysia, Brunei and Indonesia. The diminutive hunters are smaller than the average house cat and have either ruddy chestnut or grayish coats. Their nocturnal nature and secretive demeanors, combined with a low population density, make sightings of the cats incredibly rare. Almost nothing is known about what they eat or how they reproduce. [Video: Cameras Spot Rare Bay Cats in Borneo]

Logging has threatened some of these cats' tropical forest habitats, and the creature is now listed as endangered by the International Union for Conservation of Nature. In the past, the elusive cats were only documented in poor-resolution camera-trap images first captured in 1998. In November 2013, another research team captured several camera-trap images of the cats, along with Sunda clouded leopards and marbled cats.

To find out more about the species, photographer Sebastian Kennerknecht and Andrew Hearn, a researcher at Oxford University's Wildlife Conservation Research Unit, went out into the rainforests of Borneo on the hunt for the bay cat. The team took two trips but managed to get just one photo of the cat.

"During the first trip, we were able to get pictures of a marbled cat and Sunda clouded leopards, but the bay cat proved elusive," Kennerknecht said in an email. "Only on the second trip did we get this single picture. It is of a grey phased male that Andrew has gotten on camera before." [See Images of the Borneo Bay Cat]

To find the cat, the team chose spots to place customized digital SLR camera traps where Hearn had sighted bay cats before, Kennerknecht said. The cameras shoot when an animal crosses an infrared sensor.

The image was captured in the unlogged lowland rainforests of Malaysian Borneo.