San Francisco's iconic Bay Bridge recently turned 75, but few in the City By The Bay -- and beyond -- would have fathomed that it would be nabbing a birthday present of unprecedented proportions.

Enter artist Leo Villareal. Dubbed the "Maestro of Light," Villareal has been commissioned to install one of the country's most dynamic and compelling art projects -- right on the western span of the bridge. The ambitious project is called The Bay Lights, and it comes to glorious life March 5 and will be on display for two years.

It's destined to become the most inspiring thing to see in 2013. 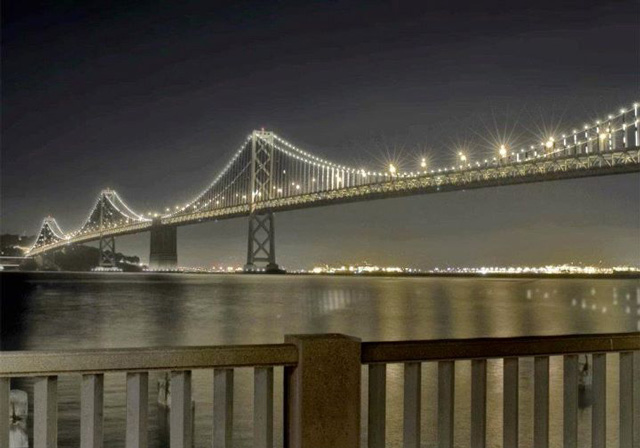 But take note of the intricacy of how all of this is unfolding. The Bay Lights will include 25,000 individually addressable LED lights programmed by Villareal. (Yes, you read that correctly -- 25,000.) The result promises to offer a vivid fine arts experience, one that spans 1.5 miles and, at its highest point, climbs 500 feet up the tallest points of the bridge. The light patterns will move up and down and east and west in unique, unrepeatable patterns. Here, Villareal, who's generated buzz on a number of international projects -- from Washington D.C. and Madrid to San Jose, Calif. and Overland, Kan. -- will orchestrate "complex, rhythmic artwork composed exclusively of these points of light."

"The man is brilliant and he's soulful and very smart," Ben Davis, founder of San Francisco's über hip and positively cool ideas factory, Words, Ideas Pictures, told me. Davis was somewhat of the catalyst for the project. He found Villareal's work compelling -- he also thought the Bay Bridge could make for a wonderful canvas for Villareal's creative genius. When Davis, whose company has initiated a number of forward-thinking projects in the Bay Area, approached Villareal, something clicked.

What I really like about Leo's work and the concept of The Bay Lights, is that I see this work achieving this sublime trifecta: We are programmed, as human beings, to sort of sit around the fire pit and admire the 'night in the sky,' or in the absence of other light, we've been drawn to the night sky. There's something about that that is inspiring to us. Suddenly, we loose ourselves in the fire, and we find ourselves there, and having this connection with those around us who have gathered around this thing. So, we are very moth-like as human beings. So that's cool

He's quick to note that, in this case, scale matters, too.

"There's this notion called the American Technological Sublime -- that we stand shoulder to shoulder, say, next to the Grand Canyon and you may not even know who's next to you, and you look over to them, just go, 'Wow,'" he goes on. "Your differences melt away. So, when you are by The Bay Bridge, right by the Embarcadero, there are those moments of just the sublime... you turn to look at this stranger next to you and you go, 'Wow... look at this thing. Can you feel the awe?'"

It helps, too, that Villareal's work is nothing short of sublime.

"It's not text. It's not images," Davis says of the artist's creations.

It's algorithms and the way my brain interprets it, is that we think we see patterns -- survival mechanisms kick in and our left brain moves in and goes: "I must recognize this pattern because my entire existence forever has always been based on recognition for survival." So we move to a "Fight' space -- "Whoa, I am going to solve this. I am going to understand what is happening here."

But you are not going win that fight with Leo's work. Eventually, you are going to succumb to the right brain; you are just going to be with it. You are going to loose the battle and your right side of the brain is going to go into the space of, "What am I feeling?" The same space you would move into when you are in front of that fire, with people gathered around you. And you go ... into the work, through the work, and you find yourself. Eventually, you connect to those people around you.

Villareal, a longtime artist who began working with light after attending Burning Man in the 1990s, told me that when he was first approached about the project, he felt excitement stirring within.

"I thought it would be amazing to do this," he says. "As we started doing the simulations, we began to realize that, yes, maybe this could really happen. People from CalTrans and other agencies were excited about it. It's been an incredible process of winning people over. I feel as if we are all doing this together -- it's way beyond what any single artist can do."

But did he fight any doubt that he and his posse could accomplish such a complex undertaking?

As for the potential impact, the magnum opus is seven times the scale of the Eiffel Tower's 100th Anniversary lighting. It will shine from dusk to midnight for two years -- projected impact hovers north of 50 million people in the Bay Area either visiting it or seeing it online or some other portal. There is also a potential of billions more people beyond The Bay Area seeing it in the media and online. Modest estimates note that $97 million will be added to the local economy.

Bottom line: In an era where watered down entertainment -- social media, reality TV and the like -- is marketed as the threads that connect us all, or, are even considered "art," The Bay Lights stands as one of the most groundbreaking, significant works of art to come alive in some time; a curious creative beast that may have the ability to, as Davis notes, illuminate the "dark night" and serve as a wonderful reminder of what art can do for a city, its people and the culture.

There's more: take a look at my recent excursion onto The Bay Bridge, where crewmen where installing lights on cables for The Bay Lights. (And log onto thebaylights.org--you can actually purchase a light for somebody.)

The Bay Lights ... Art in the Making