Rustin died in 1987 at age 75 after decades as an activist and organizer on issues including peace, racial equality, labor rights and gay rights. He will be remembered for support for LGBT rights during the National LGBT 50th Anniversary Celebration Thursday to Sunday (July 2-5) in Philadelphia. The four-day event recalls gay rights activists who demonstrated for equal rights at Independence Hall on the Fourth of July from 1965 to 1969.

“In that era, anti-gay was so normal in society,” said John D’Emilio, author of “Lost Prophet: The Life and Times of Bayard Rustin” (2003). “He knew he couldn’t be out there on the front lines, but everyone knew who he was and how important he was and what he was bringing to the movement.” 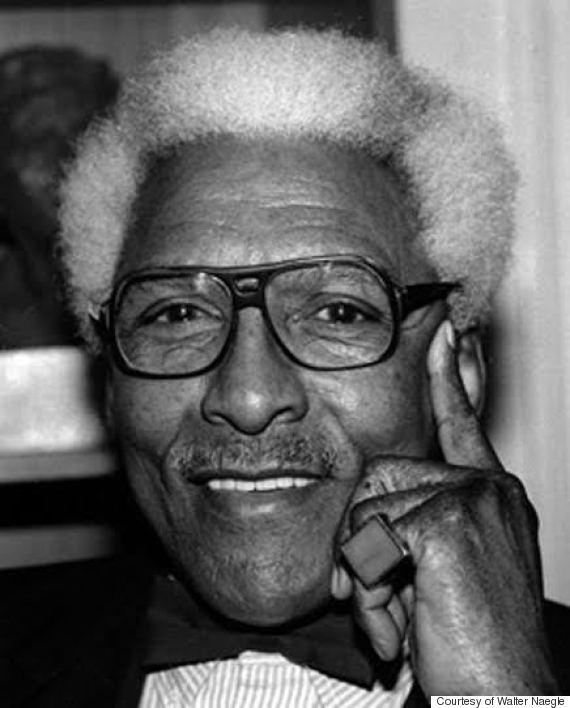 Bishop V. Gene Robinson, whose 2003 election as the first openly gay Episcopal bishop threatened to split the denomination, will deliver the sermon during an interfaith service Friday. Rustin will be represented at a Saturday ceremony at Independence Hall by his surviving partner, Walter Naegle, 65.

Naegle and Rustin met in 1977 in Times Square, and they were together until Rustin’s death in 1987. Rustin was energetic and charismatic, Naegle said. He sang with a beautiful tenor voice, dressed stylishly and often carried a walking stick.

“He was a lot of fun to be with,” Naegle said. “I learned about relaxing and facing life on its own terms and living in the moment from him.”

The two were 37 years apart in age. Since marriage was not an option, Rustin legally adopted Naegle in 1982. “He wanted me to have some rights in his care and in managing his estate,” said Naegle, who is white.

“Later in his life he saw LGBT rights as civil rights,” said Naegle, who encouraged Rustin in the late 1970s and early 1980s to accept invitations to speak to gay rights groups. In 1986, Rustin wrote to then-Mayor Ed Koch about a gay-rights bill.

“The question of social change should be framed with the most vulnerable group in mind: gay people,” he said in a 1986 speech.

Rustin grew up in segregated West Chester, Pa., where Ku Klux Klan parades took place at his high school football games. He was raised by his grandparents. His grandmother, a Quaker (Religious Society of Friends), modeled the ideals of pacifism, nonviolence and equality that influenced his writing and activism. She taught him to stand up — nonviolently — to injustice.

His activism began when he was a teen. He called for black and white players to be housed together when his high school football team traveled. He was also arrested for refusing to leave the white section of a movie theater.

Later, he went to prison for refusing to register for the draft in World War II, was arrested during a bus segregation protest in 1947 and organized a 1958 demonstration against nuclear weapons in England. He worked for the African-American labor leader A. Philip Randolph and with A.J. Muste, leader of the anti-war Fellowship of Reconciliation. Rustin helped King launch the Southern Christian Leadership Conference.

Nonviolence remained the common thread in his work. “The struggle can be won without brutalization,” he said in a speech. He called for “angelic troublemakers. … Our power is in our ability to make things unworkable. The only weapon we have is our bodies and we need to tuck them in places so wheels don’t turn.”

During the Montgomery bus boycott in 1955, D’Emilio said, Rustin became “tutor and mentor” to King, teaching him the tactics of nonviolent direct action that became central to the civil rights movement.

Rustin “believed in the linkage of issues before anyone was talking about it,” D’Emilio said. “It was Rustin who persuaded the NAACP that minimum wage legislation is actually a black issue because raising the standard of poor people in the U.S. will have a big impact on the black community.”

During a time when homosexuality was not accepted, “Rustin was amazingly accepting of himself and forthright,” D’Emilio said. “He never pretended to be heterosexual. It was a sort of truthfulness he embraced as an ethic.”

Rustin was arrested on a “morals charge” in New York in the 1940s. In 1953, he was arrested in Pasadena, Calif., for an “act of sex perversion” after police found him in a car with two men. He was sentenced to 60 days in jail. Some civil rights leaders feared that news of the arrest would harm the movement, and Rustin resigned from the Fellowship of Reconciliation.

King turned to Rustin to organize civil rights demonstrations outside the 1960 Democratic and Republican presidential conventions. Adam Clayton Powell, a Baptist minister and Democratic member of Congress, pressured King into canceling the demonstrations by threatening to accuse him of a sexual relationship with Rustin.

Rustin resigned from the Southern Christian Leadership Conference, and the two were estranged until the 1963 March on Washington.

“It scared King,” D’Emilio said. “Rustin didn’t mind working in the background, but this felt like a betrayal.”

Rustin’s Quaker beliefs allowed him to forgive King, Naegle said. “He believed we are all members of the same human family and we all have the divine in us,” he said. “He really remained a personal pacifist.”

Ahead of the 1963 March on Washington, King publicly supported Rustin, who worked with Randolph to plan the event. In early August 1963, South Carolina segregationist Sen. Strom Thurmond tried to derail the march. On the Senate floor, he criticized Rustin as a “Communist, draft-dodger and homosexual” and entered his 1953 Pasadena arrest file into the record.

This time, King and Randolph didn’t blink, and the march proceeded, drawing 250,000 people and becoming a turning point in the civil rights movement.

The recognition pleases Naegle, but he said Rustin would have preferred that people focus on injustice. “There’s still inequality, racism, income inequality, homophobia. He would be much happier if people picked up the mantle and continued the fight,” he said.