ST. MARTINVILLE, La. ― Jody Meche drives over the levee across from Louisiana’s famous Atchafalaya Basin and unloads his boat for another trip by the Bayou Bridge pipeline. Construction of the pipeline has cleared a path through one of the most environmentally sensitive areas of the state and created a vortex of controversy in the process.

“They’re completely devastating this area,” Meche, a 49-year-old commercial crawfisherman with a thick Cajun accent, told HuffPost as he backed his trailer down the boat launch. “They’re digging deep trenches, piling up mounds of dirt and grinding down our ancient cypress and tupelo trees, all of which is drastically altering the ecosystem.”

Meche lives in Henderson, next door to the house where he grew up. The small, close-knit community is a stone’s throw from the Atchafalaya Basin, the largest wetland in the country. Meche’s family has lived off the water for generations, but that lifestyle is becoming more difficult as the Army Corps of Engineers has greenlighted a network of pipelines now crisscrossing the swamps.

The latest is the Bayou Bridge pipeline, which has been under construction since February. Its corporate parent, Energy Transfer Partners, will use it to carry up to 480,000 barrels of oil a day through the Atchafalaya Basin to crude oil refineries and export terminals, according to the permit application. When finished, the pipeline will stretch 162 miles, connecting to Energy Transfer Partner’s equally controversial Dakota Access pipeline. The project is estimated to cost $670 million.

The Army Corps of Engineers is charged with examining the effects of projects that can potentially harm certain waterways. The permits and authorizations for the Bayou Bridge pipeline were signed by Col. Michael Clancy, the Corps’ New Orleans District commander.

Earthjustice, a nonprofit environmental legal group, first filed a challenge in January to the project and the Corps in federal district court in Louisiana. The group is also representing the Standing Rock Sioux in their opposition to the Dakota Access pipeline and argues that the Corps, in regard to the Bayou Bridge pipeline, did not adequately consider the potential threat to wildlife and the environment that a spill or a catastrophic failure might cause.

In February, Earthjustice attorneys won a preliminary injunction to halt construction of the pipeline while the January lawsuit is being heard. U.S. District Judge Shelly Dick found the lawsuit raised serious concerns about the possibility of the pipeline irreparably harming the Atchafalaya Basin.

“The court’s ruling recognizes the serious threat this pipeline poses to the Atchafalaya Basin, one of our country’s ecological and cultural crown jewels,” Earthjustice attorney Jan Hasselman said at the time of the ruling.

But in July, the U.S. 5th Circuit Court of Appeals overturned that order, allowing construction of the pipeline to proceed. The court found the pipeline would have “no incremental impact” on the Atchafalaya Basin.

Plaintiffs in the Bayou Bridge suit include the Louisiana Crawfish Producers Association-West, of which Meche is president. The nonprofit, which was formed in the late 1980s, is dedicated to preserving the Atchafalaya Basin.

“Hundreds of families in these communities adjacent to the Atchafalaya Basin depend on it for their income and food,” Meche said.

According to the U.S. National Park Service, the Atchafalaya Basin, aside from being a source of drinking water, has an estimated average annual commercial harvest of nearly 22 million pounds of crawfish and produces $123 million annually from recreational activities and tourism.

The Louisiana Crawfish Producers Association is concerned about the excavation methods and irresponsible placement of previous pipelines, which Earthjustice claims has already eroded and polluted the Atchafalaya Basin.

Before a pipeline can be laid, a near interstate-sized corridor must be cleared to accommodate the pipe and the large, amphibious equipment used to place it, which leave a significant footprint on the landscape. In the case of the Bayou Bridge pipeline, the corridors are 75 feet wide, with deep trenches to accommodate 24-inch-diameter pipes.

In 2003, the most recent data available, a joint study by the Louisiana State University and the Louisiana Applied Oil Spill Research and Development Program identified 130 pipes zigzagging throughout the basin. The majority of the pipes were placed in the 1970s and ’80s. Their owners removed swaths of trees to build them ― trees that served as a natural protective barrier from extreme weather. Earthjustice says companies also failed to backfill the large mounds of dirt, known as spoil banks, that they excavated.

Left standing, the spoil banks sever bayous, interrupt water flow and choke marshes with sediment, which then deprives crawfish and other creatures of oxygen.

“The catch overall is not even half of what it was 30 years ago,” Meche said. “I have to run two to three times more traps than I used to, and I catch less per trap. The water can’t come high enough to top all the spoil banks, and we have a lot of stagnant water, so the crawfish can’t survive.”

The spoil banks also cause erosion and act as barriers preventing natural sediment from flowing to the Gulf of Mexico, where it replenishes ground washed away by severe weather.

“They didn’t do their job in the past and are not equipped to do the job now,” he said. “They told us they don’t even have a boat to check violations. I said, ‘We’ll bring you on our boats.’ We took them, showed them violations, and now they’re forbidden to come in our boats.”

Ricky Boyett, chief of public affairs for the Army Corps of Engineers, New Orleans District, said he was “unable to provide comment on the Bayou Bridge Pipeline.” He directed questions to the U.S. Department of Justice, and a spokesperson for the department also declined to comment, citing “ongoing litigation.”

According to a report from the Waterkeeper Alliance, pipelines constructed and operated by subsidiaries of Energy Transfer Partners average one spill every 11 days, causing millions of dollars in damage across the country.

Construction of the Bayou Bridge pipeline was halted again last week due to a dispute between the company and several co-owners of a property who refused to grant easements to run the pipeline through their property. Energy Transfer Partners, which had already started trenching the property, claims it has the right to the use property through expropriation, a process used to take private land for public benefit, EcoWatch reported. A judge is expected to hear that case on Nov. 27, meaning the pipeline will not be operational by October, as initially planned.

The reprieve, says Harold Schoeffler, chairman of the Sierra Club Acadian Group, is only temporary.

“By Louisiana law, all they need is permission from one of the owners for an easement,” Schoeffler said. “But really, as far as trespassing would go, these properties are in the swamp, with no identifiable boundaries. Much of it is underwater now. The last survey was in the 1800s.”

Halting construction, Schoeffler warned, could turn out be a pyrrhic victory. If the courts ultimately side with the pipeline company, the company could decide to take the landowners to court.

“Stopping a multimillion-dollar activity is something you never want to do because the company could decide to come after you for millions of dollars in lost revenue,” said Schoeffler. “They didn’t become billionaires being crazy, and they could use it to set an example so no one will ever try this again.”

Energy Transfer Partners did not respond to a request for comment. Last fall, company spokesman Alexis Daniel told NBC News, “We can’t speak for other pipelines, just the one we will be building and that we will build it according to all the rules and regulations of our permit, once approved.”

“I say I’m not an environmentalist,” he said. “Well, if someone cares about the area they grew up in and wants to preserve it and keep it pristine and productive as possible ― if that’s an environmentalist, then I am. If somebody doesn’t step up, we’re going to lose it all.” 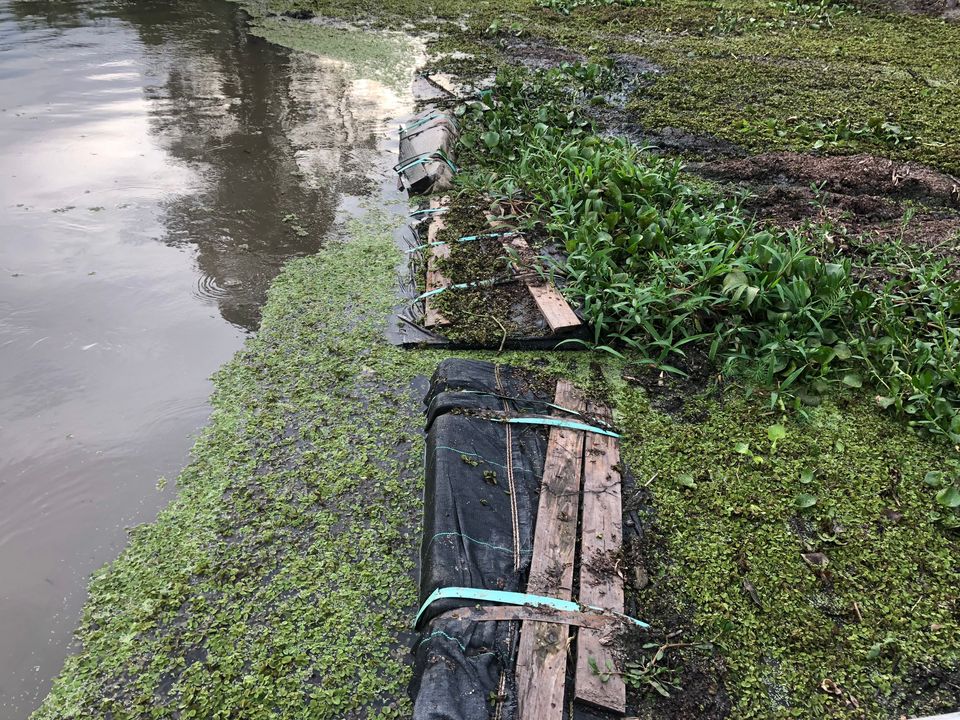 1 / 16
Pipeline
The Bayou Bridge pipeline has been under construction since February. Its corporate parent, Energy Transfer Partners, plan to use it to carry up to 480,000 barrels of oil a day through the Atchafalaya Basin to crude oil refineries and export terminals.
David Lohr