Twinkie The Kid isn't the only advertising icon at risk of being eliminated due to business decisions beyond his control.

Now, it looks like Bazooka Joe, the eyepatch-wearing bubblegum mascot, is being chewed up and spit out by Topps, Inc., after a 59-year career appearing in tiny three-or-four panel cartoons that doubled as wrapping paper.

As part of a rebranding effort, Bazooka Candy Brands, a division of Topps, Inc., has decided to get rid of the comics and replace them with puzzles and brain teasers, the New York Times reported.

Joe isn't completely being swallowed up by the corporate machine. He and his pal, Mort, the weird-looking guy who wears his turtleneck sweater over his mouth, will appear in inserts, but the cheesy jokes that were a hallmark of the more than 1,535 strips will be gone. 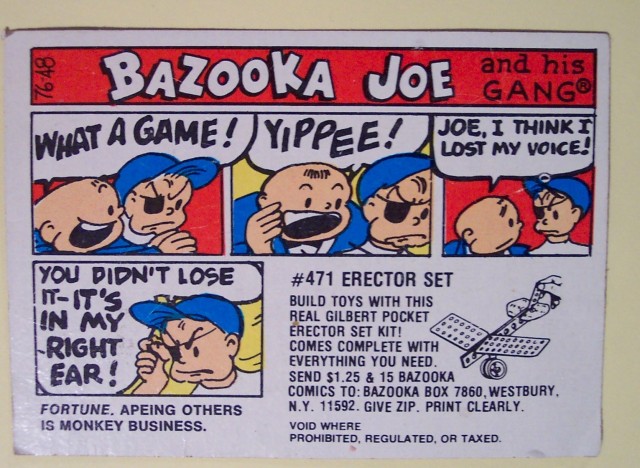 The rebranding effort may help boost sales, but Bazooka could be shooting itself in the foot, according to Jeff Gomez, who specializes in taking classic brands.

"He's the essence of the brand," Gomez told The Huffington Post. "How this plays out will be an object lesson . . . You're pulling the engine out of the car."

Bazooka Joe debuted in 1953, but animation historian Jerry Beck said the comic always seemed of an earlier time, even back then.

"It was the cheapest candy you could buy and even in the 1960s, it felt like something from the 1940s," Beck told HuffPost. "Unlike other comics, there was no origin. No explanation how he lost his eye."

Since Bazooka gum is notoriously hard as a rock, some schoolyard scientists have speculated that Bazooka Joe lost his eye when a bully threw a piece at him and it went into his socket. Another theory bandied about the playgrounds is that the missing peeper popped out of Joe's skull while he was chewing the leathery sweet.

Bazooka officials insist Joe has 20/20 vision and only wears the eyepatch to give himself a distinctive look, according to The Straight Dope.

As a kid, Beck wondered if Bazooka Joe had been a real strip that had been kicked out of the Sunday comics and forced to be a bubble gum shill. He still wonders why the characters never appeared in comic books or cartoons.

Gomez has wondered that, too, especially since there was talk in 2009 about turning Bazooka Joe into a movie star. Screenplays were reportedly written, but Gomez said they couldn't crack the character.

"Maybe the character is not updateable, and the company felt it had to do something or else Bazooka would become a nostalgia brand like Pop Rocks or Sugar Babies," he theorized about the current effort to give Joe the heave-ho.

It might seem like the jokes were never updated over Bazooka Joe's nearly 60-year career, but Jay Lynch, who wrote jokes for the character between 1967 and 1990, said that he would switch out old reference to ragtime with heavy metal when he needed to update old cartoons.

Some Bazooka Joe jokes were even original, he told columnist Gene Weingarten recently.

"Bazooka Joe had a girlfriend named Zena. So I had her call and order something with a credit card. They ask her name and her expiration date, and she says, 'How do I know when I’m gonna die?'" Lynch said.

"Over the last few years, they've tried too hard to be hip, using GameBoys and skateboards," he told HuffPost. "My niece and nephew thought they were stupid and had a hard time relating to the eyepatch."

Considering the outcry over Twinkies, it's possible there will be a similar baby boomer Bazooka Joe backlash, but Burgess thinks that's a long shot.

"I think there will be a few minutes of sentimental whining, but not like the Hostess meltdown," he said.

There is some hope for Bazooka Joe fans. A collection of the comics will be released next year.