All men can see these tactics whereby I conquer, but what none can see is the strategy out of which victory is evolved. Sun Tzu

Why is this index important?

It allows individuals to gain insights into how the global markets are performing. As the world is now one big interconnected bazaar of sorts, it pays to see how the rest of the world is faring before you commit new money to the markets.
The BBC Global 30 Index combines the economic information of 30 of the world's largest companies. If it is faring badly, then it's a signal that the global economy is not healthy and vice versa. Let's start off by looking at the 1-year chart as this gives us an idea of what to expect in the short term.

The one year chart illustrates that all is well on the surface and that the process of flooding the markets with hot money, in general, is working rather well. Yes, logic dictates that the markets should not be faring well as many economic indicators are suggesting otherwise. Two leading economic indicators such as the Baltic Dry Index and Copper are both stating the global economy is far from healthy. The Baltic Dry index is trading well off its all-time highs; in fact, it is trading very close to its all-time lows. The Baltic Dry index is used to provide insights into future economic activity; if the index is trending upwards, it means that global trade is rising and vice versa. As the prices are updated daily, one can measure on a real-time basis what is going on with the global economy. Currently, it indicates that the global economy is far from healthy. Copper works in a similar way. It tends to start trending upwards before the economy and the markets and vice versa. Has it been in a downtrend for years? Why are these two important leading economy indicators providing the wrong data? They are not providing the wrong data, but this article illustrates in detail as why these two time-tested indicators are no longer of use. In essence, hot money is what is fuelling this market, and that is why after almost nine years this is still the most hated bull in history.

How do things look going forward?

The index could drop all the way down to 7200, and the short-term outlook would remain bullish. We are fully aware that this economic recovery is illusory, but complaining and whining about this does not provide one with any extra insights into the markets. We need to focus on what is going on and how the masses interpret that data. The truth is irrelevant if only you are aware of it; if the masses think otherwise, what appears as the truth to you could, in fact, be viewed as a lie by the crowd. The truth can set you free, but in most cases it can be detrimental to your health and wealth; at least as far as the markets are concerned. 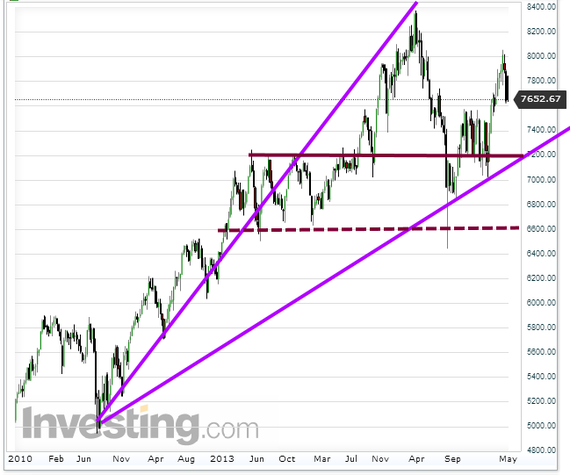 The longer term chart illustrates that this index is consolidating. As long as it does not close below 6600 on a monthly basis, the outlook will remain bullish. One could even argue that is its building a base from which it could easily springboard to and past 8400. Ideally, the current pullback will end in the 7100-7200 ranges, with a possible overshoot to the 6900 ranges. This index is informing us that even though everything out there is twisted and manipulated the financial markets are behaving as if everything is fine and dandy. The same theme applies here, the stronger the pull back, the better the buying opportunity

The overall trend in the BBC Global Index, as well as the Dow industrials, is up, and so we will repeat what we have been stating for quite some time now; the stronger the correction, the better the buying opportunity. The markets are trading in the overbought ranges, so it goes without saying that traders need to be both prudent and patient. Prudence dictates that investors should wait for the markets to let out some steam before committing new capital. Volatility is the name of the game and here to stay. From Aug of 2015 to the month of May, the Dow has traversed over 7000 points. It is just a matter of time before the markets let out some steam and as usual, the naysayers will come screaming out of the woodwork stating the end is nigh, just as they did in Aug of 205, Jan 2016 and on countless occasions before that. Despite the severe beatings they have taken over the years, they will still muster the courage to chant the same old song as stupidity seems to be in a perpetual bull market.
Take time to deliberate; but when the time for action arrives, stop thinking and go in.
Andrew Jackson