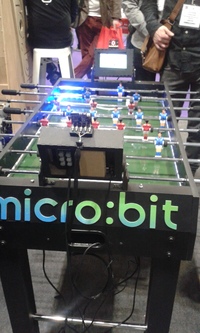 Amidst a renewed effort to get young people interested in a career in science, technology, engineering or mathematics (STEM), a raft of simple yet powerful computer programming interfaces have emerged to provide children with a first step into the exciting world of technology.

Whether it's platforms such as AppInventor or Ratchett helping children to develop mobile apps, or the likes of Raspberry Pi helping them develop hardware based programs, there is a growing number of ways for children to get started in computer programming.

Arguably the most ambitious project in this burgeoning field however is Micro.bit, a BBC led project that has a consortium of 29 industry heavy weights, including ARM and Samsung behind it.

At the recent BETT Show at the Excel in London, I was given a tour of micro.bit by Kevin Spurr, the co-founder of consortium member Kitronik, who have developed a range of very cool add-ons for the micro.bit to allow users to develop some very smart projects.

Micro.bit is a pocket sized computer that users can program and customise to do all manner of things, whether it's playing games or building apps. It's designed to be incredibly simple to use, with simple programs codable in seconds with no prior knowledge of programming required.

The micro.bit is designed to be modular, and therefore works incredibly well with other pieces of kit, whether that's the Raspberry Pi or Kitronik's numerous add-ons.

The micro.bit comes with a number of key features, including:

The project is completely open-source, so any applications developed by children via the micro.bit website is open and available for other children to use and build upon.

Getting micro.bit out to 1 million school children

Spurr explained that 1 million micro.bit devices will be handed out to year 7 school children across the UK for free in the coming months in a bid to revitalise interest in science and technology.

The device provides an easily programmable interface that, through the various partners, allow the child to do some pretty cool things. For instance, I saw how children could control their smartphone via micro.bit with the app that has been developed by Samsung for the project.

There is a critical skills shortage in the UK technology sector, with the government attempting to rectify that by ensuring 25% of STEM graduates are female by 2030.

The UK currently has the lowest level of female engineers in Europe, and projects such micro.bit are a major part in trying to improve matters.

Tony Hall, Director-General of the BBC says: "Just as the BBC Micro introduced millions to personal computers 30 years ago, the BBC micro:bit can help equip a new generation with the digital skills they need to find jobs and help grow the UK economy. It's the unique role of the BBC that allows us to bring together an unprecedented partnership to deliver such an ambitious project."

The wide range of experiences provided by the consortium members opens up a rich range of possibilities for the project. For instance, the Institute of Engineering and Technology are running a number of Faraday Challenge Days, where students can experience a one-day off timetable STEM activity day. Or you have the possibility of recruiting children as citizen scientists for larger projects through the Wellcome Trust.

I'm sure as the project develops then many more avenues will be explored and exciting opportunities developed for children to engage with technology.