While war has inspired innumerable works of art in many disciplines, a faltering or corrupted economy has been a lesser creative stimulus. Yet the current "Capital Crimes" exhibition at BC Space Gallery, Laguna Beach, California is in the vanguard of shows tackling the latter concern.

The show features 60 artists from little known to nationally recognized, working in a broad range of styles including drawing, painting, sculpture, assemblage, installation, photography and video. The pieces, woven together and dialoguing from one to the next, create a cohesive indictment against this country's horrendous financial woes; they speak to the gut of the collective viewers in a way that few editorials and/or news anchors can.

BC Space, located on a downtown street with its upscale shops screaming for attention from passersby, is entered through an inconspicuous steel door and a steep narrow stairway. Yet once up the stairs, the gallery is a world away from the street outside. In the first gallery room, the large, colorful "The Money Game" (2009) by Scoot Moore depicts a lone individual striving to rein in a large pig balloon with "AIG" emblazoned on its side. Various other financial forces are represented by toys floating in the sky, including: our personal monetary problems (a piggy bank), our failed mortgages (a monopoly house), the formerly ailing auto industry (a toy car) and our financial interests abroad (a globe bank), while randomly placed chess pieces illustrate the money game that seems impossible to play. 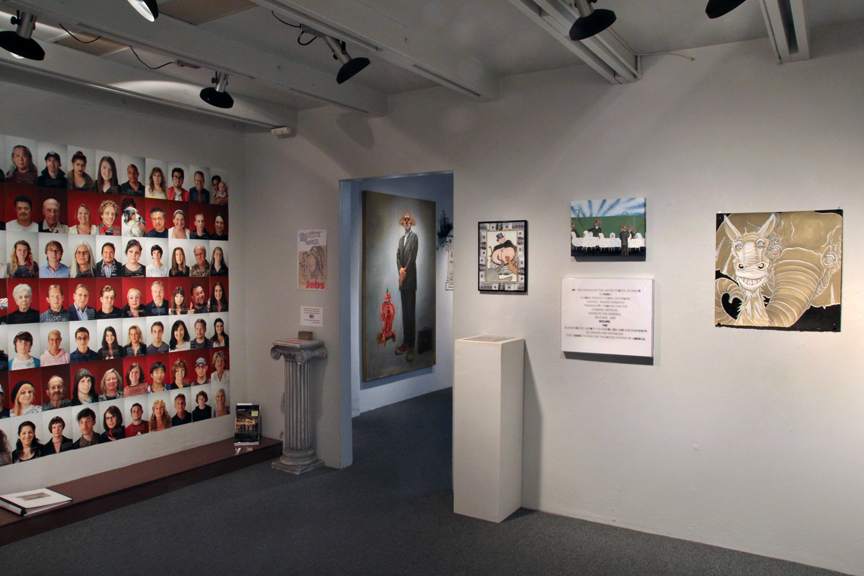 Also in the entryway is James Lorigan's acrylic Joker (2006-07), featuring a parrot (the Joker) perched upon a barbeque spit over the hell pit, fishing for people who fell into the economic hell pit. The artist explains, "The anemic response to Hurricane Katrina was the initial inspiration for this painting, while the parrot represents those who were poised to jump in and profit from the resulting disaster."

In a nearby gallery, Iranian born Darya Sohl's Glory & Greed (2012) is a large American flag. Representative names of the 6,500 U.S. men and women killed in wars in the last decade are written in oil on the red stripes of the flag. The Arabic prayer read at Iraqi funerals is written on dollar bills glued to white stripes of the flag. The dollars in turn symbolize the huge cost of war and the concurrent massive increase of wealth for "elite" corporations.

A wall-sized flag, "Economy Portraits" (2012), is a powerful statement about the anguish caused to common citizens by the 2008 economic calamity. By photographic artist Gina Gennis, the flag is comprised of portraits of dozens of people who responded to the question, "How has the economic crisis affected your life?" and who agreed to have their written answers superimposed on their portraits. The portraits in turn represent the flag's stars and stripes. 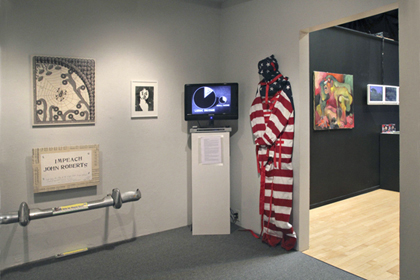 Mark Leysen's "Modus Operandi" (2012), a vibrantly attractive resined collage, combines the iconic dollar pyramid with radiating chopsticks, suggesting the China influence, and logos from rapacious oil and financial corporations. This piece addresses the interdependent relationship of international executives and corporations, and how they scheme together regardless of the peril they might inflict on common individuals and on their own respective countries.

One of the brilliant contributions made just for this show is Lev Anderson's video, John Doe Falling Down (2012). This digitally edited short is based on found footage from the 1941 motion picture, "Meet John Doe," starring Gary Cooper and from the 1993 drama, "Falling Down, starring Michael Douglas. Interwoven with these is an assortment of clips from classic cartoons and educational footage. The video demonstrates how our formerly healthy democracy and free market economy are devolving into a rapacious plutocracy. 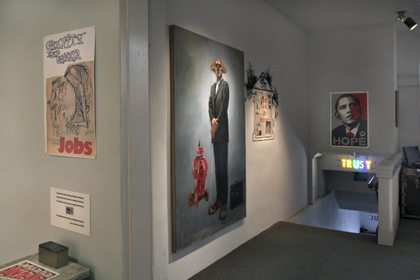 Other pieces, among many more in "Capital Crimes," include: "We the Sheeple" (2012), a painting and play on words of "We the People" by Jorge Sicre; Scot Sothern's "Watchful Eyes" (2012), a photograph from the series, "Drive-By Shooting." showing an invisible America of people and situations we pass daily in our cars without even seeing; Jessica DeStephano's "Z Modern Crucifix" (2012), mixed media assemblage of Christ on the cross of money; Glenn Brooks' "Equal Justice Under Law" (2010) woodblock print, in which the a few rich people far outweigh the numerous poor; and Douglas McCulloh's "Dollar Web" (20120, a photoshopped collage, addressing the issue, "Which declining and dangerously violent Empire from history do you find most equivalent to the U.S. -- Roman Empire, Mughal Empire, Umayad Caiphate, or Golden Horde Khanate?"

Capital Crimes" is curated by BC Space co-founder and owner Mark Chamberlain, a photographic artist with degrees in political science and economics. This background (and a military tour of duty during the American war in Viet Nam) provided him with unique qualifications and motivations to tackle big issues as war and greed in an art context. This smart show, with its diverse artistic visuals and well-researched didactics, ingeniously addresses today's monetary inequality. Yet if does so with a light hand, filled as it is with humor and irony about our complex economic issues.