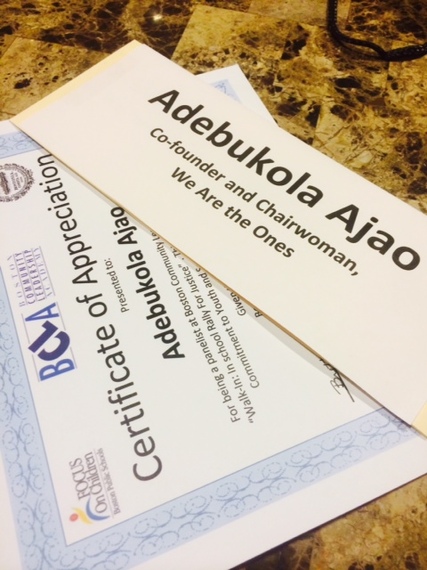 On January 5 at 1:00pm, Boston Community Leadership Academy staged a "Walk-In," in response to the growing protest around the nation demanding for the demilitarization of our police force, and recentering conversation surrounding the value we place on black people in America. An amazing, and well-informed panelist comprised of Community organizers, students, educators, professors and police officers joined BCLA for a panel conversation surrounding some of the most trending topics regarding this issue. These panelists helped BCLA understand what is occurring in the nation, ways they can positively fight back and the resources available to them. Terrance Smith, local author, documentarist and advocate for Social Justice, moderated a panel of activists from Black Lives Matter, We Are the Ones, Youth Against Mass-Incarceration (YAMI), Beantown Society and many other organizations. These are my responses to the January 5 panel at BCLA.

1. Since the shooting of Michael Brown in August our nation has witnessed some of the biggest social protest since the "Occupy" movement in 2011. Before we explore the topic more deeply, what have the last 6 months felt like to you?

The last six months were always in a state of flux. It constantly moved in out and of joyfulness, sorrow, love, change, determination and defeat. With this work of activism, leading and teaching young people the truth, one should expect anything and everything. The normalcy of the killings of black bodies was and still is outrageous and I was angry over the past few months. However, I have channeled this negative energy to create positive change.

2. As a positive member of your community, what do you do to gather others to acknowledge this cause? What are some of your tactics for spreading the word and mobilizing others?

My team is very grassroots. We will be in you inbox as well as in your mailbox. We will call you on the phone, meet with you or contact you through airwaves. I use a lot of methods to get young people to listen. In my marketing training, I learned how to make an elevator pitch. You have to pitch this movement to people because we are living in the era of the sound bite (instagram, vine, snapchat). More than seventy percent of the world is asleep, just like the people in this room are asleep. This generation needs to be shocked with the truth. How many people need to die before we wake up? Young people of today cannot afford to be unconscious, especially youth of color. I hold Black Student Union meetings on a weekly basis and every week our attendance grows. Though the BSU serves Emmanuel College students, we welcome our guests from neighboring schools and professionals. Through these meetings we spread the truth and we educate ourselves on an intellectual level. We not only talk about issues, we read about them and we think critically about them.

3. In our society social media sites such as World star Hip Hop, Twitter and Facebook have become primary spaces in which we get our news. Many of these sites provide videos and partial information, without context. What can we do to best inform ourselves about the real facts, so that we can be informed community leaders?

This is where media literacy comes in. This is partially an individual effort but it is also the responsibility of our education system. In order to check and balance out all these negative, ignorant and false information that we are consuming daily, people need to be given the proper tools to do so. Informing ourselves can only go so far because there is a bigger issue at hand when instant gratification is involved (hence instagram). As I stated before, everyone wants information quick, fast and without interruption and that oftentimes distorts the search for the truth. I challenge young people to challenge EVERYTHING they see, post or hear. Do your own critical research and ask questions from people who are scholars in that field or have a certain expertise in that subject. There are millions of books, scholarly articles and thousands of teachers and professors who have dedicated their lives to certain subject matters. Don't be afraid to reach out to them. The question is are you prepared to do the work?

4. Many of the buzzwords being thrown around by news stations and Social justice advocates are racism, racial profiling, black men and police militarization. Can you please tell us what you know about any of these words and how they are connected? Can you help us understand why these are the trending words and why we need to understand what they mean?

These words are highly connected. In a nutshell, racism often begets racial profiling of black men and police militarization allows this to occur disproportionally in the black community. People often confuse racism with discrimination and prejudice. Racism is very structural and institutionalized. It is a top-down process of a majority group oppressing and hindering the progress of a minority group. For example, I cannot be racist. As a black female and of the minority group, I am too powerless to be racist. It's very important that people make these distinctions because the term has been used in the wrong context for far too long. Racial profiling is a method to act out racist beliefs but I've learned that you don't have to be a card-holding member of racism to racially profile a person. Racial profiling is a method used by law enforcement to determine who is "black enough" to arrest today or kill today...

5. Recently there was controversy surrounding the #Blacklivesmatter hash tag being changed to #Alllivesmatter? Why were many people outraged at the name change, and what is the larger motive behind the campaign name and mission?

When we say black lives matter, we are not saying other lives do not matter. We are simply making an affirmative statement that A LOT of people, over centuries, did not and still do not believe in this country. Every 28 hours a black person is wrongfully killed by the police force. When you try to downplay our movement by saying all lives matter you are disrespecting Black Lives Matter. All lives do matter! Duh! We know that. That's like saying the sky is blue. It's a premise of life. But black lives DON'T matter in this country and we have been shown that in actual and subtle ways.

6. Now that we have delved into the topic, what should our student's next steps be to get involved?

I was asked to respond to these quotes and I chose #3.

1."Cops should wear body cams, but what's the point if blatant evidence of their crimes still allows them to walk free #ICantBreathe" (Twitter)

3."Not all police officers kill, lets find a solution together" (NYPD Officer)

When we chant "NO justice NO peace, NO racist police" we are talking about the RACIST police, not the "good" ones. And I say "good" because I am inclined to be suspicious of anyone who joins the force based on the history of policing from the KKK until now. I am sure the majority of police officers are good but they have contributed to police brutality in America by being silent. The silent majority is just as bad as the racist ones because they refuse to stand against injustice on a mass level.

A young man asked the panelists "How come there's no protest when a black person gets shot in the hood? What are y'all doing about that?"

My team's slogan is "We cannot wait on our Martin. We cannot wait on our Malcolm. We are the ones we have been waiting for." In that case, I will pose the same question back to you. What are you going to do about the violence in your community? YOU ARE THE ONE! You can't wait on Martin and Malcolm because they are not coming. You can change the narrative of your community and your life by taking a stand and saying enough is enough. We are here as resources for you to make that possible.