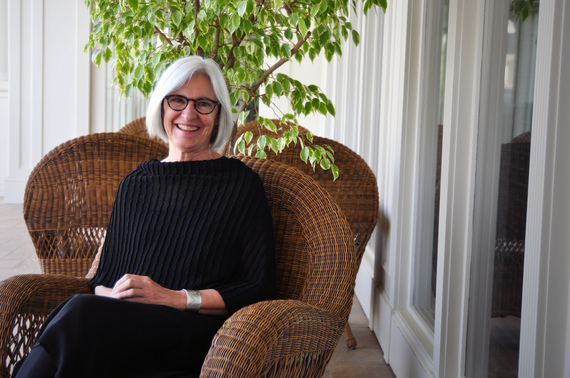 After finishing college at the University of Iowa, Eileen Fisher moved to New York City and bounced around between a couple of jobs before working for a Japanese graphic designer.

She had many Japanese clients, and visited Japan frequently. While there, she noticed the simple and elegant beauty of the Kimono. This gave her a flash of inspiration.

She had always loathed getting dressed. As a woman, this was a rather arduous chore compared to how men get dressed. She had a vision of clothes that were made of simple shapes that were easy to coordinate, like men's attire, but were also elegant and comfortable.

In 1984, at the age of 34, she decided that she was going to start a clothing business based on her vision. There were two significant obstacles, however. She didn't know how to sew, nor did she know anything about business.

She believed in her vision, though, and soon discovered that her designs really appealed to people. The first four simple shapes she created generated $3,000 worth of orders at the Boutique Show she was encouraged to attend. Based on that success, she expanded her line a bit to eight pieces and generated $40,000 in orders at the second show she attended.

Although Fisher's innovative designs clearly played a large role in the success of her company, she mentioned to me another key element of her success when we spoke recently in Washington, D.C. It turns out that her greatest obstacles were actually her greatest strengths.

"I've always been a 'don't knower'," she said. "I've always been very comfortable saying, 'I don't know.' As a result, there's a sense of openness. When you don't know and you're really listening intently, people want to help you. They want to share."

As the company was first getting started, Fisher's "don't know" approach allowed her to get great advice, for free, from many experts and successful business leaders. The help she received was instrumental in helping her get her business off of the ground.

Today, Eileen Fisher, Inc. employs over 1,100 people, has over 60 retail stores, and will likely generate over $300 million dollars in revenue in 2015.

Between then and now, despite her success, Fisher never lost her "I don't know" approach. As a leader, she was very comfortable saying to team members, "I don't know. What do you recommend here?" This empowered other people to step up and become leaders.

"This leads to radical participation," Fisher said. "People feel safe to explore their own ideas instead of feeling like they just need to do what you tell them to do."

"We often say that 'there's a leader in every chair'," Fisher continued. "We all have to be leaders at different times."

It appears that Fisher has been quite successful at developing other leaders. In 2005, she sold the company to the employees, who have successfully run the company since. Fisher is now the Chief Creative Officer.

Throughout our chat, I was struck by how present Fisher was. She is truly a great listener. I was also struck by how she seems to embody the Eileen Fisher brand. She is so simply elegant: not just with her attire, but with her authenticity and comfort in being exactly who she is.

I had the impression that although she was very confident in her ideas, she was never fully confident in her abilities to bring those ideas to life as business person. She nearly always felt as though she truly "didn't know," and she's been perfectly okay with that.

But recently there's been a shift. After a lifetime of being a "don't knower," asking lots of questions, and listening really well, Fisher realizes that today she knows a whole lot, and there's a desire to give back by sharing what she's learned on her journey.

"Now I feel as though there's a new point of balance. I'm comfortable staying open to all that I don't know, but I'm also comfortable with all that I do know and can share," she said. "One of the key messages I'd like to share with aspiring entrepreneurs is that they don't have to know everything."

I would take this one step further and suggest that, as Eileen Fisher has shown us, aspiring entrepreneurs and other leaders are likely much better off if they don't know everything, and are willing to own that.