Julia Claiborne Johnson's debut novel Be Frank with Me is narrated by Alice Whitley, an optimistic, young woman sent from New York to LA to act as full-time assistant to M.M. Banning (aka Mimi), the reclusive, prickly writer of the legendary novel "Pitched." The novel won Mimi "a Pulitzer and a National Book Award by the time she turned 20," but after its publication she never wrote again. Now Mimi has been "swindled of her fortune by a crooked investment adviser." As a result, she's forced to write a second novel to keep a roof over the head of her only son Frank, an extremely eccentric 9-year old obsessed with Old Hollywood and vintage fashion.

While Alice imagined she'd be typing up Mimi's manuscript, she soon finds her job mostly entails looking after Frank, who is prone to meltdowns, encyclopedic monologues and repeated viewings of Casablanca. Alice soon finds herself trying to keep Mimi and Frank from various calamities, even as she struggles to understand the secrets of both their family, and their sexy handyman/piano teacher Xander.

Hilarious, poignant and full of unexpected gems, Be Frank with Me illuminates the strange ways literature can parallel life, and introduces readers to one of the most charming, lovable and maddening children in fiction.

I had an email exchange with Julia Claiborne Johnson about the novel. 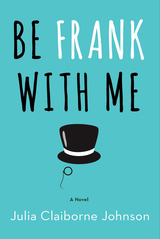 You drafted Be Frank with Me long before news broke that Harper Lee's Go Set a Watchman would be published. And yet some of the language in your novel oddly parallels the reality of the publication of Lee's Watchman. For instance, you wrote, "...a second book from M.M. Banning. Good, bad or indifferent, it would be a bestseller." Do you attribute this to some strange zeitgeist? Or to a bizarre coincidence?

How weird is that? I started writing my book six years ago. It had already been bought and was being edited when the rumors of the Harper Lee book started. My agent sent me something about it from maybe Publisher's Weekly. I broke into a sweat. What did it mean? Was I clairvoyant? Oh, how I wish. I think it's a case of zeitgeist plus coincidence, with a dash of Hollywood branding thrown in. When I drive around town here, I see a lot of posters that say, "From the directors of..." or "The producers of..." Out here, the money guys like investing in things that will break big out of the gate, so recognizable names plastered on anything--a movie poster, a book jacket--can translate into money in the bank. I guess that's true everywhere. But if you're a name-brand author like Harper Lee or JD Salinger who chooses not to write, as far as anybody knows anyway, despite billions of fans who would like nothing better than to read another of your books, what would it take to make you produce again? After the Bernie Madoff thing broke here, lots of Hollywood people who'd made all the money they ought to ever need, creative people who aren't always the most financially savvy, came out of semi-retirement to recoup their swindled fortunes. So I was mulling over all these things when I started writing. Mimi writes her novel because she's lost all her money and compounded that disaster by mortgaging the copyright to her one blockbuster novel. She has a kid who doesn't like change and she needs to keep a roof over his head. So she does what she has to do.

Mimi's son Frank is an eccentric child, obsessed with old Hollywood and dedicated to extreme fashion. How did you come to create this character?

Well, like I said, we live in Hollywood. My husband is a comedy writer, and he's worked on a lot of different lots--Paramount, Sony, Universal, and others. Paramount is a mile from our house. They have an amazing backlot. Breakfast at Tiffany's was shot there, and those Astaire/Rogers musicals. We live a ten-minute drive from Mann's Chinese Theater, where the handprints in cement are. So, it's in the air around us.

Also, we watched a lot of old movies at my house, since, you know, when you have kids watching with you, you aren't sitting around on the couch, catching up on your Tarantino. Let me tell you something. The characters in the old black-and-white movies knew how to dress. Of course, I understand that Edith Head or Adrian were picking out their clothes for them; but there was real genius at work there. Soon after I got out of college, I got a job writing at magazines in New York--at, among others, Mademoiselle and Glamour. Vogue was in our building, too. While I was there, I became obsessed with the fashion people. They put together such breathtaking ensembles; but I'm telling you, some of them couldn't cobble a coherent sentence together. It was such a lesson for me about the different kinds of intelligence. I had always valued the run of the mill, academic intelligence that kids who do well in school have. I suspect a lot of the fashion people I worked with washed out of arithmetic. I had direct evidence that they couldn't spell. And what they knew of geography was based on where they flew for fashion shoots and where the shows were being held that season. But they were brilliant with clothes. I felt bad for them for being inarticulate; they felt sorry for me because I was frumpy. I had to give them props. It wasn't like I walked down the street in Manhattan and saw people looking at me and thinking, "Wow, that girl can write!" So when I was trying to come up with what kind of genius Frank would have, I decided to make him visually splendid in a way most kids aren't. I thought of him as the lovechild of Karl Lagerfeld and Diana Vreeland, who learned his way around a cravat from his uncle Fred Astaire.
I should note here, too, that my father-in-law was a snappy dresser, and my husband and our son. So maybe that's a genetically-linked trait. One I don't have. Whenever I needed a little sartorial inspiration, I went and shuffled through my menfolk's closets.

Though in real life a child like Frank might likely be diagnosed as having Autism or Asperger's, in the novel, Frank's unique and strange qualities are never labeled. Why did you choose not to give him a formal diagnosis?

That was a deliberate choice on my part. When my daughter was in middle school, she was reading To Kill a Mockingbird. So I reread it then. Now that I'm adult living in the 21st century, a mother instead of a middle-schooler, and one who's seen all kinds of kids filter through my children's public schools, I realized, "Oh, Boo Radley has some form of autism." A lot clicked into place for me then. Characters on the spectrum have always been in fiction; people just didn't realize it was a thing you could put a label on. The nice thing about labels is it gives you a way to understand what's going on with a person; but it can be limiting, too. Everybody's different, and categorizing individuals like that can can take that away from their individuality. While I was mulling all this over, I remember thinking to myself, "Well, it's easier to write Boo Radley than to raise him." That's how Frank was born. That's why his mother, Mimi, had to be a writer. I liked thinking of Frank as a kid who travelled out of the past through a wormhole in the space/time continuum, from a time before labels existed. He was brilliant, eccentric, dodgy of hygiene and awkward around others. But more than any of those symptoms, he was Frank. 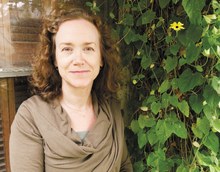 Julia Claiborne Johnson, author of Be Frank with Me

Be Frank is narrated by Alice, a young publishing assistant sent from New York to Los Angeles by her boss and Mimi's editor to help Mimi "navigate computers and keep her household running until the book was finished." I've heard tell that your daughter says that Mimi is the mean version of you and Alice is the sweet version of you. What do you think about this assessment?

It makes me laugh because it's right on the money. When I was Alice's age I had the Pollyanna thing going on like she does. Life was awesome and everything was going to turn out just great if you approached the task at hand with perseverance and a lot of patience. I knew I was going to be a fantastic mother, because I'd never been one. Mimi's middle-aged and has seen how terribly things can go wrong even though you've been trying your best to do right. She's exhausted. Mimi knows she's in control of exactly nothing, particularly not her child. She's understands that kids come out pretty much however they're going to be, and you just have to try to protect them as best you can. Mimi's idea of a good day is one when you make it through without somebody going to the emergency room or something blowing up. A decade or so of the kind of parenting Mimi has had to do is enough to make anybody cranky. Also, Mimi's naturally cranky. I'd like to think I'm Alice all the time, but I suspect I veer off into the Mimi when the chips are down.

Before sending Alice to look after Mimi, her boss Mr. Vargas tells her that: "Los Angeles is a paradise on earth, Alice...You can't blame people for being seduced by it." You've lived in L.A. for many years. Do you agree that it's a paradise.? And what are the risks of being seduced by its charms?

Los Angeles is incredibly lovely. It smells good. The people here are unusually beautiful. It's really Shangri-La. If you're used to seasons that mark the passage of time and the progress of your accomplishments, living here can make you lose your mind, Here, you look out the window and say, "What a beautiful day! It would be such a shame to waste it!" So you rush outdoors to bask in it. The only trouble is, every day is beautiful. If you rush outdoors to take advantage of every day, decades can pass and you've gotten nothing done. My husband always quotes this Orson Welles thing that says something like this about LA: "You sit down when you're 25, and when you stand up, you're 62." That happens to people here. So many people come out here to be famous, but only a fraction of them will be. But the possibilities are so tantalizing. One job could change everything for you. Hit it big, and you get the keys to the mansion and the Tesla and you end up with the most beautiful spouse on the planet, even if nobody appreciated you in high school and you stayed home the night of the prom. People get seduced by that. You can't blame them for dreaming big. Why not stay and gamble on making it? Just one more day in a crappy apartment you share with five other people next door to a car dealership in Van Nuys, and who knows? You might finally grab the golden ring.