The best way to understand the future of work is to go talk to people outside our comfort zone and become an adventurer pursuing possibilities. If we continue to have the same conversations with the same people, go to the same conferences with the same people, or read books by the same people, what will happen? Well, much of the same in a nutshell. And today, we have created the same culture, one of sameness. One in which everyone is getting to get together to find out what the heroes have done so we can capture their best practice and then go do the same thing that they did. Won't that guarantee success?

Albert Einstein made us aware that this type of behavior is the definition of insanity. It's like someone telling us the 17 foods that we shouldn't eat. We may be one of 500 people listening to his talk capturing a photo of these 17 dangerous foods. But then when we sit back and reflect, we realize that the person up on the stage doesn't really know us. They have no idea what our body chemistry is so how could they know what's dangerous to us? The best advice that she could give us is to stop eating mass produced garbage and start eating whole foods. After a recent talk on 21st century leadership at a conference, someone came up to me and told me that while she loved my talk, I covered a lot and she wishes I had provided the five key takeaways at the end. I thanked her and shared with her that as I don't know her, I could not provide her with her five takeaways. I was happy to talk and and learn more about where she was in life.

#1 Something remarkable is indeed happening

There is no short cut, magic carpet, best practice or formula for the new world we are entering in this century. The 21st century leaders from around the world that have generously contributed to Our Journey to Business Common Sense: What's New is Old (stay tuned for the upcoming crowd funding campaign for the book launch) continuously share with us that the new economy is human-to-human. The leaders and organizations that get the shift that is happening in our world will thrive. We don't need any more change programs in the 21st century as change is constant. What we desperately need is a mindset change. And here are some of the main areas to think about that are emerging from real live stories of 21st century leaders in the book.

Notions of fear, scarcity and competition no longer serve us. For us to "win" in the 21st century means that there is enough for everyone. The organizations that get it have let go of the notion of taking market share away from their competitors. They are spending their energy on connecting with people who believe in their products (their customers) and building unlikely and unusual partnerships. Why? Because they can in a world that is open and connected.

Only 2% of the population knows how to use social media tools to build relationships; the rest are stuck in 20th century branding and are using old advertising models that no longer resonate with many people. Most organizations are so stuck in their social media strategies that they are missing opportunities every day to build their business with the people who care about what they create in the world. So it's time for a massive reboot of our mindsets. We have everything we need. We just need to open our eyes and hearts and see it.

Most of the people are sharing with me that they are doing the work in the world they believe in and at some times, at huge personal costs. I have the honour to talk to people from around the world who care deeply about themselves, their communities, the world and the planet. Every single person has a story of wanting to bring the team back together to do meaningful work. And every story is not about bringing more band-aid solutions but taking on a big issue in their organization or the world and bringing people together around shared purpose. One told me that she not only wants to make a dent in the universe but she wants the universe to make a dent in her.

People no longer wanted to be segmented and fragmented into a box or a label. We have spent so much time on organizational structure that the cracks are starting to show. And when we know how to use technologically effectively, we no longer need to talk about it as it is simply an enabler of our life and our work. Technology is not changing the workplace. The fact that it can connect us and allow for open dialogue (where not censored) is making so much more possible in our world. 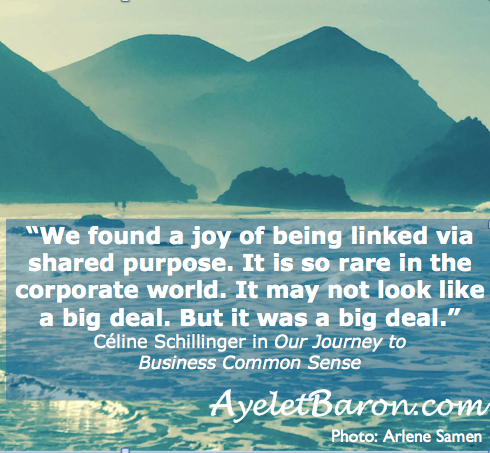 #4 - Waking up to the human-to-human economy

In a human-to-human economy, it's all about relationships. The biggest currency of the 21st century is trusted relationships and community. The days of sales pitches are coming to an end and the most important question any organization and individual can ask themselves and know the answer as well is who do you trust? And most importantly, who trusts you? In this economy, you need to know what are you creating and who wants it.

Our collective consciousness is awakening to the fact that consumers have a voice and they will make a point of being heard more and more. Our organizations have antiquated terms like "customer service" and "employee engagement." A new world is emerging that make these terms irrelevant. In business, you will need to know how to simply share your creations (products or services) with the world and connect with the people who could benefit from them. You will need people who believe in what you are creating and that your values match theirs. It will no longer be an issue whether they fit into your culture in the new world of LIFEworking.

There is an excitement amongst 21st century leaders that we are able to incorporate good and people in how we do business. There are conversations emerging around what people will want in exchange of their time. The days of patriarchy are coming to an end as more women will stop buying into the fragmentation that exists today and simply create new spaces for solving problems. That is what the 21st century leader does; she brings people together and does not always have the answer.

This is the era to pick ourselves and not wait to be picked. The increasing number of women leaving to start their own businesses is an indication of it and large organizations need to start shifting so more women stay and help them lead in the 21st century. In a world where we pick ourselves, organizations will need to re-evaluate and update most of their legal, human resource and back-end systems as they will quickly stop supporting how business is done.

One of the biggest wishes people have is that their colleagues stop hoarding information. One of the reasons for the epic failure of Enterprise 2.0 was that we led with the technology instead of the human side of work. We poured millions of dollars into creating change management programs to convince people to go to use online platforms instead of integrating the tools into how we wanted to work. We know that people don't like change and yet we continue to think we can stage old world campaigns to convince them that this new way is better. And too often, the people paying the bills for these massive change management programs don't understand that if they simply integrated these tools themselves, they'd all be using them already.

And imagine a world where people in your organization would have access to the people and information sources to do their work and make the organization successful. What would that look like in your world?

Collaboration has been so over used that it may have lost some of its meaning. If people in the 21st century wake up in the morning and are able to practice their art in their work, then they are able to create something meaningful. An increasing number of people are realizing they want to grow and are looking for others to come together and create more meaning in the world. This trend is taking place increasingly outside of large organizations where people who would have competed in the past are coming together to work together. It's coming from the contingent workforce, which is a $1.17 trillion economy now, and it's growing. As we live in an open and connected world, it is time for large organizations to start thinking about unusual and unlikely partners to co-create with or risk missing an amazing opportunity to re-invent their business for the 21st century.

Back to writing now. I'd love to hear your thoughts ... they may make it into the book!