By Anna Davies for YouBeauty

Made lunch out of the leftovers found in the fridge. Talked your co-workers into agreeing on a solution to a client problem. Tweeted a wry observation about last night's episode of "Nashville." While it may sound like any other day, all of these instances are examples where you've flexed your creative muscle. And, like any other muscle, the more you use it, the stronger it gets, giving you an edge at home, at work and in social situations.

A lot of people have misconceptions about what "being creative" means, which makes it hard for them to tap into their full potential. Here are six major myths about what creativity is -- and how to bust them to let your imagination break free. 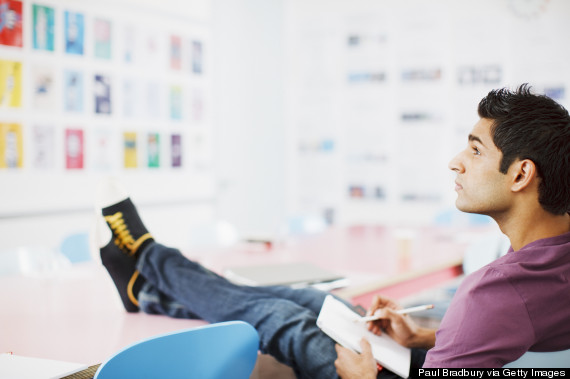 Hear the word "creativity" and feel a shiver of dread up your spine instead of a spark of inspiration deep in your belly? It doesn't mean you lack imagination, only that it's been hidden somewhere along the way. "Everyone has the capacity for creativity," explains David Goldstein, an artist, creativity consultant and co-author of Creative You, a book that explores the connections between creativity and personality. "But what usually happens is that their imagination gets shut down in early childhood. For example, a 5-year-old will paint the sky purple because she thinks it looks pretty, but if someone criticizes it or laughs at it, she'll quickly learn to stop following or trusting her creative impulses."

Luckily, for those of us still scarred by awful art class memories, creativity doesn't require a paintbrush -- or an A+ from an art teacher.

Myth #2: Creativity = Art
"Recognizing your natural creativity is the first step in enhancing it," says Goldstein. Just because you're not a poet or a painter doesn't mean you aren't creative. Are you a pro at putting good conversation partners together at dinner parties? Do you always seem to know the right thing to say at occasions where the people around you are tongue-tied? Then your creativity manifests itself in relationships. Maybe you're as good as any trainer at the gym at putting together a fun and rigorous workout routine. That's creativity, too. Swept up by 3-D films? Starting a blog about the subject can give your imagination a chance to soar. 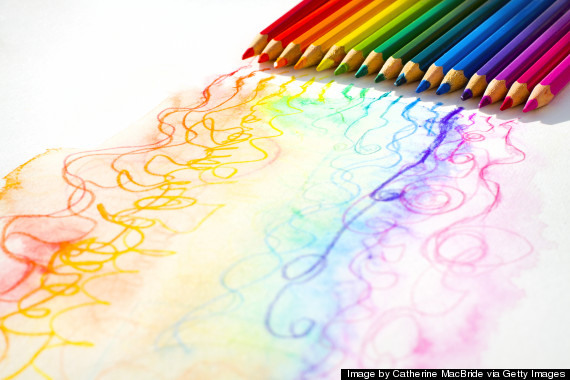 When you're swamped, you've got to keep your head in the game, not in the clouds, right? Not exactly. Taking a mental break from a particularly pressing problem by indulging in creative play can help you come up with more solutions when you finally do get back to work, says Goldstein. Not only that, but studies have found creative expression is linked to stress relief, better physical and emotional health, higher self-esteem and even better sleep.

Myth #4: Some people are "the creative type" -- and some aren't.
It's like the old adage says: different strokes for different folks. Goldstein divides creativity into different types based on personality in his book. "One of the big factors affecting creativity is introversion versus extroversion," explains Goldstein. "Extroverts innovate best by interaction, whereas introverts may innovate best by quiet reflection."

If you're highly extroverted, for example, you're likely to find your bursts of creativity while talking with friends, instead of reflecting solo in your car. Meanwhile, if you're more introverted, you may find yourself overwhelmed during an office brainstorming session, but then figure out an awesome solution in the shower the next morning. "Knowing when creativity is likely to strike for you wards off discouragement and keeps your mind open," says Goldstein.

Find out whether you're an introvert or an extrovert by taking our personality quiz as a first step in sussing out where your spark is most likely to be set off.

Myth #5: I don't have time for creative stuff. 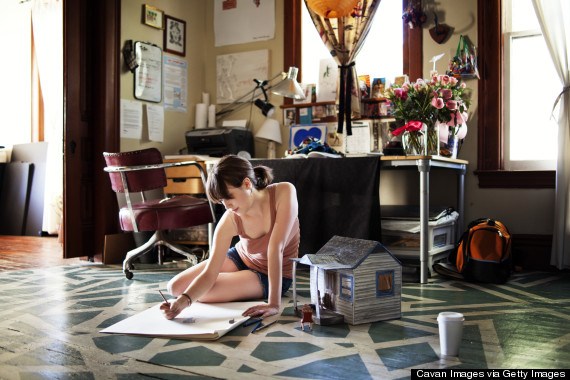 You may find yourself inspired by various artists, writers or directors, only to feel completely paralyzed to even attempt to do your own thing when you hear your creative idol writes five hours a day, or spent 10 years working on their directorial debut. The image of an artist devoting every waking hour to his craft makes "creating" seem overwhelming for ordinary people, warns Goldstein, but you can boost your creative side in just a few minutes. That, in turn, amplifies your capacity for self-expression and joy, says Lee Crutchley, illustrator, designer and author of The Art of Getting Started, a workbook designed to jumpstart creativity. "Doodling while you're on the phone, taking one photo a day, or writing a page of a story every week all count. The trick is not to worry about whether or not it's good, but just enjoy the process."

If it works for you to sit and write five pages every morning, by all means, do it. But if you prefer to jot a few notes in your journal only when you feel inspired, it doesn't mean you're lacking in dedication.

Myth #6: Creativity means doing something.
Watching movies, reading books or finally watching "Breaking Bad" from the beginning may seem passive, but each can actually be incredibly creative -- if it's done with intention. Instead of just vegging out, think about the why behind whatever you're seeing, explains Crutchley. Why did the director use that shot, or what did the character mean when he quoted a line from Shakespeare? "The aim of any creative project is to say something," he continues, "so questioning what a creative project is trying to tell you helps you figure out what you have to say yourself."

More from YouBeauty:
5 Fun Apps to Make You Smarter
6 Things That Influence Your Dreams
How Alcohol Boosts Creativity

5 Ways To Capture That "Aha!" Moment

More:
healthy livinghow to be more creativecreativityGPS For The Soulcreativity tips

The Most Common Questions About The Novavax COVID Vaccine, Answered