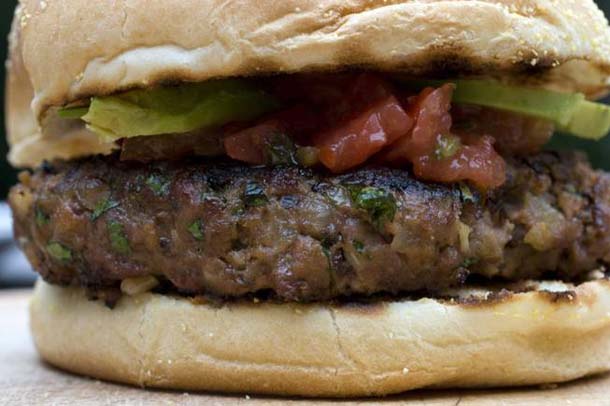 The Washington Post published a provocative essay on Sunday that makes the case that hamburgers are the least patriotic food you could eat on the Fourth of July.

"Why your hamburger hates America" looks at the unsavory reality behind the production of hamburger meat and buns, as well as traditional burger garnishes--tomatoes, onions and lettuce. When it comes to the beef itself, author Tracie McMillan points out that just four corporations control more than 85 percent of the meatpacking business. That means it's more likely that cattle are treated inhumanely, workers are treated inhumanely, food safety is given short shrift, and small ranchers are being driven out of business.

It's not a pretty picture, but it's even worse than that. McMillan left out two other major downsides to eating burgers: They're a threat to public health and the future of the planet.

A report released last week by the Union of Concerned Scientists (UCS), "Grade A Choice: Solutions for Deforestation-Free Meat," found that Americans would improve their health and protect the climate if they replaced beef with poultry or pork--or just ate less meat altogether.

"We have a big beef with beef," says Doug Boucher, director of UCS's Tropical Forest and Climate Initiative and a co-author of the report. "The more beef Americans eat, the worse global warming gets."

By now, most Americans are aware of the health risks posed by eating beef. It's been linked to a number of potentially life-threatening problems, including coronary heart disease and breast, colon and prostate cancer. But most hamburger, steak and brisket lovers are likely unaware of the environmental problems caused by beef production.

Beef is what scientists would call an "inefficient protein," Boucher explains. It requires substantial resources to produce compared with what it contributes to the human diet. The report found that beef production uses about 60 percent of the world's agricultural land, for example, but produces less than 5 percent of the protein and less than 2 percent of the calories that feed the global population.

Cattle ranching requires huge tracts of land. In Brazil--the biggest net exporter of meat in the world--and other Latin American countries, ranchers clear-cut tropical forests to provide pasture land for their herds. This contributes to global warming in two ways. First, when ranchers cut down trees, much of the carbon they store goes into the atmosphere. Second, grazing cattle produce methane--a powerful gas that has nearly 25 times the warming effect of carbon dioxide--which is released from their stomachs and manure.

Tropical deforestation is responsible for about 15 percent of the world's heat-trapping emissions--more carbon pollution than the emissions from every car, truck, plane, ship and train around the world. As demand for beef goes up worldwide, so too does deforestation.

There are no tropical forests here in the United States, but we can play a role to protect them. If Americans curbed their beef consumption, it would help cut global demand. That, in turn, would lower beef prices, reducing the incentives to cut down forests for cattle pasture land. Lowering demand also could help cut production here at home, where beef cattle--which are mainly fattened in feedlots--account for more than a third of all U.S. agricultural heat-trapping emissions.

"There are a lot of tasty alternatives to beef hamburgers, not only on the Fourth of July, but all year 'round," says Boucher. "Why not try spare ribs, pulled pork sandwiches, turkey burgers or chicken kebabs?"

Although it may seem more Italian than American, pasta would be an even better choice, according to "Cooler Smarter: Practical Steps for Low-Carbon Living," a book published by UCS earlier this year. The book found that producing one pound of beef emits as much global warming pollution as producing 18 pounds of pasta.

Given that every American eats on average some 270 pounds of meat a year--nearly four times the global average--any reduction in U.S. meat consumption would be helpful--and more healthful.