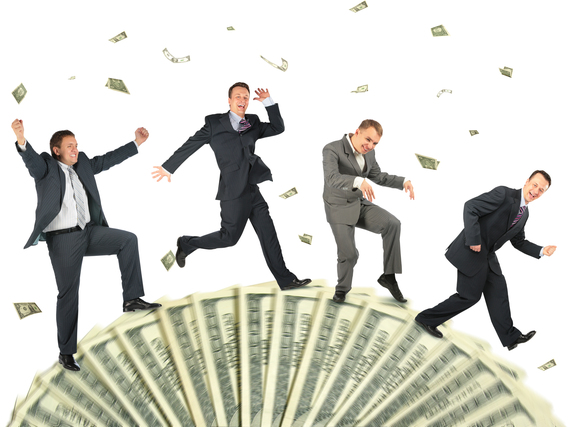 I was recently preparing to deliver a large culture change event and a senior manager from the business approached me and said, "I want to warn you, Samie. Pay letters went out yesterday so some people might be very disengaged." It got me thinking, if pay is meant to motivate employees and improve performance, then does it?

There's a superb article in CIPD's People Management magazine called We can make you work for less, exploring how the psychology of pay could end our fixation with annual increases and performance-related bonuses. "Psychological research has consistently suggested that where money has motivational power it is nearly always negative," writes Adrian Furham, professor of psychology at University College London. A major reason is that money (an extrinsic reward) crowds out our innate desire to do a good job (intrinsic reward) and leads to behaviors that work against employers' interests.

Money carries an 'emotional charge' that goes far beyond its economic function. It's a tool we can use to acquire things we desire, which we means we covet it, but more powerfully neuroscientific experiments show that it also acts like a drug, stimulating areas of the brain associated with immediate gratification through the release of dopamine.

This emotional charge manifests even in very simple experiments that show people are drawn to the physical form of money: we feel a sense of loss when a familiar coin changes shape, even though its value remains the same. We manage virtual money less effectively than cash. What's more, money is symbolic. Pay is a form of social approval. The obvious inference is that if organizations want to motivate their staff to deliver on organizational ambition, they should decouple pay from performance and introduce incentives that play to employees' intrinsic motivations, which are generally agreed to be autonomy (the ability to direct your own life and work), mastery (the opportunity to get better at something that matters), and purpose (the desire to do what we do in service of something larger than ourselves).

Would performance fall as a result? Dan Ariely conducted an experiment, asking groups of volunteers to repeatedly drag a circle on a computer screen into a box, recording how many times they did it in five minutes. He paid the first group $5 dollars for their efforts, the second group 50 cents and the third group nothing - but told them they would be doing him a favor. The first group dragged on average 159 circles into the box; the second group dragged 101 circles and the third 168. This, says Ariely, demonstrates that incentive pay can work in certain circumstances, to a certain extent. The fact that the most productive group was the one doing a favor illustrates the supremacy of social norms over market norms.

Another lesson from behavioral science is that people react more strongly to something being withdrawn, even if they don't particularly value it, than they do to something being given to them, even if the new thing is of higher value. In psychological terms, this is known as 'loss aversion'. In short, you can lose £5 one day and find £5 the next, but you won't feel like you've broken even.
According to behavioral scientists, performance-related pay fails on several counts. It undermines our need for autonomy (because of monitoring required); it works against our desire for fairness if we see others earning more; and if we get a smaller proportion of performance-related pay one year, we suffer from loss aversion.

While no organization would be advised to withdraw performance related pay altogether, there are insights to be gained from the growing body of research in the field of behavioral science that can give reward practitioners a better understanding of how to incentivize people at all levels. It will require a cultural shift from traditional extrinsic motivators like annual bonuses and Long Term Incentive Plans (LTIP) and towards intrinsic motivators, which could be timely given the current economic environment. Indeed, you can get as much dopamine from someone saying thank you or well done, as you can from getting a pay rise. The chemical effect is the same.