Powerful works of art inevitably inspire and surprise. They stir up emotions and, on occasion, even make you indignant and uncomfortable. But to make you want to throw up? No, that would be too much, wouldn't it be? At least that's what I thought before my confrontation with the new exhibition of Ed Kienholz'sFive Car Stud at LACMA. Completed forty years ago, this massive, life-size sculptural and sound installation is exhibited here in the United States for the first time, though in the 1970s it was shown throughout Europe and subsequently was acquired by a Japanese collector who kept it locked in storage through all those years. 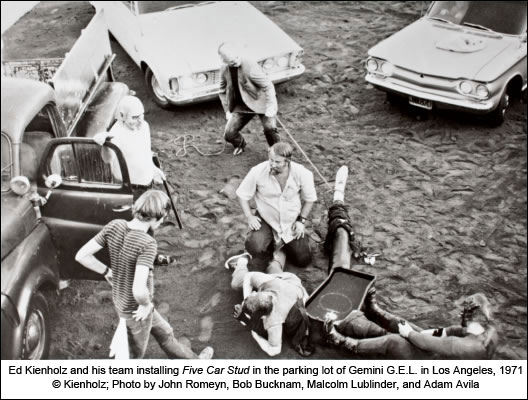 So, here we are -- in the middle of the night, in a forest. It's pitch dark, except for one spot flooded by the headlights of five cars circling the scene of a horrific crime. Several white thugs surround the black man they have thrown to the ground, his limbs pulled apart. One of the tormentors -- with a knife in his hand -- is just a second away from castrating his victim. 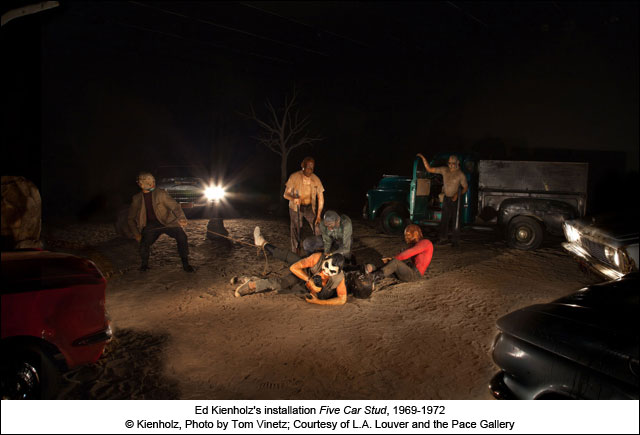 That each of the white men wears a grotesque, smiling rubber mask makes this crime even more nauseating. The very fact that you, in a state of shock, walk around observing the various aspects of this scene makes you more than just a witness of the crime. Somehow it implicates you. No matter how loud your scream or cry might be, the horror will not stop. 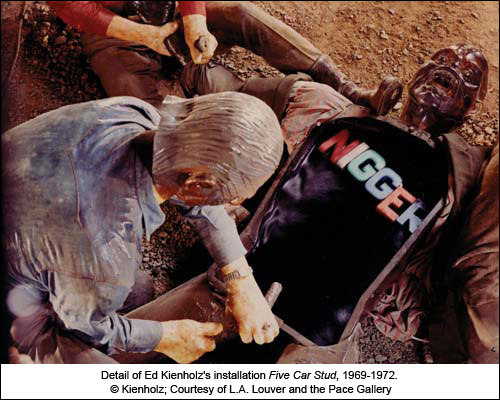 Ezra Pound once famously said that "Poetry is news that stays news." Definitely, the same can be said about any great work of art. And that's why, standing in front of the scene of the crucifixion painted centuries ago by, say, Caravaggio, Rembrandt or Rubens, one is overwhelmed by a surge of emotions.

I'm not ready to claim that this installation by Ed Kienholz is a great work of art, but it is undeniably an amazingly powerful work. And though decades separate us from the most violent period of racial hatred in this country, the work will remain unsettlingly relevant as long we live in a world perpetually rattled by violence: national, racial, religious, ethnic -- you name it.

In 1966, during the Ed Kienholz retrospective at LACMA, police attempted to close his exhibition because of the sexually explicit nature of his infamous installation Back Seat Dodge, which is now part of the museum's permanent collection. I can safely predict that Kienholz's current LACMA exhibition, in spite of its much more inflammatory nature, is not in any danger of being shut down, especially after the L.A. Times gave it an unprecedented editorial high-five.

One also wants to compliment museum senior curator Stephanie Barron for staging this difficult exhibition with such precision, achieving maximum effect without going over the top.

For another example of an expert curatorial job, you want to head downtown to the MOCA headquarters on Grand Avenue, where, in honor of the recently passed-away Cy Twombly, eight of his paintings, on loan from L.A. mega-collector Eli Broad, are elegantly installed to the most poetic effect by the museum's chief curator Paul Schimmel. That's a man who knows a thing or two about organizing world-class exhibitions. 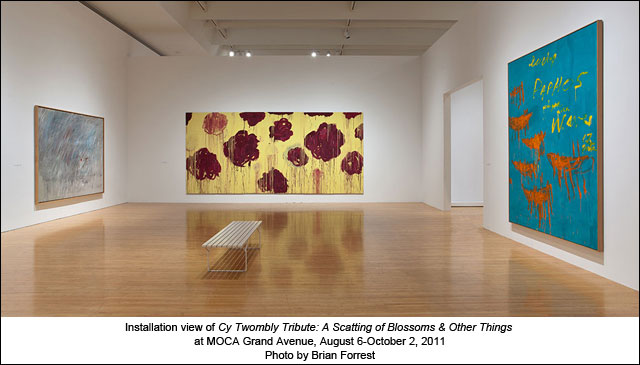 Through the years, I've seen many installations of Mr. Broad's collection, but never done with such eloquence. One hopes that, when Mr. Broad's new museum opens on Grand Avenue, his remarkable collection will be exhibited there with more passion and flair than has been given to it in its recent tenure at LACMA.

Edward Goldman is an art critic and the host of "Art Talk," a program on art and culture for KCRW 89.9 FM. To listen to the show and hear Edward's charming Russian accent, visit Art Talk on KCRW.