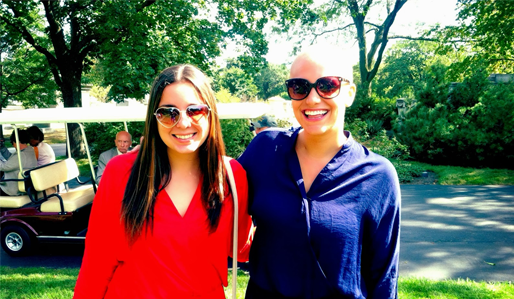 "They told me not to worry about it."

These are the words my friend used to sum up a recent doctor's appointment she had. This friend was present for every minute of my fight against cancer, so when she found a lump in her own breast she went to have it examined. Her doctor said there was a lump, ordered an ultrasound and mammogram, and sent her home with a "don't worry about it."

Empty phrases like that, along with "I'm sure it's nothing," "God wouldn't give you more than you can handle," and various others are often shared to offer comfort. In reality they usually invite a daydream involving punches to the speaker's face. I understand why the average Joe says them -- it's what we've been trained to do. We fill the uncomfortable spaces that follow bad news with anything we can. But I find it particularly aggravating when a doctor says this. Are you sharing this because you've already felt lumps in other breasts today, and know that the majority of them are actually nothing to worry about? Because to me that feels like you are minimizing my feelings surrounding a serious topic. Are you saying that because it's what you think I want to hear? Well let me make something clear to you, doctor: That is not what I want to hear.

So my friend calls the number for scheduling. The first location offered her an appointment in a week and a half, and the second had space for her in three weeks. I wish hearing their schedule availability was as shocking to me as it was to her. When I found a lump in my breast, I was told I could be seen four days later. I marched into the doctor's office that very same day and demanded to be seen even though my appointment was days away. And when I was told I would have to wait a week for an ultrasound, I called other offices until I found one that would see me sooner. I told her it probably would be fine to wait a week, but I had to make sure she knew there were other options.

To say I received incredible medical care would be an understatement. I was also the patient that made a name for herself in the hospital -- I made friends with everyone. So when my best friend called me with an all too familiar situation my first instinct was to get her to "my people." I made a phone call to my nurse explaining the situation. I sang the hospital's praises, and then bluntly said that we could figure out a better option for my friend. The nurse gave me a number to call, a specific person to talk to, and the right names to drop. My friend made the call, followed my nurse's instructions, and suddenly had an appointment for 8:30 the next morning.

Why did I have to make a phone call for my friend's health to be handled in a serious, timely manner?

I understand that much of life is about who you know, but is this really true when it comes to our health? When I was begging hospitals all over the country to treat me with radiation, the only reason I found a place that would take me was because of a phone call made on my behalf. When I called on my own I heard for the hundredth time that I didn't qualify. I happened to be very close to one of the lawyers for this particular hospital and when she initiated a call, acting as my advocate as she talked to their head doctor, we almost immediately heard a "yes." I was able to receive the treatment I needed because of who I knew, just like how my friend became a priority because of who she knew.

But what about all of the people who don't know someone? Who informs patients of what's available to them? Who ensures that each patient gets the highest standard of treatment they deserve?

Sadly, there seems to be a lack of resources to answer these questions. At times, even under fantastic care, I found a difference in what I knew was available for me and what actually was available for me. So who spoke on my behalf the majority of the time? I did.

Cancer was the first time in my life where I had to be an advocate for myself. Maybe it's pathetic that it took a threat to my life to learn to speak up, but regardless it's a lesson I will never forget. I pray that you learn from my experience before finding yourself in a similar one. I went from a girl who accepted the answers she was fed to a woman who demanded the ones she wanted. From day one I saw that no one else was going to do it for me, so it was either take the wheel or spin out of control. It didn't take courage. It didn't take status. All it took was opening my mouth.

If there is something troubling you about your health, confront it. If you don't think your chemo nurse is giving you the care you need, ask for a new one. If you're not getting answers, demand them. Hospitals are full of loving people who are usually willing to meet your needs--you just have to express them. You can't assume that others will advocate for you and you don't have to settle on answer A without seeking B, C, and D.

Speak up. Be your own advocate. You are in control of your own health and life.