When you engage in debates on the Internet, every so often you run across an argument that is so moronically airtight that you can't do anything but stare at your screen in amazement. It's as if the extreme ignorance or shortsightedness is so dense it's created an impermeable fog around the person spewing it, and you have no choice but to concede defeat because compassion, reason, and logic would die of suffocation before they ever reached the intended target.

I just had one of those debates.

After my last post about why street harassment is not a compliment, I've been called a "feminist dope," had men question whether catcalling actually happens "in real life," been accused of only disliking street harassment when it's not from "brad pit" (sic), and been told I was "such a loser" because of my stance, which more or less boils down to "Please don't yell offensive things at women."

Apparently this is a more controversial request than I would have thought. But I try to ignore the comments like those above that I and other women receive for speaking out against sexual harassment for the same reason it's wise to ignore Holocaust deniers and Donald Trump. So it was against my better judgment that I responded to this tweet, pointed out to me by a fellow feminist:

I know, I know -- this is a lost cause. Those of you more experienced with Twitter arguments are shaking your heads already, I can feel it. But I endeavored anyway, sending a volley of tweets that explained that harassment is not a "right" and can in fact be a crime, and that just because you can do something (i.e. be disrespectful of or sexually harass women) doesn't mean that it's a good thing to do. All of which ultimately elicited this response:

Charming. You can really tell he thinks these "chicks" are almost people!

Now I have to say that this is some next level tone-deafness, but it goes part and parcel with male privilege and entitlement. Let's break it down:

Believing that the negative consequences of your words and actions have nothing to do with you displays a profound lack of empathy and a particularly acerbic brand of willful ignorance, not to mention a disturbing failure to recognize the humanity/agency of others. Lack of empathy is also a hallmark of a handful of diagnosable mental disorders, including narcissistic personality disorder and antisocial personality disorder, the latter of which encompasses both sociopathy and psychopathy. I don't say this to imply that Mr. Free Speech is (legally) mentally ill, but rather to demonstrate that the callous attitude he expresses toward the feelings of others -- women, in this case -- is widely considered to be damaging. At its extreme, it's clinically deviant. When confronted with such negative behavior in other realms -- say, the classroom or the political arena or in a relationship -- it's easy to recognize it and condemn it.

So in order to end my participation in the insanity, I offered: 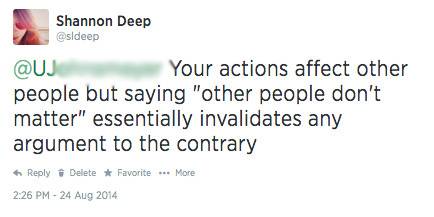 What I wanted to say, but couldn't in 140 characters -- and would probably be wasting my time to try to explain -- is that this "that's their problem" mantra is a short, short reach from all the blame-shifting that occurs in misogynistic hate speech. Just think of Elliot Rodger, sentencing women to die for the crime of not giving him what he believed he deserved: their bodies for sex. They were the ones who were wrong to withhold it! If a girl doesn't like what a guy is saying or doing to her, then the demented logic is that there's something wrong with her and not the guy doing the saying or doing.

I don't need to change anything about how I think about or treat women, reasons Mr. Free Speech, because the right women will recognize I am acting appropriately. If they don't like me, that's their problem.

And really, that's the common theme that I found while sifting through the caustic responses to my last article and to many attempts to hold harassers accountable for their actions: a tantrum-like refusal by some men to spend even one second of introspection considering whether a women on the receiving end of street harassment might actually be saying something true about street harassment. Because who was I to comment on the behavior of the same men who feel entitled to freely comment on my body, clothing, demeanor, and expression? How dare I publicly judge their public judgment?

After my last tweet, my hopeless shout into the vacuum of this guy's reasoning, it wasn't quite over. Mr. Free Speech had an ace up his sleeve -- irrefutable proof that his utter indifference to the wellbeing of the women he catcalls is indeed a correct and viable worldview:

Hear that, all you "randoms" out there? There's a beach house somewhere full of you that proves that street harassment is a perfectly acceptable way to go about picking up women -- the ones worth picking up at least. Besides, why aspire to be a better person, to be respectful and kind, to treat women like you'd want your mother or sister or daughter or yourself to be treated, when you can simply verbally harass women within the legal limit? This is America, damn it! All the rest of you who hate the First Amendment can take this guy's advice and just deal with it. After all, he has rights.