BREEZY POINT — The beached whale that died in Breezy Point will be buried on the beach it washed up on, officials said Thursday.

Biologists from the Riverhead Foundation for Marine Research and Preservation have gotten permission from the National Park Service to bury the 60-foot whale in the dune line of the beach it washed up on Wednesday, according to a spokeswoman from the National Oceanic and Atmospheric Administration's Fisheries Service.

"This makes the most logistical sense," said the spokeswoman, Allison McHale, in an email. "We hope to have the equipment needed to move the whale tomorrow."

The endangered finback whale, the second largest of all whale species, was found on the sand near Beach 216th Street and Palmer Drive in Breezy Point shortly after 10:40 a.m. Wednesday.

Police and firefighters sprayed the whale with hoses until officials from the Riverhead Foundation arrived on scene and determined that the animal was not going to survive.

The whale was monitored through the night, and after drifting with the tide 300 yards northeast from its original location along the bay Thursday, the animal was confirmed dead by the NOAA. Biologists said the whale likely died overnight.

The Riverhead Foundation will work with the National Park Service, the Department of Sanitation and the Army Corps of Engineers to secure the correct equipment to move the whale, and then will begin the burial process either Friday or Saturday, McHale said.

A necropsy will then be conducted at the site of the burial, McHale said. 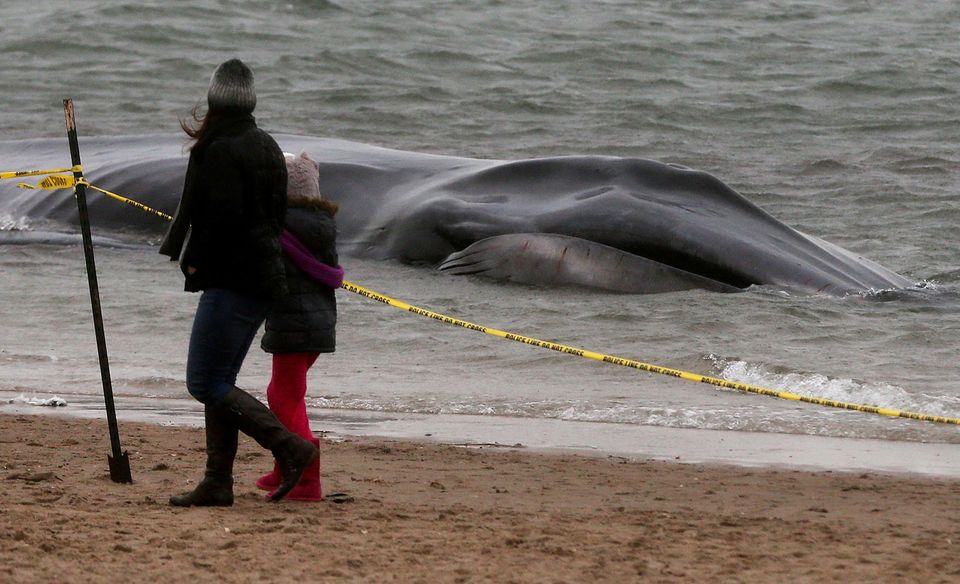 1 / 11
Large Whale Beached At Breezy Point
NEW YORK, NY - DECEMBER 26: People walk past a beached whale, still alive, in the Breezy Point neighborhood on December 26, 2012 in the Queens borough of New York City. Breezy Point was especially hard hit by Superstorm Sandy. Rescuers believe the whale will not be able to be saved. (Photo by Mario Tama/Getty Images)
Getty Images