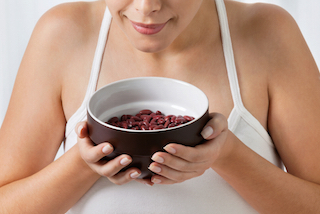 In the last installment of this blog, I showed that adding beans to your diet can improve your health in many ways, such as lowering the risk for cancers, improving blood sugar, helping your intestinal flora and slowing the aging process. Yet despite these clearly-documented benefits, many are concerned about beans. These concerns stem mostly from ideas set forth by the paleo community.

The paleo take on beans is that humans did not consume beans until our more recent history, say 8,000-10,000 years ago. The argument continues that this timeframe would not allow us to adapt to beans. They also claim that beans have phytotoxins that can damage our intestinal lining, trigger autoimmune disease and take nutrients out of our bodies. A further problem is that many people who have avoided beans now notice digestive symptoms if they add them back into their diets, even if they never had issues before. Let's look at these concerns one by one.

When Did Humans Start Eating Beans?
Domesticating beans, drying them and cooking them at a later time did likely emerge within the last 8,000-10,000 years. However, human ancestors have eaten large amounts of the types of plants that include grains and beans for at least 1.2 million years. [1]

How Fast Do Humans Adapt to New Foods?
The newest perspectives on human evolution show that measurable genetic change can happen in as little as 200 years. [2] That does not take into account the new science of epigenetics, which shows that diet can modify our genes within a single individual's lifetime. Several thousand years is definitely long enough for adaptation.

Are Beans a Unique Source of Phytotoxins?
Beans do contain many naturally-occurring chemical defenses, such as oxalates, lectins, phytates and saponins. These phytotoxins are there to protect the nutrient-dense seed of a bean plant from being easily eaten by insects or destroyed by fungi. These same phytotoxins, along with many others, are found in higher amounts in foods like kale, chia, parsley, spinach, coconuts, chocolate, almonds, carrots, coffee and broccoli.

If that is not enough, domesticated meat, as well as game meat, also contains phytotoxins based on which plants the animal ate during its lifetime. [3] Beans are not unique and are not even the highest source of phytotoxins. Ironically, the only way to be free of phytotoxins is to eat a diet based on synthetic and processed foods. I would not advise this.

Do Phytotoxins Cause Harm?
Remember the cancer-reducing benefits of beans? The phytotoxin IP6 is likely the source of these good properties. We are healthiest when our diets have a wide variety of plant foods rich in beneficial, naturally-occurring phytotoxins. [4]

"But I Can't Digest Beans"
Our intestinal flora is adaptable, but it does take some time to respond to change. Beans are rich in a compound called stachyose, which is loved by good bacteria like lactobacilli. [6] If you do not consume beans, your good lactobacilli may get crowded out by less-beneficial bacteria. When you start feeding them, they do regrow, but at first, this can cause gas and bloating. If you have avoided beans, just add them into your diet slowly. Try 1 tablespoon daily for a few weeks. Most people can then eat them more freely.

There are many packaged, non-food items that are worth avoiding, but don't be afraid of real foods. Life gives us enough worries we can't avoid.