If you're a Disney fan, you know all about "Even Stevens." The series, which followed the hijinks of a family living in suburban Sacramento, California, was considered a launching pad for Shia LaBeouf's career. It also introduced us to the fan-favorite character Bernard Aranguren, aka Beans. He was the Stevens' slightly nosy, bacon-loving neighbor who was always getting into trouble.

After 65 episodes and a movie, the series came to an end in 2003. Since that time, LaBeouf's career has blown up, causing the actor to gain a lot of unwanted attention as well. But whatever happened to Beans?

Well, we found out. Steven Anthony Lawrence, the actor who played Beans, recently spoke with HuffPost Entertainment about his life and times.


What have you been up to since the show?
I did "Kicking and Screaming" and "Rebound." Been doing a bunch of commercials lately. What I’m doing now is actually teaching mainly. I get a really big kick out of it. I’ve done a bunch of seminars at USC, I’ve done one at Berkeley, one at Pepperdine and a couple here at the high schools here in town in LA.

When did you start teaching?
I started that maybe a year ago. Oh, God, I love it. The kids are great. It’s almost like working the stage. It’s instant gratification when something clicks for a student. It's mostly technique of acting and kind of the business of the business.

How was it working with Will Ferrell on "Kicking and Screaming"?
I totally fangirled when I met Will Ferrell. And he turned out to be down to earth actually. One of the nicest guys I’ve ever met. I remember he had his first kid when he was shooting, and a couple days after the kid was born, Will brought him to set, and asked if I wanted to hold his kid. I’m going, “Whoa! Uh, yes, Will Ferrell. I’ll hold your child.”

Do fans still recognize you from "Even Stevens"?
Actually, oddly yes. It’s really weird. I feel like I’ve changed so much when I look in the mirror. I don’t know how people even barely recognize me. But I’ll be walking down the street and people drive by for two seconds and automatically they’ll go, “Oh, my God! You’re Beans! Ahhh!” God, even I would have to at least do a double-take. 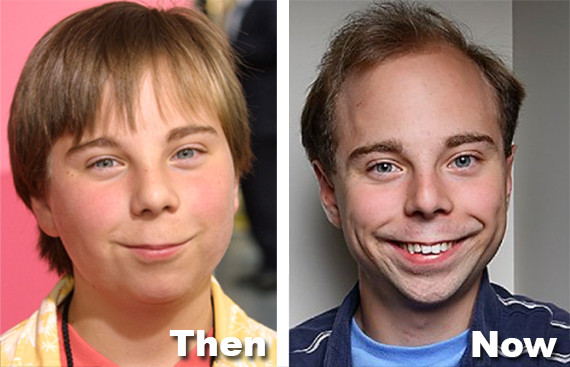 Did you see Shia’s career launching into what it is today?
Oh yeah. We really got to see this guy blossom into this actor and see him grow up ... I know [there's] a lot of publicity -- PR problems I guess you could say -- but I know Shia. You know, he has the biggest heart in the world.

What was it like working with him?
When I was doing “Even Stevens,” I was actually living in Fresno, California. About three-and-a-half hours north of Los Angeles. So when we were doing the show, I was living in a motel room five days a week, and I had to be back home during the weekend. My dad would, you know, God bless his heart, drive me back-and-forth, giving up his life to help me. So obviously that isn’t exactly cheap. So a lot of the money I made from "Even Stevens" went to just doing that. So I remember one year the first original Xbox came out. And, you know, money was a little tight that year. So Shia took it upon himself to buy me one.

Wow, that's so cool.
Yeah, it was really cool. He’s just a nice guy. That’s the kind of stuff Shia does. He has the biggest heart in the world, and he’s a big goofball. Always has been. But the guy’s heart is huge.

So is your favorite food really bacon?
No, not bacon. [Laughs] I'm out here in Los Angeles, so I'm spoiled with some pretty damn good Mexican food. No, it was just the character. It was the last day of the first week of my first episode, and one of the writers came up to me and said, “Hey, Steven, by chance do you like bacon?” And I was like, “Yeah, I like bacon. You know, I like it as much as the next guy.” They’re like, “Okay, cool.” So after that, yeah, it was just bacon, bacon, bacon, ad nauseam. Like, I honestly couldn’t eat it for two years after the show ended just because of how much I ate it.

Why was Beans never home?
I don’t know. That’s a good question. Even I don’t know that. People have speculated Beans had a rough childhood or something was going on at home, but I don’t know. It’s Disney Channel, man. You know, we try not to get that heavy.

What was the audition like?
My kind of shtick when I was a kid auditioning was to, like, do a joke. Like, either before or after the audition to kind of set me apart. So I did a joke about pirate ships my first callback, and I get a script for my second callback, and I see that my joke had been written in the script.

Did the cast ever play jokes on each other?
Oh, yeah! [My] first episode of "Even Stevens," he goes, "Beans, this is what happens when you become a man." And the camera never actually shows what Shia drew on that freakin' pad. [Laughs] Let’s just say it’s not very Disney appropriate. Let's leave it at that. You can use your imagination.

Could Donnie Stevens really outrun a car?
That was actually an inside joke in the show ... the answer is "no." His nickname was chicken legs on the show. [Nick Spano] was really barrel-chested. He really worked out up front, but his legs were really, really tiny. Tom Gribalski on the show [actor Fred Meyers], he’s like a world champion black belt. That's what he does. He teaches karate to kids, you know. So they were always peacocking each other. So that was his nickname for Nicky was chicken legs.

What do you remember most from working on "Even Stevens"?
It was so fun. Every day, it honestly was. It was like a family. You know, you see the same people twelve hours a day, five days a week, for years. You’re gonna get a little close to people, you know. It was really, really sad when the show ended. Everybody cried. It took so long to make through the last scene just because people kept crying.

Do you keep in touch with the other cast members?
Yeah, I keep in touch with most of the people, of course. Over Christmas break, my grandma and I were watching Christy Carlson Romano in her new lifetime movie. Yeah, it was so weird seeing Christy as this crazy person. [Laughs] She’s such a sweetheart in real life.

What would Beans be doing today?
I think he’d still be with Louis somewhere. I think he would’ve figured out a way to leave with him. He’d obviously be a bacon chef of some type. Oh, no! You know those Beggin’ Strips? With the dog who’s like, “It’s bacon!” Yeah, he’d be doing the commercials for Beggin' Strips, obviously.

Do you think a reunion show could ever happen?
I don’t think anything is out of the realm of possibility. I know Disney is doing the new “Girl Meets World” now. So you never know. Maybe Beans grows up and he has a kid who was like him when he was Beans, or something. You never know.

Child Stars: Then And Now