Cinder is a pretty fitting name.

After a bear cub survived a wildfire in Washington state last week, she limped up a man's driveway before collapsing on the ground. Though Methow Valley resident Steve Love had lost some of his property in the blaze, he did everything he could to save the baby bear, who appeared to have some serious burns.

Speaking to local outlet KOMO News, Love explained how the bear gradually warmed up to him after he settled near her and spoke in a soothing tone. He was able to get the cub, who had become separated from her family in the fire, to eat some apricots from a nearby tree and drink some water.

"Later in the evening, she was lying down making pitiful whimpering noises," Love told the outlet. "I got about six feet away, sat down and talked to it in a soothing way, telling it things would be okay. It seemed to make it feel better. It stopped making the noises."

A wildlife officer reportedly came to retrieve the yearling the next day, and a state biologist took over care of the third-degree burns on her paws and the more minor burns on her face and chest. Due to the seriousness of the cub's injuries, it was determined that she needed more intensive care.

That's when animal rescue nonprofit Pilots N Paws stepped in and offered to transport the cub to a wildlife care facility near Lake Tahoe in California. 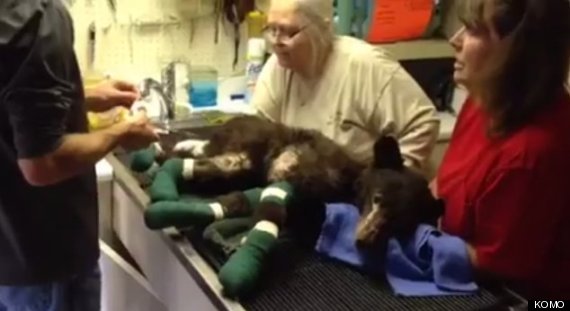 The bear's burns were tended to by caring professionals.

"I [got to] give a shout out to the guy who found her 'cause from what I understand, his home was destroyed," Bill Inman, a volunteer pilot who flew the bear to Lake Tahoe Wildlife Care, told California's CBS 13. "After having to face that, he rescued her and I think that’s really cool."

Nicknamed Cinder, the cub will now undergo rehabilitation at the facility until she's fit to be released into the wild. She is the 10th black bear to be taken in for treatment at the Lake Tahoe Wildlife Care center this year, The Tahoe Daily Tribune reports.