CHICAGO (AP) — The Chicago Bears' game against the Baltimore Ravens has resumed after being delayed about two hours because of a torrential downpour.

Play was stopped with 4:51 left in the first quarter. Baltimore's Justin Tucker had just kicked a 52-yard field goal to make it 10-0 when fans were ordered to seek cover.

Players stayed on the sideline for a few minutes before heading to the locker room as heavy rains and strong winds hit.

There were reports of at least one tornado touching down in Illinois and extensive damage in parts of the state. At Soldier Field, long lines formed in the upper deck as drenched fans tried to make their way toward the tunnel with lightning striking near the stadium.

The rain was so heavy it looked as if the Chicago skyline was gone. Fans in suites and reporters in the press box were ordered to move away from the glass. At one point, a spectator ran across the field and got tackled by about three or four security guards before being escorted away.

Fans were finally allowed to return to their seats when the skies cleared, and they let out a big roar when Bears players started trotting onto the field three minutes later.

Prior to the delay, the Ravens got off to a good start — particularly the struggling Ray Rice.

Bothered by a strained hip flexor and averaging just 2.5 yards per carry coming into the game, he broke off a 47-yard run to the 10 on Baltimore's first possession and ran it in from the 1 to make it 7-0 after Chicago's Chris Conte got called for interference against Ed Dickson in the back of the end zone. Tucker added to the lead with that big kick on the Ravens' next possession. 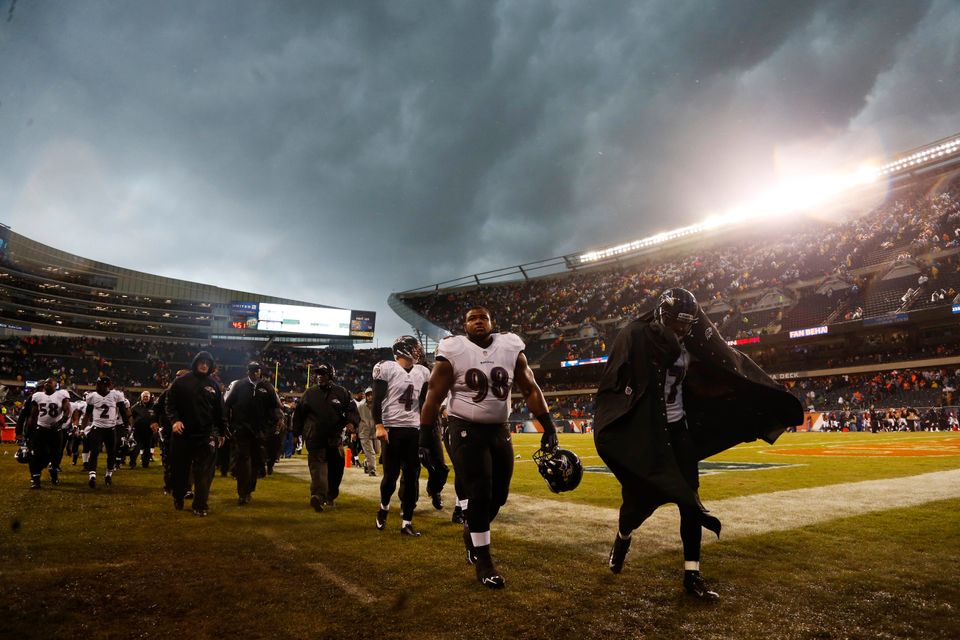 1 / 27
Baltimore Ravens players leave the field as play was suspended for a severe thunderstorm blowing through Soldier Field during the first half of an NFL football game against the Chicago Bears, Sunday, Nov. 17, 2013, in Chicago. (AP Photo/Charles Rex Arbogast)
AP