This article originally appeared on artnet News.
By Christie Chu 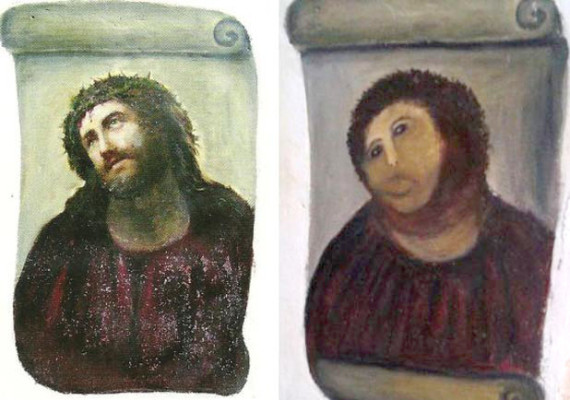 In 2012 Cecilia Giménez, an 83-year-old widow and amateur painter, attempted to restore Ecce Homo, an almost century-old fresco of Jesus crowned with thorns in her local church in Borja, Spain. (See "Restorer Behind "Beast Jesus" to Star in Music Video").

Despite a valiant effort, the tragically failed restoration went viral and Giménez's attempt was met with mockery and scorn. Images of the botched fresco swirled around Twitter and Facebook, inspiring a slew of memes and parodies now found on the Internet.

But, two years later, the village has reassessed their attitudes and turned their ridicule into gratitude, reports the New York Times. The viral images and memes gifted the rural town with free publicity—150,000 tourists from all over the world came to see Giménez's artistic endeavor and visit the sanctuary overlooking Borja.

“Why are people coming to see it if it is such a terrible work of art?" asked Andrew Flack, an opera librettist who traveled to Borja for research on a new production. “It's a pilgrimage of sorts, driven by the media into a phenomenon. God works in mysterious ways. Your disaster could be my miracle."

A much-needed bolstering to the sleepy local economy ensued with restaurants opening and local and neighboring museums reporting the highest rates of visitation from the spill-over of tourists.

“The impact of Ecce Homo has been really great for businesses," said Mr. Baya, a restaurateur who has done well enough to open a second restaurant. “Sadly, everyone heads to look at a painting that, frankly, is ugly."

However "ugly" the fresco may be, Ecce Homo is stamped on the town's lottery tickets and nearby vineyards are fighting over the right to use the image on wine labels. It's even gotten plum positioning in a Spanish film in which thieves attempt to steal it.

artnet News is the world’s first global, 24-hour art newswire, dedicated to informing, engaging, and connecting the most avid members of the art community with daily news and expert commentary.