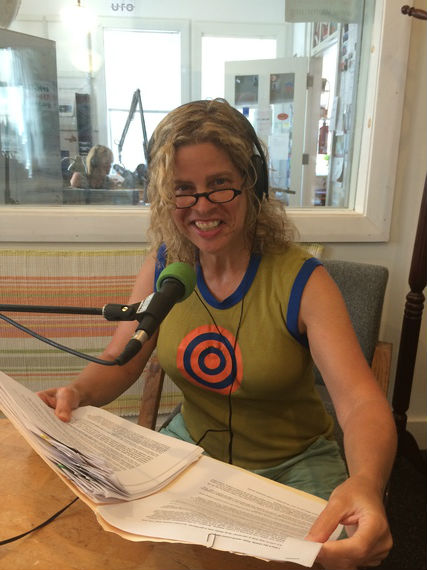 I used to run past construction sites in NYC, as the workmen whistled and shouted out a list of catcalls that went from "Rambette ... to "Beat me up, baby!" I suppose this was their reaction to my having embraced the women's bodybuilding craze of the 1980s.

No matter, it was a small price to pay to looking like the female compatriot to Conan the Barbarian. This was years before Xena.

I would eat tuna fish in water or poached chicken, followed by a handful of amino acids, then work out 6 days a week at a hardcore gym called Better Bodies.

After the sun went down, I would spark up my first Marlboro Light and go to my evening job as the bartenderess at a bisexual coke snorting bar and grill called Trivia. My preferred uniform allowed me to show off my Better Bodies bod; black jeans, black bra, tuxedo vest and a black bowtie.

Yes, honeys. I was rolling in tips.

But on the 14-block walk home, I would hear it from every other guy I passed; a whistle, a kiss. The polite ones simply said, "good evening." But this was after midnight; the only polite guys I passed were in drag.

So I got used to it; raised my shoulders somewhere around my ears, added pepper spray to my keychain and dropped the occasional "F off!" as needed.

Then the years trickled by. I gave up the martini shaker for the whisk, body-building for a thrice-weekly 20 minutes on an elliptical, followed by a smoothie with more calories than I'd just burned off.

I failed to notice that the catcalls had dwindled until one day at a construction site on 14th Street. As I walked past a crew of Con Edison workers, one of them stood up and said, "Good afternoon, ma'am!"

I stopped dead in my tracks.

When did I become a ma'am?

After I turned into a 40-something babe, I took a trip to Italy. I was well warned about how incorrigible the Italian men could be especially to blonde women, but I was ready for them. After all, I had my New York attitude.

Five days in, and not a peep.

Finally after taking the long way back to my hotel, I finally heard it, "Ciao Bella ... moi moi (kisses being blown)."

I turned to see what I thought would be an Italian Adonis, and in his place was an 80-plus-year-old man, steadying himself on a walker.

Dear lord! Does this mean only the octogenarians think I'm hot?!

After that painful Italian eye opener, I could no longer ignore the obvious. It wasn't as though I ever liked being catcalled by strangers, but I kinda missed, well, the validation.

I still had the truck driver walk that had earned me a hundred catcalls in the past, but now guys seemed to rarely notice. On one odd occasion that they did, a guy in a tool belt shouted out, "Bad day?"

"Whatever!" and he wished he'd never bothered the mean girl on East 4th Street.

So I turned 50 and then 51, and like a gift from the almighty I was blessed with what I call "I-don't-give-a-hoot-itus."

OK, first of all, I like girls, THANK GOD! And they still seem to think I'm relatively cute. Women can be so much more forgiving of a little bit of cellulite.

But secondly I have been able to channel my own inner mojo!

I look in the mirror and USUALLY (I said usually) see a proud, life-weary, accomplished babe with pretty blue eyes and curly blonde hair! Okay sometimes I see a tired, evil babe with red eyes and greasy hair, but we're talking about usually.

All the young babes in my hood seem to be fueled by catcalls. They stand up taller and walk prouder.

"Yeah, mami! Shake it!" can make their morning.

Me? I'm chopped liver with a strut! But I don't need it anymore! I have my own mojo! OK, I said usually!

The other day I was walking through Tompkins Square Park in the East Village, past the northwest corner where the chess players, drug dealers and homeless guys hang out.

A fiftyish black man, clearly homeless, clearly stoned and wearing a pair of Mickey Mouse ears on top of his very dirty head shouted to me.

"Blondie!! Beautiful, where you going, baby!"

I turned around to make sure there wasn't a 20-something gal with a big booty behind me.

Then I shouted back, " Gotta go to work honey! That rent thing!" and kept walking.

On the way out of the park, I smiled.