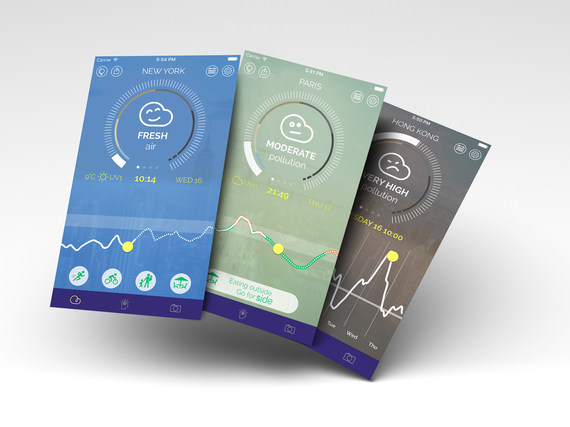 Extreme heat waves are happening with alarming regularity. Summer used to be the time for kids to be outside non-stop. Now, both children and adults need more information on how to protect their health from a wide range of pollutants in the air.

Plume Air Report is my go-to tool. There are others, but Plume is my favorite. It is available free as an iOS and Android download.

Innovator, Romain Lacombe, is the founder and CEO of Plume. He has a varied background which includes environmental economics, math, banking, a stint in Silicon Valley, and a Fulbright scholarship. Open Data, which is a key premise behind Plume, is one of his top concerns.

During the COP21 conference in Paris, Lacombe co-organized the international event "Data Against Climate Change." He believes that data can boost "climate innovation," as well as serve as an instrument of assessment and evaluation.

Equally important for Lacombe is delivering to users a drill down on pollution history for specific areas via "geolocation." This illustrates hourly shifts, and daily comparisons to annual levels. Lacombe defines this as "making the air more transparent."

Plume's World Air Map collects beyond 500,000 data points every day from 11,000 stations, in order to build "predictive models" for over 200 metro localities. For those vicinities without a station, a combination of Artificial Intelligence and data science can estimate air pollution levels on a 60-minute basis. Emissions become a concrete entity, "democratizing access to environmental information." 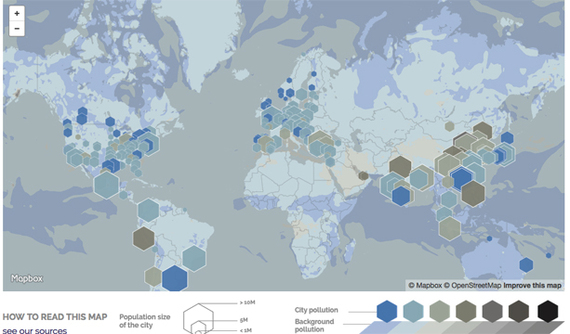 The map contains hexagons of different sizes and colors to demarcate city population size (from 1 million to 10 million), and city pollution (from black indicating a Plume index of +300 to two shades of blue ranging from 0-20 and 20-50). Twenty countries are listed alphabetically; 150 cities cover North and South America, Europe, and Asia.

In the morning, I have a Plume Index Air Quality message waiting for me, with information about the current level of pollution. Living in New York City, change can be dramatic from day to day, and even within a 24-hour period. The more polluted the air is, the higher the number.

Individuals can set their level of sensitivity as Low, Normal, or High. Favorite activities to check in on are represented by icons symbolizing running, bicycling, going outdoors with young children, and eating outside. With the hourly breakdown, it makes it easier to plan activities. You can also be informed of the temperature and the UV Index. The primary pollutants of ozone, particulate matter, and nitrogen dioxide are noted, and compared with mean yearly averages. At times when pollution is HIGH, I am advised to "Take it easy" with almost everything. I even get a special message stating: "IMPACT IF CHRONIC EXPOSURE. The air has reached a high level of pollution. Higher than the maximum limit for 24 hours established by the World Health Organization (WHO)."

You don't have to be a geek to appreciate the deeper look into air pollution that Plume makes available. Clicking on the "head icon" with the brain center brings you to a series of concise evaluations about pollution specifics including:" What is it? Where Does It Come From? What are the risks?"

In the section Everything You Should Know About Pollution, there is information on the "inversion layer," which traps pollutants. I particularly liked the descriptions of frequently used terms like Nitrogen Dioxide, Ozone, Sulphur Dioxide, Carbon Monoxide, VOCs, and Particulate Matter. Many people are familiar with the verbiage, but don't always fully grasp how or why their health is impacted.

In 2015, during the month of March, Paris hit a calamitous concentration of air pollution -- beyond the numbers of Beijing. Plume Labs informed the French government of the circumstances. In response, officials took steps to cut vehicle traffic by 50 percent for a full day.

Lacombe has written: "Air pollution is an invisible enemy, but we can fight back: actionable information helps limit our exposure, improve our health and well-being, and make our cities breathable."

Each year, air pollution leads to almost 7 million deaths around the world. It is presently the world's fourth-largest health threat. If we want to avoid the highest level of pollution on the Plume scale, Airpocalypse -- where everyone is advised to stay indoors a consideration of how serious a problem air pollution is must be addressed.