You know those stickers, "I voted today," "I donated blood today"? I'd like one that proudly proclaims, "I had a colonoscopy today!" I'd wear it everywhere -- on the street, at a restaurant, at a gallery opening. I suppose I'm wearing it right now, at the global soiree that is the Internet.

Though it's been dubbed "the cancer you can beat," I've lost three close relatives to colon cancer -- my mother, my uncle and my youngest brother, Alex, when he was only 19.

Not surprisingly I've become an evangelist for preventive screening, and as I write this am still woozy from anesthesia following a colonoscopy this morning.

Physician-geneticist Dr. Francis S. Collins, director of the National Institutes of Health, sums up the latest good-news, bad-news statistics in a special report on cancer in America in this week's Parade magazine:

The incidence of colorectal cancer fell by more than one-third in the United States between 1985 and 2005 -- mostly because more people were screened for the disease.

Yet colorectal cancer remains the second leading cause of cancer deaths, claiming the lives of nearly 50,000 Americans each year. The vast majority of these cases could be averted or caught in an early, curable stage if people simply started getting regular screenings when they hit the age of 50 (or possibly earlier if a family member has had the disease). Indeed, about 45 percent of Americans 50 or older have never been screened for colorectal cancer.

I'm not yet 50, the recommended age to begin regular screenings, but given the strong history in my family, today's was my seventh screening. It's a biennial -- like the Whitney, I tell my art-world friends -- an every-two-year ritual that I embrace in spite of the yucky part, which is not the colonoscopy itself (30 minutes under sedation so you don't even feel it) but the preparation the day before (which takes several hours as a potent liquid laxative, a whole gallon of the stuff, works its way from the entrance of your digestive tract to the exit).

"Too much information!" I hear you saying.

But among my close friends and family, colonoscopy talk is as natural as making plans for dinner. Keeping it natural, counteracting the social taboo that still surrounds this disease, is crucial to its prevention and early detection. Silence borne of shame or ignorance can in fact equal death.

Promoting prevention is all the more vital in the absence of major breakthroughs in treatment. Hopes were high after scientists under the leadership of Dr. Collins, then head of the NIH's genome agency, finished mapping the human genome in 2000. But a decade of disappointment followed, as New York Times science writer Nicholas Wade reports:

Ten years after President Bill Clinton announced that the first draft of the human genome was complete, medicine has yet to see any large part of the promised benefits.

For biologists, the genome has yielded one insightful surprise after another. But the primary goal of the $3 billion Human Genome Project -- to ferret out the genetic roots of common diseases like cancer and Alzheimer's and then generate treatments -- remains largely elusive. Indeed, after 10 years of effort, geneticists are almost back to square one in knowing where to look for the roots of common disease.

I remember the day that this historic announcement was made: June 26, 2000. On the news, one expert after another predicted a revolution in cancer treatment, eventually even a cure. I didn't celebrate the news but lamented it. Just four weeks earlier my brother Alex had been diagnosed with advanced metastatic colon cancer, and all I could think was that this great discovery had come too late. 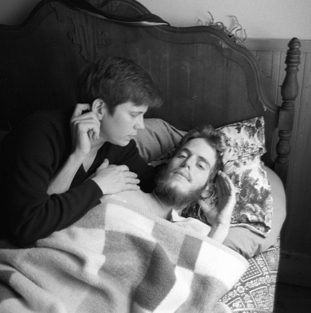 A decade later I find strange consolation in the fact that the revolution wasn't all it was cracked up to be. Alex didn't miss the boat after all. He died that December, one month short of his 20th birthday, but even today genetic research would not have saved him.

Survivors of all kinds -- of war injuries, car accidents, potentially fatal addictions -- often mark those anniversaries like birthdays. That's how I feel each time I emerge from a colonoscopy: renewed, and profoundly grateful for the years I've had that my loved ones didn't.

Advertisement
This photograph of me and my brother Alex was taken by a friend in 2000, and was included in the 2004 exhibition Alex {Amen} at the 18th Street Arts Center in Santa Monica, CA. I am currently working on a memoir about my experience being part of the circle of Alex's caregivers in the organic farming community where he lived and died.