With the latest release of Glassdoor's 2016 Best Places to Work awards, our economists decided to revisit one of our most popular studies, Does Company Culture Pay Off? Analyzing Stock Performance of 'Best Places to Work' Companies.

In that study, we asked a simple question. Do stocks of companies with high employee satisfaction outperform the market? To answer that question, we followed several portfolios of Best Places to Work award winners over the years and analyzed their performance against the S&P 500.

The findings were striking. No matter how we looked at the numbers, Best Places to Work winners were also great financial investments. Portfolios of companies with satisfied employees outperformed the overall market in five of the six years we examined, beating the return on the S&P 500 by as much as 122 percent between 2009 and 2014.

Looking Back at 2015
With another year behind us, we looked at how the 2015 Best Places to Work winners--announced in December 2014--fared against the overall market. It's no surprise 2015 returns have been lower than in recent years, but there is still a significant outperformance of an equally weighted portfolio of the 23 public 2015 Best Places to Work companies.

The overall market has been essentially flat in 2015, with the S&P 500 earning just 1.2 percent through November 18, 2015. By contrast, our portfolio of 2015 Best Places to Work winners would have earned 3.4 percent if purchased back in January--2.8 times the return of the overall market. 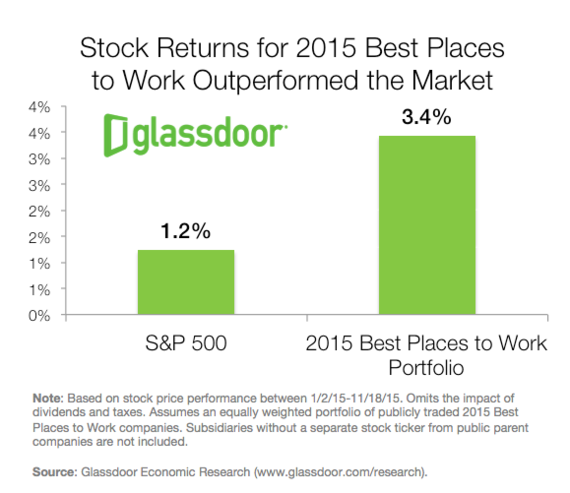 Some Details
Here's how we came to that conclusion. Among the 50 large winners of last year's award, we examined the 23 that were publicly traded for the full year (so far) of 2015. Companies had to have their own dedicated stock symbol to be included--no subsidiaries that didn't have their own stock ticker and no private companies.

Stock markets are closed on New Year's Day, so our analysis looks at stock performance as measured by price appreciation in daily closing prices from January 2 through November 18 of 2015.

The table below shows the details of the 2015 Best Places to Work portfolio we constructed. The highest performer was the visual computing and graphics giant NVIDIA, which had an overall employee satisfaction rating of 3.9 out of 5 stars and earned a scorching 54.1 percent stock return this year. 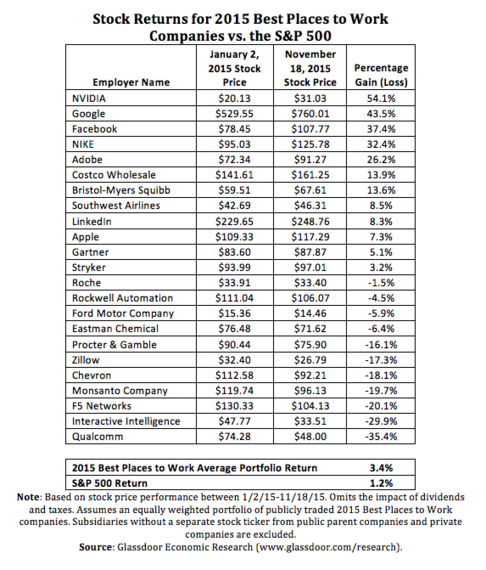 How Do 2016 Winners Perform?
Glassdoor just announced its new batch of winners, the Best Places to Work in 2016, and we wanted to see how the winning companies performed over the past year against the S&P 500. Given the financial performance of 2015's winners, we expected this year's winners to outpace the S&P 500 again.

Here's what we found. Among the 26 publicly traded companies on the 2016 list, the average stock return so far this year was 9.9 percent. Put differently, an equally weighted portfolio of 2016 Best Places to Work Companies--if purchased back in January--would have earned a 9.9 percent return. That's more than eight times the return of the S&P 500, and dramatically better than the 2015 list. 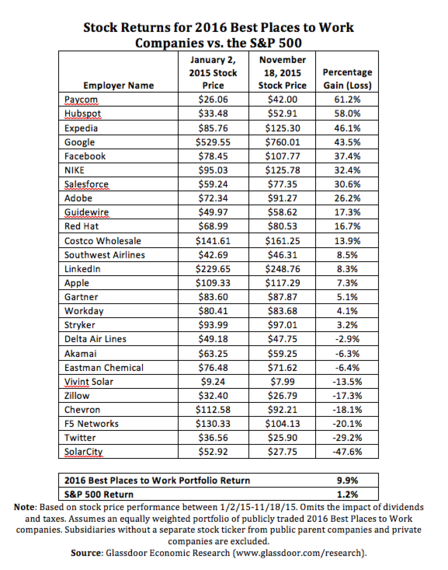 Further Reading
For more on the link between employee satisfaction and financial performance, see our full study Does Company Culture Pay Off? and accompanying blog post.

For a sample of recent academic research showing a causal link between employee satisfaction and company financial performance, see our blog post on the subject here.

Finally, for a broader summary of research on the link between employee engagement and company bottom lines, see our 2015 HR Tech presentation here.