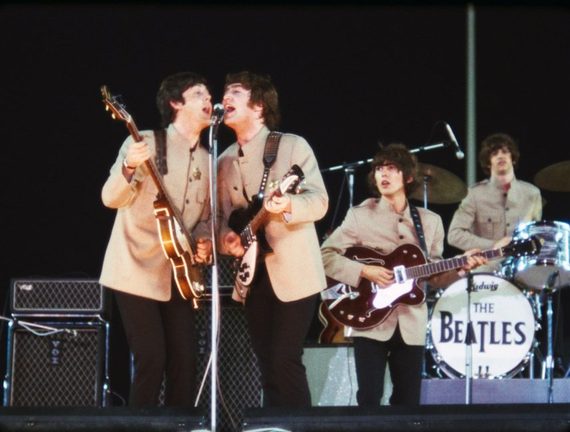 Beatlemania was an important cultural phenomenon that changed the course of postwar history. Millions of baby boomers across a 15-year age range, across the globe, were smitten by four charismatic lads who, through their music, attitude, wit, and intelligence, excited us, dazzled us, inspired us, and offered us a new way of being in the world. A constant presence in our lives as we moved through childhood and adolescence, the Beatles became a singular source of intellectual, emotional, aesthetic and spiritual nurturance, creating a relationship between artist and audience that was, and will always be, historically unique.

The word "Beatlemania" describes that unique relationship, and Ron Howard's The Beatles: Eight Days a Week -- The Touring Years, brilliantly captures its collective expression -- in all its ecstatic, life-affirming, youth ascendant, glory. Seeing this film, it's no wonder that people who saw the Beatles perform live consider it one of the peak experiences of their lives.

Howard's much anticipated documentary, intended more for the uninitiated than for hard core fans, is difficult to watch without smiling, even if you've seen much of the footage before, and even if you were dismayed by the colorization of some classic clips. Seeing the Beatles on the big screen, at their most robust, is always enthralling. The film's new bits, including interviews with Paul and Ringo, remind us of the Beatles' humor and quick-wittedness, and offer glimpses into the group dynamics and esprit de corps that fans, especially male fans, found so appealing. The film also highlights their change-making stance against playing for segregated audiences, thereby bringing some of the tumult of the times into the story.

The film succeeds in showing the band's journey to the Toppermost of the Poppermost and how unprecedented fame, security concerns, and fear of artistic stagnation made it not such a fun place to be. Beatle geeks, myself included, can point out the film's shortcomings, but the subject matter, and the obvious care and reverence of the production team, make those shortcomings easy to overlook or forgive. 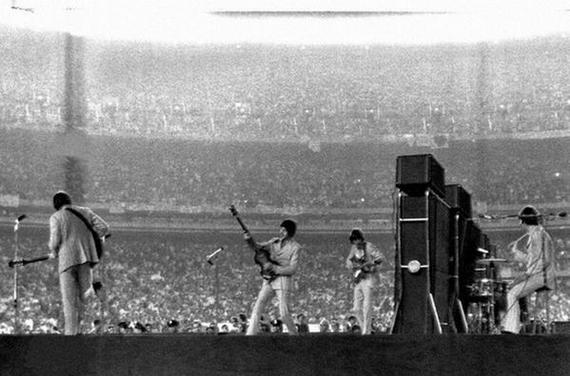 The film doesn't have much to say about why girls screamed and lost control -- a question of great interest back in the day. But those blissed out young women were more than just background and added more than annoying noise. Their bodies, pressed against wire fences or being carried out on stretchers, their transfixed eyes and tear streaked faces, tell the story of Beatlemania. Their behavior has important cultural meaning.

In researching Beatleness I learned that male fans saw the screaming as evidence of girls' lack of serious interest in the music. But as I show throughout the book, fans engaged with the music--and the whole Beatle experience--in gendered ways. Girls loved the sound and feel of the music, danced with their friends, and listened to the words. But they went to the concert to see the Beatles, to be part of the spectacle, and just maybe, to scream.

Anticipating a live Beatles' performance, female fans discussed with their friends whether or not they would scream -- not quite daring each other, but conspiring to do something uncharacteristically bold, expressive, and free -- something they couldn't do anywhere else. Some girls planned to scream, and did. Some said they wouldn't but lost their inhibitions in the contagion of the crowd. This behavior, dismissed as silly and unimportant for decades, becomes significant when seen in the context of the highly constrained and confining standards for public behavior of the time, especially for women. When the Beatles were touring, girls screaming in public was an act of defiance; not at all lady-like.

A Beatles show was the only public place where girls could feel that free and uninhibited. Girls screamed because they were thrilled to be in closer proximity to the Beatles, accepting their invitation to leave madras, loafers, crew cuts, and white gloves behind. Girls screamed because they felt that same mysterious sensation they felt when they heard these songs on the transistor radio under the covers before falling asleep.

Maybe the screams were a way of thanking the Beatles for the music and the mayhem. Or maybe girls screamed because no one offered them an electric guitar or organized sports -- outlets available to their brothers and male friends for self-expression and release of sexual energy.

If the screams were sublimating sexual energy, as many observers at the time believed, there was a subversive element to both the behavior and the unconventional object of desire. In the early days of Beatlemania, sociologist and cultural commentator David Riesman predicted the Beatles would be a short-lived fad, noting that, "They don't have the quasi-sexual, quasi-aggressive note that was present in Presley." Similarly, a critic at the Washington Post called the Beatles "asexual."

These male observers didn't understand that the Beatles represented a new kind of masculinity. A female fan, age 21 at the time, remembers: "We felt we could get along with them. They were not macho; not football types." Another, age 18 at the time, remembered, "All the guys said they were queers or fairies."

In Eight Days A Week, we can actually hear what the Beatles sounded like in concert, thanks to Giles Martin and his team figuring out how to reduce the screaming noise without tampering with the music. The Beatles' musicianship in the midst of the chaos was remarkable. And though the screaming fans are central to the story, no one prefers screams to music.

But sitting at the edge of her seat, in the safety of her friends and the righteousness of her love for the Beatles, each girl's scream came from deep inside and meant something personal. Collectively, their voices made a powerful and historic statement. The clear message -- the loud and clear message -- was that they like men who look and act like the Beatles. Eight Day's A Week beautifully captures the start of a cultural conversation about gender that continues to this day.