The Beatles were certainly known for adding layers of experimental and uncommon noises to their recordings. But to find the most in depth Easter eggs hidden within the Beatles music, The Huffington Post sought out super fan Mike Brown, who has maintained arguably the most in depth list of Beatles anomalies since the '90s. Brown's website What Goes On, which has had a web presence since around 1997 as Brown recalls, has detailed recording notes on just about every Beatles song. Over the years, about 400 people have helped contribute to the database.

This list of anomalies even precedes Brown, as he inherited everything from a Beatles fan named Michael Weiss, who first publicly distributed it in 1992 on USENET, before the "world wide web" was prevalent. Asking how he has continued to find all these Beatles anomalies over the years, Brown explained:

Most now come from submissions -- things I hadn't noticed or considered to be that odd until highlighted. But for those that I spotted -- just listening to the stereo vinyl/CDs in detail. In recent years, the availability of Dolby 5.1 Surround remixes for some tracks has opened up the ability for people to really hear stuff in detail that I was listing years before.

Jan. 30 is the anniversary of the Beatles last public performance -- a 45-minute gig on the roof of their Apple Records headquarters in London in 1969 -- here are some fairly deep-cut and often funny Beatles Easter eggs. A few of their classic songs may have been way dirtier than you remembered ...

1. The Beatles purposely pronounce "Sie Liebt Dich," the German version of "She Loves You," incorrectly. This essentially makes the song "She Loves Dick."

The Beatles recorded German versions of both "She Loves You" and "I Want To Hold Your Hand" in 1964. For "Sie Liebt Dich" the band completely mispronounced "dich" as "dick," a mistake that seems suspicious since The Beatles spent years in Hamburg.

On Mike Brown's "She Love You" entry, he explains, "I'm sure Paul and John knew that "Dich" is not pronounced as "Dick" but the boys are clearly singing 'Sie Leibt Dick. Ja! Ja! Ja!'" Brown further told HuffPost:

Brown: Is that an intentional little joke? I think they probably knew, and just tried to slide it past the establishment. They spent long enough in Germany to have picked up the correct pronunciation.

The American version might have a dirty element to it as well. Brown writes that The Beatles actually might be singing something other than the official lyrics:

"Sounds like 'She loves you, She'd love to, She loves you,' as opposed to the official lyrics! If these are the lyrics being sung, it's just their naughty little joke. 'She'd love to, and you know that can't be bad, wink, wink ...'"

2. When Paul McCartney sings about laughing over dinner in "Lovely Rita," a subtle pop is made to signify a cork. 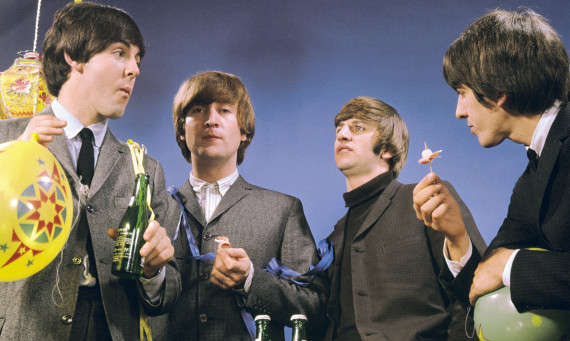 The popping is pretty subtle, but Mike Brown believes it to be on purpose, writing in his "Lovely Rita" entry, "The pop after 'over dinner' -- this is very much intentional, and represents the cork popping over dinner."

The book Sgt. Pepper and the Beatles: It Was Forty Years Ago Today also references the cork popping:

"In addition to these straight vocals, some comical devices were added ... There is imitation of a champagne cork popping (on the phrase 'over dinner' at 1'27") using cheek finger popping."

The line is very quiet compared to the rest of the song, but by cranking the volume a bit, John Lennon's voice come through clearly. As Mike Brown explains in his "For You Blue" entry, the song is "introduced with John saying "Queen says 'No' to pot smoking FBI members." It is curious, in that this was edited in here deliberately." Brown explained further to HuffPost:

Brown: I think that was just Phil Spector adding character to things. I don't know why that line is of such significance. 'Let It Be' was supposed to be a "live" back-to-basics album. It ended up more heavily "produced" than the original concept, so adding bits of banter like that may have been part of de-studioing it.

4. George Harrison and Paul McCartney harmonizing "tit tit tit tit" in the background of "Girl" was a dirty joke. 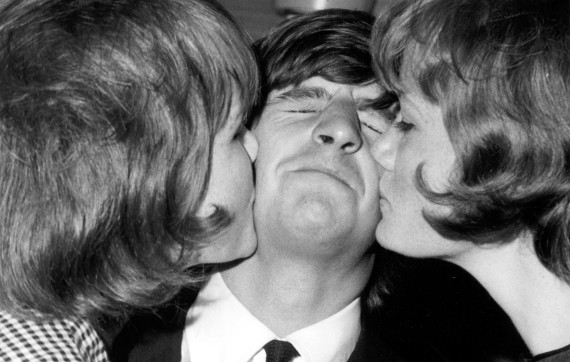 You'd think it'd be obvious that a "tit tit tit tit" harmonizing on a song called "Girl" was a dirty joke, but this usually goes unnoticed. The Beatles Bible points out that Paul McCartney is quoted in the book, Paul McCartney: Many Years From Now, talking about the origin of the joke:

It was always amusing to see if we could get a naughty word on the record: 'fish and finger pie', 'prick teaser', 'tit tit tit tit.' The Beach Boys had a song out where they'd done 'la la la la' and we loved the innocence of that and wanted to copy it, but not use the same phrase. So we were looking around for another phrase, so it was 'dit dit dit dit,' which we decided to change in our waggishness to 'tit tit tit tit,' which is virtually indistinguishable from 'dit dit dit dit.' And it gave us a laugh.

It was to get some light relief in the middle of this real big career that we were forging. If we could put in something that was a little bit subversive then we would. George Martin might say, 'Was that "dit dit" or "tit tit" you were singing?' 'Oh, "dit dit," George, but it does sound a bit like that, doesn't it?' Then we'd get in the car and break down laughing.

That "fish and finger pie," McCartney mentions is from "Penny Lane." Mike Brown talked to HuffPost about the "four of fish and finger pie" line and explained McCartney has been pretty open about the dirtiness of that line saying, "Paul acknowledged [the line] as 'a bit of smut, for the lads' if I recall correctly!"

5. Near the end of "I'm Only Sleeping," someone almost inaudibly commands "Yawn, Paul." Then McCartney yawns. 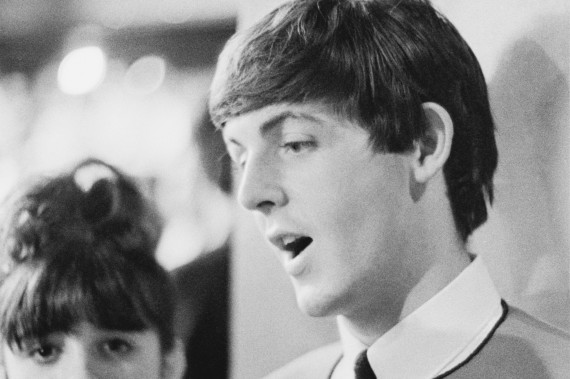 Beatles Music History! believes this muddied command is made by John Lennon and explains further:

"Paul’s ‘yawn’ was added just before the last bridge, preceded by John’s instruction 'yawn, Paul' which can quietly be heard in the finished recording."

Mike Brown's entry for "I'm Only Sleeping" also points out the moment, stating that a "voice says "Yawn, Paul," and at 2:01, he does!"

BONUS: There is supposedly an accidental "undeleted expletive" in "Hey Jude" that doesn't get censored out.

Mike Brown told HuffPost that he first noticed this expletive "after seeing the cryptic reference to it in Mark Lewisohn's Recording Sessions book." Brown further said:

Brown: I think one of the funniest has to be the "undeleted expletive" in "Hey Jude." Mainly because it's probably the most played record in the history of the planet (I may have made that up), but radio stations seem to be oblivious to John swearing away in the background as he fumbled the acoustic guitar part ... Some people think it's Paul, fumbling on the piano. But I'm not convinced on that. I'd love to hear a clearer version of that backing.

It's a bit hard to hear (which explains why radio stations play the song uncensored), but it does sound like someone says "wrong chord" and then shortly after shouts "fucking hell" in the background.