One woman is being deemed a true heroine after witnessing a hit-and-run accident and chasing after the driver in Santa Ana, Calif.

Eloisa Madrigal, 45, and her two young daughters were walking in a marked crosswalk when they were hit by a car and thrown about 60 feet in the air as the driver fled, the Los Angeles Times reports.

Madrigal's 5-year-old daughter, Osmara Meza, was declared dead at the scene, according to the news outlet.

Beatriz Jimenez, 29, witnessed the hit and run and followed the driver, Jessica Louise Cowan, the Orange County Register reports. In her Honda Civic, Jimenez eventually trapped Cowan's Lexus IS, cutting her off until police arrived.

"I got out of my car and I asked her, 'Do you know what you did?' And she shook her head," Jimenez told the Orange County Register. "She showed no pain or guilt ... it looked like she didn't care."

Madrigal remains in critical condition and her 6-year-old daughter, Grecia Meza, is also recovering from traumatic head injuries, according to ABC.

Santa Ana Police Cpl. Anthony Bertagna told the Los Angeles Times, "We consider her a hero. If she hadn't done this, we'd still be looking for the suspect, and who knows who else she would've hit."

Jimenez, a mother of three, explained that witnessing the crash made her think of her own children.

"They say I'm their hero, but I don't see it that way," Jimenez told the Register, "I just didn't want the driver to get away without paying for what she did."

According to the Orange County District Attorney, Cowan, 33, was charged with one felony count each of murder, driving under the influence of alcohol, driving with a blood alcohol level over .08 percent causing bodily injury, hit and run causing injury and sentencing enhancements and allegations for having a blood alcohol level over .20 percent and causing bodily injury. She also had a a canister of medical marijuana on her dashboard, according to the O.C. Register.

If convicted, Cowan faces a maximum sentence of 15 years to life in state prison.

The Santa Ana Police Foundation has set up a fund asking for donations to aid the family. Learn more here. 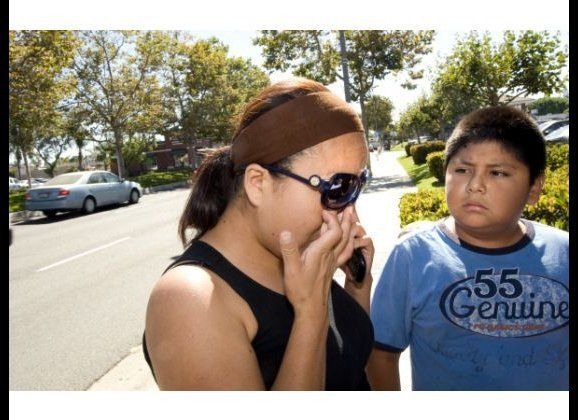 1 / 17
Heroine Chases Driver After Tragic Hit-And-Run
Jose Mora, 11, watches as his mother Beatriz Jimenez tries to compose herself after visiting a memorial along Santa Ana's 17th Street for 5-year-old Osmara Meza on Tuesday.