Science, not politics, needs to guide decision-making in America's extreme, remote, and fragile Arctic Ocean. If we are to avoid irreparable harm to an ecosystem found nowhere else in the country, we need to develop a comprehensive research and monitoring plan and set aside significant areas for protection.

In August, the Obama administration granted tentative approval for industry to drill four exploratory wells over the next two years in the Beaufort Sea off Alaska's northern coast. Earlier this month, federal officials affirmed a 2008 oil and gas lease sale that could open to development a vast area located in the even more remote Chukchi Sea.

The two seas are home to bowhead whales, ice seals, polar bears, and other marine mammals found nowhere else in the United States. These magnificent animals are uniquely adapted to the region's harsh sub-zero temperatures, shifting ice floes, and storms with hurricane-force winds and 20 foot waves. Yet these are the very conditions that make preventing, containing, or cleaning up an oil spill extremely challenging with existing technologies and procedures.

How would the noise, disruption, air, and water pollution that drilling would bring affect one of the world's last relatively untouched ecosystems? What would happen if an oil spill were to occur?

The short answer to both questions is: No one knows.

Decisions pending before the Obama administration involve actions taken in the previous administration, which sold leases granting access to an unprecedented 3.8 million acres of little-explored Arctic waters. But Interior Secretary Ken Salazar soon will be presenting a new five-year offshore oil and gas leasing plan that will govern lease sales from 2012 to 2017. 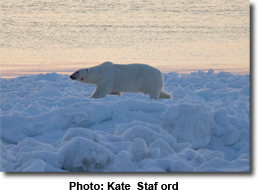 Secretary Salazar has repeatedly stressed the importance of science. A year ago, he asked the U.S. Geological Survey (USGS) to look into gaps in scientific research on the U.S. Arctic Ocean -- noting that:


All oil and gas exploration on federal lands must be conducted at the right place, at the right time, and in an environmentally sound way. In addition, I must ensure that our decisions, policies, and management objectives are based on the best available science. This is particularly true when considering increased exploration or production from new or frontier domestic areas that have not been subject to significant development.

When the USGS released its
report
Advertisement
in June, the
Pew Environment Group
, along with
Ocean Conservancy
Advertisement
, asked 14 respected, independent scientists -- all experts on the Arctic marine ecosystem -- to review it and recommend next steps. On September 26, we released a white paper with their recommendations. The
39-page study
assesses the adequacy of the USGS report and deems it to have done an excellent job in identifying the major gaps in scientific knowledge in an unbiased manner. The paper also emphasizes the need to connect the research that has been done in various disciplines in order to provide a better understanding of the ecosystem as a whole. And it calls for setting priorities on how to address information still missing. Recommended next steps include:
We need a timeout on new lease sales to implement the recommendations of the USGS and the independent scientists and to let oil-spill cleanup expertise catch up to drilling technology. The missing information identified in the USGS report and the next steps suggested in our white paper are vital for deciding how best to move forward in this sensitive marine ecosystem.