In 2012, a Harris Poll revealed that one in every five people report having at least one tattoo. This means that roughly 20 percent of us have a tat. More recently, a 2014 Pew Poll recorded that 23 percent of people have tattoos, with 38 percent between the ages of 18-39. This data marks tattoos as one of the trademark trends of 21st century millennials.

So what makes these permanent body modifications so appealing? I think the answer lies outside of statistical evidence and within the realm of emotional development.

It's no secret that millennials are constantly struggling with their sense of individuality. With modern media creating an unhealthy paradigm around what it means to be beautiful, with an emphasis on unrealistic body shapes, and with young women and men being bombarded with these trademarked concepts of beauty, we are constantly searching for something to give us a sense of personal identity, something that sets us apart. Our solution? Body modification.

The actual term "body modification" sound like we're taking a knife and branding ourselves or brutalizing our bodies. This is far from what we're actually doing. We are, in truth, creating art. We are painting our bodies with stories, with pieces of content that show the world the strength and endurance of our generation.

Regardless of your story, regardless of your reasons, tattoos provide a wonderful and endearing sense of identity. They are personal, mysterious and enlightening. Their meaning changes over time and their beauty continues to grow with yours.

So why is there still such a professionally debilitating stigma?

In 1991, an amazing discovery was made: Ötzi. Dug up in the Italian Alps after being discovered by a pack of hikers, this mummy has a whopping 61 black tattoos covering his body. Want to know the best part? He's 5,300 years old. That's right, you heard me. 5,300. That means that tattoos have been around for over 5,000 years.

While there are a lot of theories as to why the mummified iceman has these markings, the most feasible was presented by a group of researchers at the Research Academy in Italy: Ötzi's tattoos were for healing.

Because a vast majority of his body modifications were located near joints, possible injury points, and areas in need of medicinal healing or acupuncture therapy, the researchers are investigating the possibility of these ancient tattoos being used for healing and wellbeing.

So, if tattoos originated as healing mechanisms, when did the stigma manifest?

There is a wide variety of answers to this question, but I think one of the more prominent theories is found in the period of the ancient Greeks and Persians. Persians used tattoos to brand criminals and prisoners, and after centuries of cultural co-mingling, Greeks followed suit. The word "stigma" then became associated with the socially deviant in Greek language, and this attitude carried over to what has become known as the western stigma against tattoos.

While this little flashback may paint tattoos in a rather negative light, I think it actually creates a somewhat romantic picture of what tattoos are really all about.

In a culture where we -- as millennials -- are constantly battling social norms and misappropriated ideas, I think it's important that we find ways of expressing our individuality and personal dignity. Tattoos give us a way of expressing our social deviance in a healing, beautiful outward declaration of independence.

Tattoos separate us from each other while simultaneously giving us an emotional connection to the millions of fellow tattoo veterans. Modern, westernized tattoos are used to help people heal wounds, express ones' artful imagination to the world, and they allow people to find an inward appreciation for their strength and resilience as individuals. We are expressing our deviance while healing our souls and creating a beautiful network of art.

Tattoos are absolutely beautiful. No one tattoo is the same because no one person is the same. No one meaning is the same. As such, tattoos have become a wonderful expression of individuality.

We need to learn to judge someone not based on their tattoos, but on their ability to stand up to social norms and inaccurate ideals of beauty. Instead of judging tattoos, maybe we need to start judging people based on how they choose to represent themselves. There's a difference between a violent drug-dealer covered in body modifications and a young girl who has a tattoo of her deceased brother's birthday, or an older brother who has a matching tattoo with his younger sister. 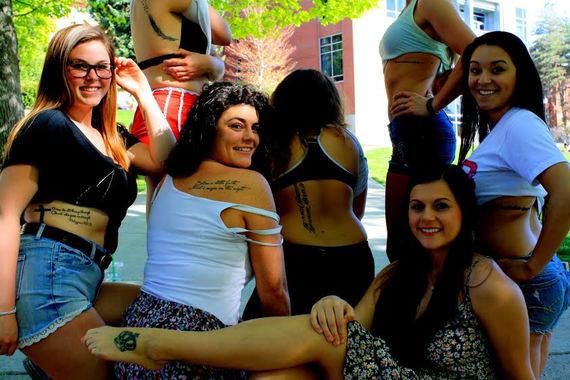 We who are tattooed are strong, independent, and unique. It's time society realized it.